On January 9, 2009, Tennessee Valley Authority confirmed another coal waste spill at its Widows Creek plant in northeast Alabama, less than three weeks after the enormous Tennessee coal ash spill at TVA's Kingston Fossil Plant. The spill, which TVA said originated from a gypsum treatment operation, released about 10,000 gallons of toxic gypsum material, some of which spilled into Widows Creek and the nearby Tennessee River.[1]

Gypsum ponds contain limestone spray from smokestack scrubbers, which trap sulfur dioxide emissions before they are released into the air and turn them into sludge and solid waste.[2] According to a TVA statement, the spill occurred at 6 AM when a cap dislodged from a 30-inch standpipe, releasing material from the gypsum pond into a settling pond, which then reached capacity and overflowed.[3]

An announcement from TVA said the company was installing booms in Widows Creek and the Tennessee River adjacent to the plant to contain the gypsum. The statement also said that TVA was performing permanent repairs to the standpipe.[4]

Scott Hughes, a spokesman for the Alabama Department of Environmental Management, said the spill was a one-time event, and that no additional gypsum material was being released. While the city of Scottsboro, about 15 miles downstream from the plant, gets its drinking water from the Tennessee River, Hughes said there had not been enough time for any contamination to reach the community. The agency sent a crew to the scene to monitor Widows Creek for effects on aquatic organisms. As of noon on January 9th, there was no evidence of any such impact.[2]

U.S. Sen. Barbara Boxer of California, who is a member of the Senate Environment and Public Works Committee, immediately called for a full review of all TVA's waste disposal sites.[4] 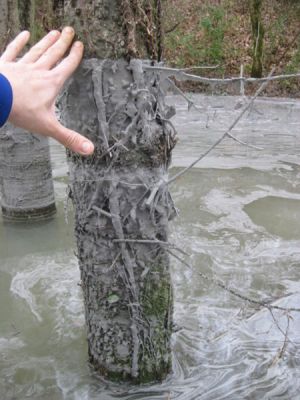 A thick, gritty coating of coal waste on the surface of the water and trees approximately 300 yards from the rupture site. Photo courtesy of United Mountain Defense

According to The Tennessean, a local resident contradicted TVA's explanation of the spill. Garry Morgan described a silvery sludge coating the shore in the photos he had taken at Bellefonte Landing, near a site where TVA is seeking a permit to build a nuclear power plant. Morgan said he believed "this is the same stuff on the shoreline up there at Kingston." TVA spokesman John Moulton denied that the sludge came from the Widows Creek plant.[5]

Retrieved from "https://www.gem.wiki/w/index.php?title=TVA_Widows_Creek_coal_waste_spill&oldid=241289"
Categories:
This page was last edited on 30 April 2021, at 11:25.
Content is available under Creative Commons Attribution-NonCommercial-ShareAlike unless otherwise noted.
Privacy policy
About Global Energy Monitor
Disclaimers