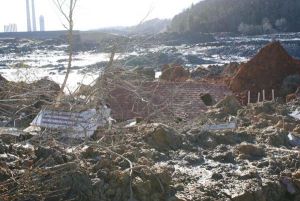 On December 22, 2008, a retention pond wall collapsed at TVA's Kingston plant in Harriman, TN, releasing a combination of water and fly ash that flooded 12 homes, spilled into nearby Watts Bar Lake, contaminated the Emory River, and caused a train wreck. Officials said 4 to 6 feet of material escaped from the pond to cover an estimated 400 acres of adjacent land. A train bringing coal to the plant became stuck when it was unable to stop before reaching the flooded tracks.[2] Hundreds of fish were floating dead downstream from the plant.[3] Water tests showed elevated levels of lead and thallium.[4]

The TVA spill was 100 times larger than the Exxon Valdez spill in Alaska, which released 10.9 billion gallons of crude oil.[6] Cleanup was expected to take weeks and cost tens of millions of dollars.[7]

The 40-acre pond was used to contain ash created by the coal-burning plant.[2] The water and ash that were released in the accident are filled with toxic substances. Each year coal preparation creates waste containing an estimated 13 tons of mercury, 3236 tons of arsenic, 189 tons of beryllium, 251 tons of cadmium, and 2754 tons of nickel, and 1098 tons of selenium.[8]

A report released in late June 2009 identified the main factors contributing to the massive Kingston coal ash spill. TVA hired engineering firm AECOM to analyze the underlying causes of the spill. According to the report, the underlying layer of the coal ash sludge was unstable and went undiscovered for decades by previous TVA stability analyses. The "creep failure" of this layer and liquefaction of the ash triggered the spill. The report also identified other factors including the construction of terraced retaining walls on top of the wet ash, which narrowed the area for storing the ash and in turn increased the pressure exerted by the rising stacks. Engineer Bill Walton said these factors created a "perfect storm" leading to the Kingston disaster. AECOM's report discounted heavy rains and seismic activity as contributing causes.[9][10]

On July 28, 2009, TVA's Inspector General Richard Moore released a report concluding that the agency had improperly directed AECOM's investigation into the causes of the Kingston spill in order to protect itself from lawsuits. Moore criticized the decision to allow TVA's attorneys to hire the consultant and narrow the report in a way that "predetermined the choice that would be made between accountability and litigation strategy." As a result, the report overemphasized an underlying layer of slimy ash as the trigger for the collapse, an explanation Moore said was intended to reduce the legal culpability and liability of TVA management. According to Moore, "it appears TVA management made a conscious decision to present to the public only facts that supported an absence of liability for TVA for the Kingston spill." The report also revealed internal agency memos about warnings that could have prevented the spill, and suggested that other TVA sites may be at risk of similar collapses.[11]

Also in July 2009, consultants McKenna Long and Aldridge of Atlanta released a report commissioned by TVA following the massive Kingston spill. The report cited widespread problems with how the federal utility deals with its coal ash storage, saying that the controls, systems, and corporate culture required for proper management of the coal ash sties at its power plants were not in place. According to the consultants, TVA had no standard operating or maintenance procedures prior to the spill and neglected to provide annual training for its safety inspectors.[12]

TVA vowed to revamp its systems and culture in response to the two studies identifying weaknesses in its coal ash storage operations. The Authority's board called for a plan to correct the deficiencies at all TVA coal ash impoundments, including restructuring the utility's procedures, standards, controls, and accountability.[13] At a July 28 congressional hearing on the Kingston spill, CEO Tom Kilgore testified, "We have to change, and if that means heads have to roll and people have to leave, then so be it."[11]

No bonuses for TVA executives

At a meeting on November 19, 2009, TVA's top executives were told not to expect performance bonuses because of the massive Kingston spill and a drop in electricity sales related to the economic downturn. In addition, about 3,300 other managers and specialists will not receive pay raises in fiscal year 2010. President and CEO Kilgore said, "It was a year overshadowed by Kingston and the economic downturn." Kilgore received over $1 million in bonuses for fiscal 2008, and nine executives who report to him received $1.2 million. TVA directors will extend Kilgore's $300,000 annual retention bonus for another four years, but without bonuses Kilgore's compensation, which includes a base salary of $875,000, is still about 45 percent below the average for top utility executives.[14]

The weekend of January 3rd, 2009, less than two weeks after the catastrophe at Kingston Fossil Plant, a deliberate TVA sludge release occurred on the Ocoee River, which flows into the Hiwasee and then into the Tennessee Rivers. The spill, which contained heavy metals and other toxic substances, caused a fish kill and prompted an investigation by the Tennessee Department of Environment and Conservation. TVA workers had been draining a reservoir and repairing a dam when they released bottom sediment into the Ocoee. As of January 9, TVA had not commented on the situation.[15]

On January 9, 2009, TVA confirmed another coal waste spill on the heels of its Kingston Fossil Plant disaster. The spill, which TVA said originated from a gypsum treatment operation, occurred at its Widows Creek coal-fired power plant in northeast Alabama. About 10,000 gallons of toxic gypsum material were released, some of which spilled into Widows Creek and the nearby Tennessee River.[16] U.S. Sen. Barbara Boxer of California, who is a member of the Senate Environment and Public Works Committee, immediately called for a full review of all TVA's waste disposal sites.[17]

In a test case, some of the coal ash waste that spilled in TVA's Kingston plant disaster is being sent to Georgia and Alabama. TVA is loading it onto rail cars, where the company says it will be safely contained.[18]

In Georgia, the coal waste is being shipped to the Veolia landfill in Taylor Count, about 100 miles south of Atlanta. Local residents have dubbed the dump site "Trash Mountain." Sierra Club representative Mark Woodall said the landfill is poorly suited to coal ash storage, because it is "located in a groundwater recharge area, and it's a danger to our groundwater resources in Georgia."[18] In Alabama, a landfill in Perry County in the west central part of the state is also receiving ash shipments.[19]

The ash will be transported from Tennessee to the out-of-state landfills through May 15, 2009. State and federal officials will evaluate whether the tests are successful, and if so whether to bring in more of the TVA coal waste.[18] Just days after news of the test shipments were announced, EPA decided to take over cleanup of the spill. The agreement between EPA and TVA, which was executed under the Superfund law, has EPA overseeing the cleanup and TVA reimbursing EPA for its oversight costs.[20]

Both the Georgia and Alabama landfills are located in areas with higher rates of poverty and higher percentages of African-American residents than state averages, a situation that has raised concerns about environmental justice. In Taylor County, more than 24 percent of the population lives in poverty, and over 40 percent of the population is African-American; by contrast, the state as a whole has a 14 percent poverty rate and is 30 percent African-American. Perry County in Alabama has more than 32 percent of its residents living in poverty and a 69 percent African-American population, compared with the state as a whole, which has a poverty rate of over 16 percent and a 26 percent African-American population.[19] Perry County District Attorney Michael Jackson criticized the EPA for allowing TVA to dispose of ash at a landfill in a poor community in Alabama, calling the decision "tragic and shortsighted." He vowed to monitor the disposal site to ensure the process complies with environmental regulations.[21]

Reports show that TVA also considered moving the coal ash to two communities in eastern Tennessee, both of which have populations of well over 90 percent white residents and poverty rates of under 21 percent. The two Tennessee sites considered were Athens in McMinn County and Oneida in Scott County. However, the company sought approval from state regulators solely for the sites in Georgia and Alabama. The communities that are receiving the coal waste from TVA were not provided an opportunity for public comment on the decision.[19]

In 2010, Abt Associates issued a study commissioned by the Clean Air Task Force, a nonprofit research and advocacy organization, quantifying the deaths and other health effects attributable to fine particle pollution from coal-fired power plants.[25] Fine particle pollution consists of a complex mixture of soot, heavy metals, sulfur dioxide, and nitrogen oxides. Among these particles, the most dangerous are those less than 2.5 microns in diameter, which are so tiny that they can evade the lung's natural defenses, enter the bloodstream, and be transported to vital organs. Impacts are especially severe among the elderly, children, and those with respiratory disease. The study found that over 13,000 deaths and tens of thousands of cases of chronic bronchitis, acute bronchitis, asthma, congestive heart failure, acute myocardial infarction, dysrhythmia, ischemic heart disease, chronic lung disease, and pneumonia each year are attributable to fine particle pollution from U.S. coal plant emissions. These deaths and illnesses are major examples of coal's external costs, i.e. uncompensated harms inflicted upon the public at large. Low-income and minority populations are disproportionately impacted as well, due to the tendency of companies to avoid locating power plants upwind of affluent communities. To monetize the health impact of fine particle pollution from each coal plant, Abt assigned a value of $7,300,000 to each 2010 mortality, based on a range of government and private studies. Valuations of illnesses ranged from $52 for an asthma episode to $440,000 for a case of chronic bronchitis.[26]

Retrieved from "https://www.gem.wiki/w/index.php?title=Tom_D._Kilgore&oldid=238237"
Categories:
This page was last edited on 30 April 2021, at 11:06.
Content is available under Creative Commons Attribution-NonCommercial-ShareAlike unless otherwise noted.
Privacy policy
About Global Energy Monitor
Disclaimers