Tennessee sits above the Chattanooga Shale, which has been slated as a site for increased drilling and fracking. By 2013 six natural gas drilling companies had looked at mineral rights and property leases in the Chattanooga Shale play. As of February 2013, there are fracking wells in Anderson, Campbell, Fentress, Morgan, Overton, Pickett, Scott, and Union counties in Tennessee. Atlas Energy has bought up 105,000 acres in eastern Tennessee. The company believes that this property could contain up to 500 potential horizontal drilling locations.[1]

Environmental groups speculate that a drilling lease already has also been made in eastern or northern Hamilton County, TN, based on industry blogs.[2]

According to the Tennessee Clean Water Network, a process called nitrogen fracking is occurring in Tennessee, which involves the injecting of nitrogen and 2-4 tankers of water into a gas well in karst geology.[3] A representative from Atlas Energy stated that the Chattanooga Shale is too fragile for high-pressure water fracking treatment, so nitrogen gas will replace some of the water.[1] 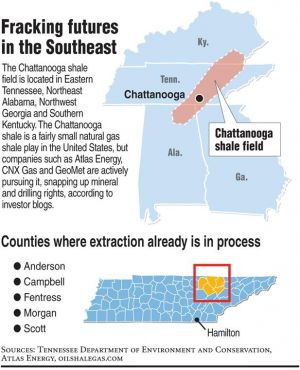 On September 28, 2012, the Tennessee Department of Environment and Conservation (TDEC) and the Tennessee Oil and Gas Board (TOGA) passed regulations to govern the oil and gas industries.

For more than a year prior to the passage, environmental groups met with the TDEC and recommended:

According to critics, the rules passed ignored the recommendations. Most notably, the rules contain a 200,000-gallon threshold: if fewer than 200,000 gallons of water are used to frack a well, the industry is not required to monitor groundwater or notify the public. Yet it is estimated that most fracking jobs in Tennessee would require less water.[4]

In March 2013, the University of Tennessee proposed allowing an outside company to drill on about 8,000 acres of mature woodlands it maintains as an outdoor laboratory in the Cumberland Plateau — all while performing research on the effects of the process on water quality, air quality, and ground impacts. Gov. Bill Haslam is supportive of the university's proposal. Gas driller Consol Energy hired Bryan Kaegi, a fundraiser for Tennessee Republicans, to help shepherd the proposal through the approval process.[5]

The Governor of Tennessee, Bill Haslam, is an oilman and stands to profit from petroleum and gas. The Haslam family of Knoxville, Tennessee founded Pilot Travel Centers in 1958, which merged with Flying J in 2001. In 2012, the Haslam family purchased Western Petroleum and Maxum Petroleum, which are both major suppliers of fuel to the gas drilling and fracking operations in the U.S. The Haslam family will also start installing natural gas fueling pump stations, and plan to have 100 truck stops capable of fueling 18-wheelers with liquefied natural gas.[1]

According to a study by researchers from the University of Florida, North Carolina State University, and Florida State University in August 2015, hydraulic fracturing in, or near, public park lands could prompt tourists to stay away. The study of 225 park users in Pennsylvania, Ohio, West Virginia, Kentucky, and Tennessee found more than a third say they would be unwilling to participate in recreational activities near hydraulic fracturing.Fifty eight percent of the study's participants claim they would support legislation prohibiting fracking near their favorite park.[6]

Wikipedia also has an article on Tennessee and fracking. This article may use content from the Wikipedia article under the terms of the GFDL.

Retrieved from "https://www.gem.wiki/w/index.php?title=Tennessee_and_fracking&oldid=98850"
Categories:
This page was last edited on 25 December 2019, at 23:07.
Content is available under Creative Commons Attribution-NonCommercial-ShareAlike unless otherwise noted.
Privacy policy
About Global Energy Monitor
Disclaimers