This map to the right shows the number of Marcellus Shale permits granted by county in West Virginia from 2006 - 2011. 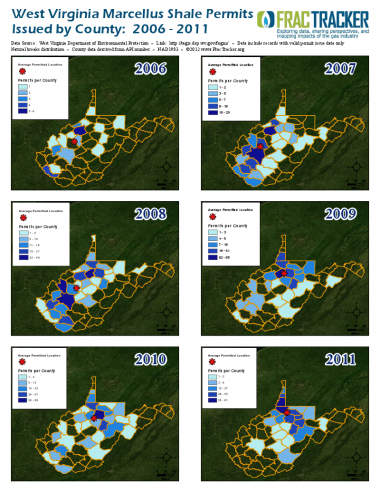 Data released by DrillingInfo in late 2015 reported that permits issued for the Marcellus region was 68 in October, down from 76 in September 2015. Additionally, there were 160 permits issued in June 2015. At the same period in 2010, during the fracking boom in the region, 600 permits were issued a month. The steady decrease in global oil prices was said to be resonsible for the decline in the number of fracking permits.[1]

In February 2011, the NY Times reported that a never-released study by the EPA and a confidential study by the drilling industry concluded that radioactivity in drilling waste cannot be fully diluted in rivers and other waterways, yet federal and state regulators are allowing most sewage treatment plants that accept drilling waste not to test for radioactivity. In West Virginia, a plant in Wheeling discharged gas-drilling wastewater into the Ohio River. Pennsylvania has sent some of its fracking waste to West Virginia for disposal.[2]

The Times also reported that "a 1987 report to Congress by the Environmental Protection Agency that deals with waste from the exploration, development and production of oil, natural gas and geothermal energy ... states that hydraulic fracturing, also called fracking, can cause groundwater contamination. It cites as an example a case in which hydraulic fracturing fluids contaminated a water well in West Virginia. The report also describes the difficulties that sealed court settlements created for investigators." The report concluded that hydraulic fracturing fluids or gel used by Kaiser Exploration and Mining Company contaminated a well roughly 600 feet away on the property of James Parsons in Jackson County, West Virginia. The report contradicts prior statements by the oil and gas industry that there had never been a documented case of contamination, helping the industry avoid federal regulations.[3]

A study released in January 2015 in the Environmental Science & Technology, authored by Avner Vengosh and Gary Dwyer of Duke University, found that high levels of two potentially hazardous contaminants, ammonium and iodide, were being discharged or spilled into streams and rivers from oil and gas operations in Pennsylvania and West Virginia. The authors found that the levels of contamination were as high in fracking wastewater as those coming from conventional oil and gas wells.

"Wastewater from both conventional and unconventional oil and gas operations is exempted from the Clean Water Act, which allows their disposal to the environment. This practice is clearly damaging the environment and increases the health risks of people living in these areas, and thus should be stopped," Vengosh said.[4]

As reported in The Columbus Dispatch, fracking wastewater impoundment lots as big as football fields already dot heavily fracked landscapes in Pennsylvania and West Virginia. The impoundments store millions of gallons of water with fracking chemicals, toxic metals, and radium that come up from shale wells. Companies clean the water of pollutants so it can be recycled to frack new wells.[5]

In Pennsylvania, wastewater must be removed within nine months of competed drilling at a site, according to the DEP. The state has permits for 23 such lagoons.[5]

A West Virginia University study of 15 waste and freshwater lagoons in that state found that eight were built to contain more water than permitted, or had structural problems that threatened leaks.[5]

A new state rule passed quietly in 2013 specifies that landfills can accept unlimited amounts of solid waste from horizontal gas drilling, carving out an exception to a decades-old state law that limited landfills’ intake to only 10,000 or 30,000 tons a month (depending on their classification). The drilling waste is a sludgy mix of dirt, water, sand, and chemicals dredged up in the drilling process.[6]

The volume of water removed from the hydrologic cycle per unit of gas produced in West Virginia wells ranges from 1.6 to 2.2 gallons per thousand cubic feet. Gas producers in West Virginia used an average of 5 million gallons of fresh water for each well, according to publicly available numbers for 2010-2012.[8]

A 2015 Stanford study found that West Virginia, Arkansas, Louisiana, and Pennsylvania had the highest average water use per each hydraulic fracturing job.[9]

From 2010-2014 West Virginia had 122 complaints that drilling contaminated water wells in the state. Four of those cases were strong enough to force drillers to take corrective action.[10]

A January 2015 Environmental Science & Technology study reported that two hazardous chemicals associated with fracking—ammonium and iodide—were being released and spilled into Pennsylvania and West Virginia waterways. The chemicals could have devastating impacts on the environment and wildlife, the study noted. The fracking associated chemicals were "making their way into streams and rivers, both accidentally and through deliberate release from treatment plants that were never designed to handle these contaminants." Both of these chemicals are not currently regulated in oil and gas wastewater.[11]

In December 2014 state officials in West Virginia announced they would permit fracking under the Ohio River. Critics contended that fracking near a freshwater supply like the Ohio River could contaminate drinking water supplies for thousands of people.[13]

In September 2012 environmental groups in West Virginia called for a moratorium on new drilling for natural gas in the state citing environmental concerns. The groups, including Sierra Club and the Ohio Valley Environmental Coalition, called for the ban at a state capitol press conference in Charleston. The groups made a similar plea one year earlier.[14]

On March 1, 2012, the Department of Justice said it was investigating possible environmental violations by Chesapeake Energy at three of its well sites in West Virginia, including possibile criminal violations and other liabilities under the Clean Water Act's prohibition against the filling or damming of wetlands, rivers, and streams without a federal permit. Penalties under the Clean Water Act could be as high as $37,500 per day, per violation. Criminal penalties could range from $2,500 to $25,000 per day, per misdemeanor, and between $5,000 and $50,000 per day for a felony.

Chesapeake's March 1, 2012 filing with the Securities and Exchange Commission stated that the West Virginia Department of Environmental Protection had issued orders for compliance related to alleged violations of the state's Dam Control and Safety Act at four structures constructed for Chesapeake.[16]

Some of the natural gas harvested by hydraulic fracturing operations may be of biological origin, but created by microorganisms inadvertently injected underground into shale by drillers during fracking.[19]

Ohio State University and West Virginia University scientists tested fluids taken from a well operated by Northeast Natural Energy in West Virginia. They measured the genes, enzymes and chemical isotopes in used fracturing fluid drawn from the well for more than a year.

Researchers have long known about the microbes present inside hydraulic fracturing wells and drillers inject commercially available biocides to keep microbes from clogging the equipment. Where the bacteria came from was unknown.

The biocides kill some types of bacteria, thereby enabling other bacteria and archaea to prosper. These survive in water that can be four times saltier than the ocean, and under pressures that are typically hundreds of times higher than on the surface of the earth. These microorganisms adapt by eating chemicals found in the fracking fluid and producing methane.

Northeast Natural Energy drilling manager claimed shale rock is packed so tight he was not sure much could be living there.[20]

The research found that pores inside shale may give microorganisms room to grow and access food.

This is the first detailed genomic analysis of bacteria and archaea microbes living in deep fractured shales.[21]

According to a study by researchers from the University of Florida, North Carolina State University, and Florida State University in August 2015, hydraulic fracturing in, or near, public park lands could prompt tourists to stay away. The study of 225 park users in Pennsylvania, Ohio, West Virginia, Kentucky, and Tennessee found more than a third say they would be unwilling to participate in recreational activities near hydraulic fracturing.Fifty eight percent of the study's participants claim they would support legislation prohibiting fracking near their favorite park.[22]

Retrieved from "https://www.gem.wiki/w/index.php?title=West_Virginia_and_fracking&oldid=238940"
Categories:
This page was last edited on 30 April 2021, at 11:07.
Content is available under Creative Commons Attribution-NonCommercial-ShareAlike unless otherwise noted.
Privacy policy
About Global Energy Monitor
Disclaimers