What About China? (Climate Hope, Chapter 5)

Note: An updated version of this chapter, including footnotes, may be found at http://ClimateHopeBook.com.

Anyone opposing coal on climate grounds quickly runs up against the “China question,” typically phrased something like this: “What good will it do to stop coal plants in the United States? Aren’t they building one every week in China?”

Without a doubt, the scope of the coal boom in China has been breathtaking. According to a frequently cited statistic, the country is building not just one but two midsized coal plants each week, amounting to a yearly increase equivalent to the entire power grid in the United Kingdom. In 2006 annual coal output in China reached 2.5 billion metric tons, more than twice the output of the United States and an astonishing 46 percent of world production.

But there is a limit to how far China’s surging coal use can go. Like a cartoon character who runs off a cliff with his legs still moving, China cannot escape the inconvenient reality that its domestic coal reserves were too small to sustain this level of coal consumption. The evidence for that conclusion was laid bare in an analysis of worldwide coal reserves completed in 2007 by the Energy Watch Group (EWG), a private research group initiated by German parliament member Hans-Josef Fell.

The EWG study has an interesting backstory. It was commissioned in the wake of startling revelations about the quality of data on coal reserves in two major European countries, Germany and the United Kingdom. Even though coal had been mined for centuries in Germany and the United Kingdom, neither country seemed able to judge accurately the quantity of mineable coal under its own feet. Germany for years had estimated that it harbored coal reserves in the tens of billions of tons. But in 2004 the country looked more closely at those reserves and concluded that the amount of economically obtainable hard coal amounted not to 23 billion tons but rather to just 183 million tons, a 99 percent reduction. In the same year, the United Kingdom made a similar head-swirling 99 percent adjustment, revising its published reserves from a figure of 45 billion tons reported in 1980 to just 220 million tons.

The revelation that Germany and the United Kingdom had hugely overestimated their coal reserves led the authors of the EWG study to question whether other countries had done the same. After researching the question, they concluded that the “data quality of coal reserves and resources is poor, both on global and national levels.”

In general, the reason countries tend to overestimate their coal reserves is not that they don’t know the size of the total resource—how much coal is physically located in the ground. Unlike oil and gas, coal deposits are not hard to find. Rather, it has to do with the unrealistic assumptions about the amount of coal that can be economically mined. As a rule, recoverable reserves are far smaller than total resources. Most of the easy coal—the high-quality grades lying in relatively thick seams close to the surface—has already been exploited. What remains are deeper, thinner, lower-quality seams, often in inaccessible locations such as beneath roads, rivers, cities, sensitive environmental zones, or industrial facilities. All these factors, alone or in combination, serve to render the bulk of the coal resource uneconomical to mine.

The EWG study found that Germany and the United Kingdom were not alone in wildly overestimating their reserves of coal. In 2004 the “proved recoverable reserves” reported by Botswana dropped from 3.5 billion tons to 40 million tons, another 99 percent reduction. In the United States, a comprehensive study conducted by the National Resource Council concluded:

[I]t is not possible to confirm the often-quoted suggestion that there is a sufficient supply of coal for the next 250 years. A combination of increased rates of production and more detailed analyses that take into account location, quality, recoverability, and transportation issues may substantially reduce the estimated number of years of supply.

Even for the most actively mined coal-producing regions in the United States, published coal reserve figures were turning out to be in serious error. After conducting a detailed assessment of the Gillette coalfield in Wyoming, the source of 37 percent of total United States production, the U.S. Geological Survey concluded that the portion of the coal that can be mined, processed, and marketed at a profit, based on conditions in 2007, was less than half the estimate arrived at by a 2002 study of the same field.∗

In the case of China, the Energy Watch Group pointed out that the official figure of 115 billion metric tons of recoverable reserves had not been updated since 1992, “in spite of the fact that about 20 percent of their then-stated reserves have been produced since then.” According to the EWG study, the limited size of China’s coal reserves places serious constraints on domestic production in the country:

In other words, although the pace of China’s consumption of its coal is alarming, that pace will be sustained only if China becomes a massive coal importer.

Where might such imports come from? Currently, the runaway leader in coal exports is Australia, with 231 million metric tons of coal moving through the nation’s ports in 2006. Yet even if Australia were to sell its exports exclusively to China, it would amount to less than 10 percent of China’s annual coal appetite. 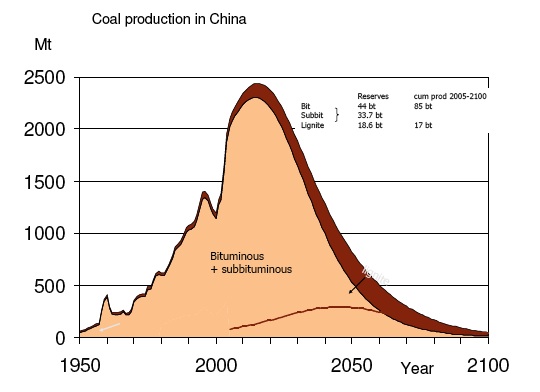 Fortunately, China’s leadership appears to recognize that the country’s coal addiction must be addressed. Driven by a 2005 law that gives incentives such as fixed rate tariffs and carbon credits to renewable-energy companies, expansion of renewable energy has been proceeding at a torrid pace. By 2008 wind power capacity had reached 12,000 megawatts; a year later the country was reported to be building six large wind farms, each with capacity of 10,000 to 20,000 megawatts. Similarly, China was moving quickly to become the world’s leading manufacturer of photovoltaic cells. In terms of overall investment in renewables, the country was second worldwide (after Germany) and was expected to lead the world by 2009.

Two other aspects of China’s coal consumption and energy usage must be kept in mind. First, the per capita contribution of greenhouse gases in China remains far lower than that in the United States—four tons of greenhouse gases per person for China, twenty tons per person for the United States. This difference is due to the country’s lower standard of living and to the fact that its consumption of coal, while relatively high, is partially offset by low rates of oil and natural gas consumption. Compared to China’s economy, the U.S. economy has far more potential to make efficiency improvements without reducing the basic standard of living.

Second, China’s contribution to the greenhouse gases currently in the atmosphere, a reflection of historical consumption, remains lower than that of the United States not only on a per capita basis but on an absolute basis. Despite having less than a quarter of China’s population, the United States continues to bear the biggest responsibility for putting the entire world on course toward serious climate change.

Given the determination of China’s leaders to raise the country’s standard of living above its historical status of impoverishment, it is inconceivable that China’s government would accept limitations on its usage of coal without an equal or greater commitment by the United States and other industrialized countries to do the same. In a very real sense, progress in Chinese policies toward limiting coal usage cannot be expected unless Western anti-coal activists are able to limit their countries’ coal consumption, particularly in the United States.

In sum, those who feel that China’s rush to build coal plants makes the quest for a U.S. coal moratorium irrelevant have it exactly backward. If we want China to clean up its act, we have no choice but to take the lead.

Retrieved from "https://www.gem.wiki/w/index.php?title=What_About_China%3F_(Climate_Hope,_Chapter_5)&oldid=148432"
Category:
This page was last edited on 25 December 2019, at 23:13.
Content is available under Creative Commons Attribution-NonCommercial-ShareAlike unless otherwise noted.
Privacy policy
About Global Energy Monitor
Disclaimers