Aborlan power station is a 15-megawatt (MW) coal-fired power plant proposed to be built in Aborlan, a municipality on Palawan Island, the Philippines, by DMCI Power Corporation. The proposal has been the subject of strong opposition, and a previous proposal to locate the project at Narra was withdrawn in the wake of local protest.

In July 2012, DMCI Power signed a power supply agreement with the Palawan Electric Cooperative, with the intent of building a 15 MW coal plant in Narra, in the province of Palawan.

In May 2015 the plant received the approval of the provincial environmental regulatory agency. The project still needs the Department of Environment and Natural Resources (DENR) to approve the final environmental compliance certificate.[1]

In June 2013, the municipal council of Narra voted for a resolution opposing construction of the plant. Council member Joel Bito-onon, author of the resolution, told the news media: "We will have electricity but that also means our youth will die due to the smoke from the plant. It will also affect the sources of livelihood of Narra residents. What’s more important, life or electricity?"[3]

In August 2013, the Palawan Council for Sustainable Development — the environmental regulatory agency in Palawan — refused to issue a permit for the construction of the plant in Narra, demanding that the site be changed and that the permit application process begin anew.[4] 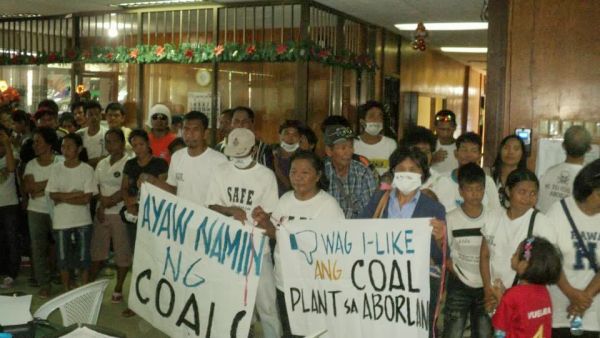 Protest against the proposed Aborlan plant, inside the offices of the Palawan Electric Cooperative, on Nov. 28, 2013.[5]

DMCI subsequently decided to try to build the plant in Aborlan instead; however, the new site is near a fish sanctuary, and locals are concerned that the plant would impact the livelihoods of local fishers. On Sept. 30, about 1,500 local citizens and students marched in protest against building the plant in Aborlan. Lita Sopsop, the Dean of Arts & Sciences at the Western Philippines University in Aborlan, stated that "we oppose the coal plant because of the negative impacts on health and the environment, particularly to locally declared fish sanctuaries in the area. Fishing is the livelihood of people there. The discharge of waste water from the coal plant will cause thermal pollution that is hazardous to the marine ecosystem, especially coral reefs."[2]

Several environmental organizations have also voiced their opposition to the proposed Aborlan site. Alexander Ochs, an official of the Wildlife Institute, said the project will harm both people and the environment.[6] The World Wildlife Fund has claimed that Palawan risks losing its status as a UNESCO Biosphere Reserve if the plant is built. According to Gerthie Mayo-Anda of the Palawan Alliance for Clean Energy, the coal plant would produce energy at a cost of 9.38 Philippine pesos per kWh, compared with P6.59/kWh for a proposed hydropower project.[7]

In October 2013, DMCI Chair Isidro Consunji stated that "protest against the construction comes from NGO[s]... we are not worried, because we are confident that the construction at Aborlan will push through smoothly."[8]

In January 2014, following formal opposition to the proposed plant by Western Philippines University in Aborlan, the governor of Palawan, José Chaves Alvarez, retaliated by stripping the school's scholarship program, and urged students to transfer to Palawan State University.[9] In May 2014, President Aquino announced that his government would be holding a dialogue with residents of Palawan on the plant's future.[10]

In October 2014, facing opposition in Aborlan, PMCI was reportedly considering moving the project back to Narra, but now in the district of San Isidro.[11]

In February 2015, the activist group No to Coal Plant in Palawan reported that "an unimpeachable source" had informed them that, after its legal setbacks, DMCI would no longer be building the plan in Aborlan. They reported, however, that "rumors" had it that PMCI was considering moving the proposal to a different location in Palawan, possibly a district south of Narra.[12]

Retrieved from "https://www.gem.wiki/w/index.php?title=Aborlan_power_station&oldid=256692"
Categories:
This page was last edited on 14 July 2021, at 23:22.
Content is available under Creative Commons Attribution-NonCommercial-ShareAlike unless otherwise noted.
Privacy policy
About Global Energy Monitor
Disclaimers