Gran Gasoducto del Sur Gas Pipeline was a proposed natural gas pipeline.[1] There have been no development updates since its announcement in 2006, and is presumed to be cancelled.

On 9 December 2005, during an annual meeting of Mercosur in Montevideo, the presidents of Venezuela, Argentina, and Brazil signed an accord for the construction of the pipeline.[3] In June 2007 Petrobras president Jose Sergio Gabrielli said that the pipeline would not become operational for 20 to 30 years. In July 2007 Venezuelan President Hugo Chávez said that interest in building the pipeline had cooled.[4]

There have been no development updates since its announcement in 2006.

The exact route of the pipeline was never defined. It was only disclosed that the first 2,950 km (1,930 mi) section was to run from Puerto Ordaz, Venezuela, through Amazonas and Amapá states in Brazil to Marabá, Pará state, Brazil. In Manaus, Amazonas state, the pipeline was to be connected to the Urucu–Manaus gas pipeline. From Marabá, plans called for a 1,387 km (862 mi) branch line to Fortaleza, Ceará state, where a connection could be made to the existing system running south along the coast to Bahia state to join the Gasene gas pipeline.[1]

The second 1,977 km (1,228 mi) section from Marabá was to continue southward to São Paulo state. From there, the pipeline was to be routed by the 1,875 km (1,165 mi) section to the border between Rio Grande do Sul state and Uruguay and then cross Uruguay to Buenos Aires, Argentina.[1][3]

The Puerto Ordaz-Marabá section was planned to have a 1700 mm (66 in) diameter and to have 13 compressor stations of 25,000 hp each. The diameter of the Marabá-Fortaleza branch as planned would gradually decrease from 910 mm (36 in) to 810 mm (32 in) and the branch project involved the installation of five 15,000 hp compression stations. The gas amount received in Fortaleza was planned to be 12.75 billion cubic meters (bcm) of natural gas per annum. The Marabá-São Paulo section was to be 1370 mm (54 in) in diameter and to include eight 20,000 hp compression stations. The gas delivered to São Paulo was planned to be 15 bcm per annum. The Brazil-Argentina section with capacity of 18 bcm per annum was to include eight 15,000 hp compressor stations.[1] 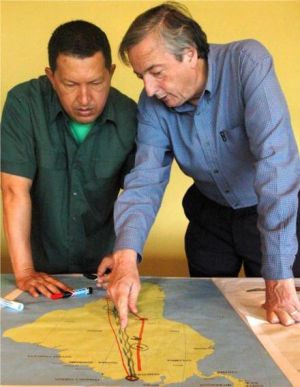 As shown in the photo to the right, in which former Venezualan President Hugo Chávez and former Argentine President Néstor Kirchner stand above a map with a straight line drawn through the Venezuelan and Brazilian rainforest and the Bolivian, Paraguayan and Argentinean plains, the pipeline would have gone through some of the most protected areas of the world. According to a April 2016 article in Arch Daily, "leaders were apparently indifferent to the environmental and indigenous concerns that would be raised by the implementation of such a project. The inherently modernist nature of such a gesture foregrounds what has been a key political dispute within the left in Latin America: on the one hand, a common political project of national and regional sovereignty based on resource nationalization and, on the other, massive social movements of landless peasants, indigenous populations and environmental activists, fighting back against the expansion of these very extractive economies."[3]

The project was to be financed by Petróleos de Venezuela S.A., CAF - Development Bank of Latin America, and Caixa Econômica Federal with possible participation of other public institutions and private investors.[1]

Retrieved from "https://www.gem.wiki/w/index.php?title=Gran_Gasoducto_del_Sur_Gas_Pipeline&oldid=249202"
Categories:
This page was last edited on 9 June 2021, at 13:43.
Content is available under Creative Commons Attribution-NonCommercial-ShareAlike unless otherwise noted.
Privacy policy
About Global Energy Monitor
Disclaimers