The Indramayu power station is a three-unit, 990-megawatt (MW) coal-fired power station in Indonesia's West Java Province, owned by PLN.[1] The three units of the Indramayu power station were built under Fast Track Program (FTP) Phase I.[2][3] The three units were financed by US$129 million in equity, provided by PLN, and US$730 million in loans provided by a consortium of banks including Societe Generale, Industrial and Commercial Bank of China, China Construction Bank, BNP Paribas, Bank of China, China Development Bank, China CITIC Bank, Bank Negara Indonesia, Bank Mandiri, and Bank Rakyat Indonesia.[4]

In December 2014, Indramayu Regency officials alleged that a former Regency government official, Irianto M.S. Syafiuddin, had embezzled 4.1 billion Rupiah, or about $300,000, in the land acquisition process for the Indramayu plant in 2004.[5]

PLN is planning to build two additional 1,000-MW coal-fired units at this plant. Environmental permits have been difficult to obtain, and have caused significant delays, with the company still waiting on these permits as of December 2014. The company was hoping to begin construction in 2015, but was uncertain whether it would be able to.[6][7]

The 2016-2025 and the 2017-2026 power supply plans for PT PLN no longer list Indaramayu Unit 5. It appears the project has been abandoned.[9] However, a May 2017 article on potential JCIC funding describes the project as 2 x 1000 MW, suggesting that Unit 5 is still under development. In the report, the Central Business Division Director of Central Java PLN, Nasri Sebayang, said that a 2 x 1000 MW expansion is now in the preparation stage of the tender documents for JICA funding, with construction beginnning in 2018 and ending in 2021. The plant would require US$4 billion.[10]

On December 6, 2017, the environmental permit for Units 4 & 5 was revoked by Bandung Administrative Court Judges. This ruling was in response to a lawsuit filed by Mekarsari and surrounding villagers who are members of the Indramayu Smoke Free Network (JATAYU). The residents argued the environmental permit for PLN’s proposed expansion had been improperly issued and there had been no public consultation with the affected communities.[11] The decision will likely be appealed and ruled on by a higher court.

In March 2013, Japan International Cooperation Agency (JICA) signed a US$88 million overseas development aid loan to support funding for construction of unit 4.[16][17] In 2017, PLN officials stated that JICA had agreed to provide debt financing for the US$4 billion needed for construction costs.[18][10] Given that, as of October 2021, construction had not begun on Indramayu Unit 4, it is unclear whether this financing agreement has been finalized or how much funding has been disbursed. Activist groups from across the globe have called on JICA to pull its funding commitment from the Indramayu expansion.[19][20]

The expansion has been opposed by local residents, who say the existing plant has already resulted in negative impacts to their livelihoods, and that the expansion would displace needed farming land.[21] Executive Director of WALHI West Java Dadan Ramdan described the December 2017 revocation of the environmental permit for PLTU Indramayu 2 as a victory for villagers.[11]

In September 2018, two environmentalists who had protested the Indramayu expansion were arrested and charged with raising an inverted national flag, which is a crime under Article 24 of Law No. 24/2009.[22] 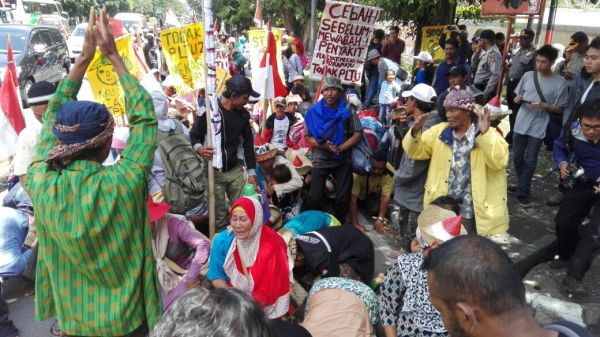 The construction of PLTU Indramayu 2 significantly decreased the productivity of nearby agricultural land, covering a total area of ​​275.4 hectares. As a result, 790 farm laborers lost their jobs which are their cultural roots.[23]

Retrieved from "https://www.gem.wiki/w/index.php?title=Indramayu_power_station&oldid=273990"
Categories:
This page was last edited on 2 November 2021, at 09:50.
Content is available under Creative Commons Attribution-NonCommercial-ShareAlike unless otherwise noted.
Privacy policy
About Global Energy Monitor
Disclaimers