The aerial photograph below shows the existing plant to the east and the new units to the west, in Bani Barangay, Masinloc Municipality, Zambales Province.

In 1990, the Philippine government's National Power Corporation (NPC) undertook the Masinloc Thermal Power Project with financing from the Asian Development Bank (ADB) and the Export-Import Bank of Japan. Subsequent local opposition and protests created problems for the plant's developers with land acquisition, resettlement, and obtaining an environmental compliance certificate, thus significantly delaying the project's construction. Eventually, President Fidel Ramos used emergency powers to push the plant's construction through. 198 families were displaced to make way for the plant.[1] In 2011, Masinloc Vice Mayor Jeffrey Bautista recalled that Ramos “had to send troops to control the crowd here.”[2]

In 1992, Father Shay Cullen reported on this opposition, stating that "the people of Masinloc and Zambales don't want this power, the protest against it, they object strenuously that their health and that of their children is to be sacrificed and their land, sea and skies polluted and poisoned. ... They are starting an international letter campaign to Mr. Kimi Masa Tarumitzu and the donor governments of the ADB to get the project stopped. Bishop Deogracias and the entire clergy of Zambales province have taken their stand with the people and have denounced the project as being environmentally unsound."[3]

In Dec. 1993, more than 500 people traveled six hours from Masinloc to participate in a protest at the Manila office of the Export-Import Bank of Japan, calling on the bank to retract its financing for the project. The protest was organized by Bani United Community for Progress (BUCUPI), Sama-sama Laban sa Planta, and the Social Action Committee of Masinloc (a Catholic church group). Mila Umayam, a protest leader, called the financing by the Japanese bank "the second invasion of the Japanese regime." Kazio Sunaga, first secretary of the Japanese Embassy in Manila, stated that they were "urging the Philippine government to have intensive talks with local people" in Masinloc in order to resolve the dispute.[4][5]

In June 1994, the NPC used a "Writ of Possession" to take possession of the land of eight landowners who had refused to sell in order to make way for the plant; the Iba clergy said that the NPC pressured landowners, offered varying rates for their land, and offered land at a relocation site that did not match the value of the land that the villagers had to give up.[6] The project broke ground in July 1994, in a ceremony presided over by Pres. Ramos, while more than 1,000 people, led by Bishop Deogracias Iniguez and Father James Laquindanum, protested outside. Protesters said that they would continue with protests and legal action to prevent the construction from proceeding.[6] 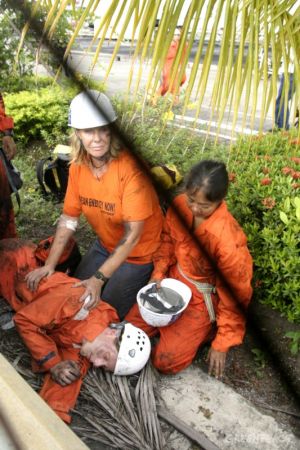 The Asian Development Bank issued its initial loan for the project in Dec. 1994; a 1995 ADB study concluded that "no significant potential health risk will arise from the atmospheric emissions from the operation of the Project because measures have been instituted to ensure that the plant's emissions and effluents will be will within [the standards of the Philippine government's Department of Environment and Natural Resources]."[7] The plant went online in 1998.

In Nov. 2005, during a nonviolent Greenpeace protest that was organized after discussions on expanding the plant began, a German Greenpeace activist, Jens Loewe, was hit by a crowbar in the face and beaten by armed guards at the Masinloc plant. Three other activists were also injured after being hit by stones thrown by the guards; the guards allegedly also fired warning shots into the air.[9][1]

In 2011 AES Corp. announced plans for a $1-billion expansion to double the existing capacity of the 600 MW Masinloc power station. The first phase of the project would involve the construction of an additional 300 MW coal plant, expected to be completed by 2015. The second phase of the project would construct the remaining 300 MW to go online by 2018, if there was demand.[10]

City officials opposed the expansion. In 2011, Mayor Desiree Edora described the negative effects of the existing plant, stating that local farmers "say their crops have been affected. The fruits of trees, especially mango trees, for which we are well-known for, have been stunted. They do not grow as big as before. Fishermen report less catch." Vice Mayor Bautista stated that, when the plant was constructed, “we knew that it would be bad for the environment as well as ourselves.”[2]

In June 2012, AES stated that it had an “environmental permit in place."[11] As of September 2014, AES was negotiating the engineering, procurement, & construction (EPC) contract with potential contractors; the company hopes to break ground in 2015, and complete the project in 2018. The project's cost has been upped to $1.2 billion.[12][13]

In June 2014, AES sold a 45% stake in its Philippine operations (including the Masinloc plant) to the Thai company Electricity Generating Public Company (EGCO Group).[14]

In December 2015, the project reached financial closure after it secured US$525 million in loans from the Development Bank of the Philippines, Philippine National Bank, Rizal Commercial Banking Corporation, and Security Bank. US$175 million in equity is being provided by AES Corporation.[23]

In January 2021, Masinloc Power Partners announced plans to construct an additional 315 MW supercritical coal-fired generator at the Masinloc power station. The project is expected to cost approximately US$890 million.[24] The company expects construction to begin in the second half of 2021, with commercial operation targeted for 2024.[25]

In July 2017, AES announced that it would sell its 51% ownership stake in Masinloc.[26] Potential bidders for the facility as of October 2017 were Meralco, San Miguel Corporation, and Aboitiz Power Corporation.[27]

In March 2018 members of the environmental group Oyon Bay Protector (OBP) claimed that construction on the Masinloc expansion had destroyed large areas of coral and marine life in Masinloc Bay.[29] “The unauthorized massive reclamation activities of MCPP in Masinloc town must be stopped immediately since they violated several provisions of the national integrated protected areas system act of 1992,” said OBP chairman Joey Marabe.[29]

Retrieved from "https://www.gem.wiki/w/index.php?title=Masinloc_power_station&oldid=246781"
Categories:
This page was last edited on 26 May 2021, at 19:24.
Content is available under Creative Commons Attribution-NonCommercial-ShareAlike unless otherwise noted.
Privacy policy
About Global Energy Monitor
Disclaimers