Nagan Raya power station (also known as the Meulaboh power station) is a 220-megawatt (MW) coal-fired station in Aceh, Indonesia. An additional 2 x 200 MW is planned as an IPP project.

The Meubolah power station is a two-unit, 220-MW coal-fired power plant in Aceh Province, Indonesia, owned by PT Perusahaan Listrik Negara (PT PLN). This project was originally referred to as the Meulaboh project.

Description of Expansion (Units 3 and 4)

Although the new units are referred to as Units 3 and 4, they will not necessarily be located at or near Units 1 and 2. As of October 2016, it remained unclear whether Units 3 and 4 would be located in Meulaboh, West Aceh, or Nagan Raya.[11]

In May 2017, PT PLN signed a power purchase agreement (PPA) with China Datang Overseas Investment, PT Pembangunan Perumahan, and PT Sumberdaya Sewatama for the 2 x 200 MW expansion. The consortium will set up a special purpose vehicle (SPV) to develop the plant through a build, own, operate, and transfer (BOOT) scheme without guarantee. The plant's commercial operation data (COD) will be mid-2020.[12]

In March 2020, the project's sponsor declared force majeure and stated that development would be delayed as a result of the COVID-19 pandemic.[13] In March 2020 the PLN Manager in charge of developing Units 3-4 estimated they would be completed in 2024.[14] In February 2021, a PLN representative estimated that Units 3-4 would be operational by 2023.[15]

In May 2019, residents staged a protest and put up a fence that halted work on the Nagan Raya 3 and Nagan Raya 4 site.[16] In November 2019 a group of mothers from the village of Suak Puntong created a roadblock in protest of the dust and coal dust from the plant polluting their neighborhoods.[17] 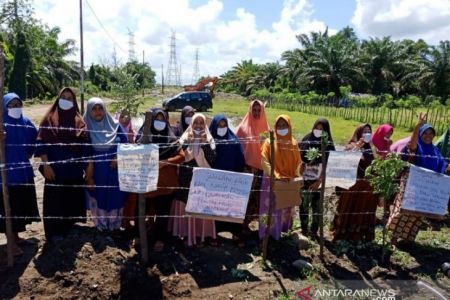 In May 2019, it was reported that chemicals discharged from the plant were killing fish in waterways in Gelanggang Merak Hamlet and Suak Puntong Village.[18]

On March 23, 2020, it was reported that residents of Gelanggang Merak Hamlet had asked the owners of the Nagan Raya-3 and Nagan Raya-4 plant to stop transporting materials to these plants' construction site as dust from trucks poses a risks to people who have contracted COVID-19.[19]

Two barges carrying coal for Nagan Raya power station Units 1-2 have ran aground on the beaches around the power station, the first in July 2019, and the second in July 2020. Both barges were fully loaded with coal when they were beached. The second barge was still abandoned on the beach in March 2021, 7 months after the inital incident. One observer estimated that 3,000 metric tons of coal had been spilled into the surrounding area.[20]

In October 2021 it was reported that the Corruption Eradication Commission (KPK) was conducting an investigation into improprieties around the permitting of Units 3 and 4.[21]

In June 2021, a truck driver delivering sand to the Naga Raya Unit 3-4 construction site was crushed between two queuing trucks when one truck unexpectedly rolled backward. He was taken to a hospital, but was declared dead on arrival. A second worker suffered from a broken hand from the same incident.[24] Police again opened an investigation into the worker's death.[25]

Retrieved from "https://www.gem.wiki/w/index.php?title=Nagan_Raya_power_station&oldid=273978"
Categories:
This page was last edited on 2 November 2021, at 08:53.
Content is available under Creative Commons Attribution-NonCommercial-ShareAlike unless otherwise noted.
Privacy policy
About Global Energy Monitor
Disclaimers