Today's resistance to coal has precedents in earlier fights to oppose strip mines and high voltage transmission lines. In 1965 Ollie Combs, a 61-year-old widow, sat down in front of a bulldozer along with her two sons to stop their Honey Gap, Kentucky, home from being mined by the Caperton Coal Company. A newspaper photograph showing Combs eating Thanksgiving dinner behind bars produced a public outcry and led to the founding of Appalachian Group to Save the Land and People, which by 1972 was staging organized non-violent civil disobedience actions, including a January 1972 strip mine occupation by 20 women in Knott County, Kentucky, that received national media attention.[1]

Not all resistance efforts were nonviolent. In Knott County, a diesel-powered shovel owned by the Kentucky River Coal company was dynamited in April 1967, and another large shovel was blown up two months later at a Kentucky Oak operation nearby. In Perry County, Kentucky, saboteurs dynamited a grader belonging to the Tarr Heel Coal Company and snipers exchanged gunfire with workers. Later that summer, carbon nitrate was used to destroy two trucks, an auger, and a bulldozer at the same location. Local strip mine opponents in Knott County also formed a “conservation group” called the Mountaintop Gun Club, which assisted landowners in setting up shooting ranges to dissuade miners from encroaching on their property.[2]

In Pope County, Minnesota, a years-long confrontation over a large powerline extending from the North Dakota coal fields to Minnesota’s urban centers erupted into a full-scale rebellion during 1978 between hundreds of farmers armed with tractors, manure spreaders, and ammonia sprayers and two hundred state troopers attempting to protect surveying operations for the line. After the powerline was built, “bolt weevils” toppled numerous towers and bullets from high-powered rifles destroyed insulators and split transmission cables. Despite intensive deployment of utility security personnel and police resources, including high-speed helicopters, no arrests were ever made.[3]

During the current wave of opposition to coal, protesters have steered firmly toward nonviolent tactics.While Greenpeace has used direct action tactics since the 1970's, other climate justice, Appalachian environmental justice and anti-mountaintop removal movements (such as Rising Tide, Rainforest Action Network, Climate Ground Zero, Earth First! Mountain Justice Summer, and indigenous groups) have more recently adopted direct action tactics in order to escalate pressure on coal mining and power companies, financial institutions which invest in coal companies, and government officials that support the coal industry. Anti-coal activists have staged scores of direct actions in the past few years, many of which have been highly successful at directing public attention toward the growing anti-coal movement.[4][5]

For details, images, and videos of specific direct actions, see the following:

The term "direct action" refers to political activities which attempt to bring about changes in the world in a direct and unmediated way. This concept of mediation is key to the distinction, drawn by many proponents of direct action, between direct and symbolic action: in a symbolic action, participants appeal to government officials or other power-holders to make changes on their behalf, while, in a direct action, participants directly make the changes that they want to see in the world.[6]

Several categories of political and economic activities can thus be understood as direct actions:

The term "direct action" was first used by anarchist and radical socialist labor activists in the late 19th and early 20th centuries. These activists understood direct action as involving all five of the above categories of tactics, but they focused especially on strikes, sabotage, and violent resistance against owners of the means of production.[6][7] 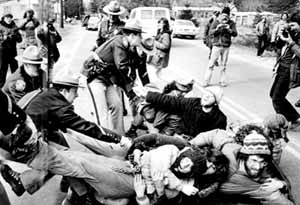 Activists attempt to block the delivery of a reactor to the Seabrook nuclear plant in 1979.

In the 1970's and 80's, the term "direct action" was adopted by European and American anti-nuclear activists. In this context, the term almost always referred to the second category of direct action: blockades and occupations of nuclear power plants, of roads leading into those plants, and of military bases where nuclear weapons were being stored. Also, anti-nuclear activists - who were often influenced by Gandhian principles of nonviolence[8] - usually referred to such blockades as nonviolent direct actions (thus linking themselves with the nonviolent civil rights and anti-war movements of the 1960's, and distancing themselves from the more violent history of direct action as a tactic of radical labor activists in the early 20th century). Prominent examples of anti-nuclear nonviolent direct actions include the attempted blockade of a nuclear test in French Polynesia by the ship Greenpeace III in 1972,[9] the blockades of the Seabrook nuclear power plant in New Hampshire between 1977 and 1979,[10] and the occupations of the Diablo Canyon nuclear power plant between 1977 and 1981.[11] 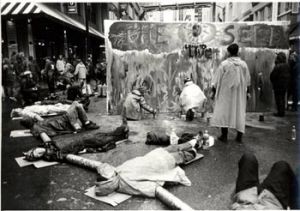 Activists use lockboxes to blockade a road at the anti-WTO protests in Seattle on Nov. 30, 1999. 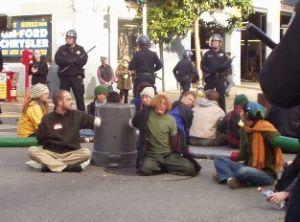 Activists use lockboxes and a barrel to blockade a road in the San Francisco financial district on March 20, 2003.

In the 1980's and 90's, nonviolent direct action tactics (again, focusing primarily on blockades and occupations) have spread from the anti-nuclear movement to anti-globalization, anti-war, and radical environmental activist organizations and movements more generally.[12] These activists have developed a variety of tactics - including hard lockdowns, tripods, and "sleeping dragons" - to occupy spaces as long as possible, with the goal of disrupting the activities of target institutions. Large-scale examples of contemporary nonviolent direct actions include the November 1999 blockade of the Seattle summit of the World Trade Organization,[13][14] the March 2003 blockade of the San Francisco financial district by anti-war activists,[15] and actions against the June 2007 G8 summit in Heiligendamm, Germany.[16]


Al Gore speaks out in favor of direct action

On September 24, 2008, former U.S. Vice President Al Gore told the Clinton Global Initiative conference in New York city, "If you're a young person looking at the future of this planet and looking at what is being done right now, and not done, I believe we have reached the stage where it is time for civil disobedience to prevent the construction of new coal plants that do not have carbon capture and sequestration."[17]

Retrieved from "https://www.gem.wiki/w/index.php?title=Nonviolent_direct_actions_against_coal&oldid=235312"
Categories:
This page was last edited on 30 April 2021, at 11:02.
Content is available under Creative Commons Attribution-NonCommercial-ShareAlike unless otherwise noted.
Privacy policy
About Global Energy Monitor
Disclaimers