Information on earlier actions as well as on the anti-coal movement in particular states or countries can be found at the following articles:

Nonviolent direct action - a term which, in contemporary social movements, is usually used to refer to acts of civil disobedience, in which activists blockade or occupy public or private space - has become an increasingly common tactic of anti-coal climate activists since 2005. While Greenpeace has used direct action tactics since the 1970's, since 2004 other climate justice, Appalachian environmental justice and anti-mountaintop removal movements (such as Rising Tide, Rainforest Action Network, Earth First!, Mountain Justice Summer, and indigenous groups) have used direct action tactics in order to escalate pressure on coal mining and power companies, financial institutions which invest in coal companies, and government officials that support the coal industry. Anti-coal activists have staged dozens of such direct actions in the past few years, many of which have been highly successful at directing public attention toward the growing anti-coal movement.[1][2]

The term "direct action" refers to political activities which attempt to bring about changes in the world in a direct and unmediated way. This concept of mediation is key to the distinction, drawn by many proponents of direct action, between direct and symbolic action: in a symbolic action, participants appeal to government officials or other power-holders to make changes on their behalf, while, in a direct action, participants directly make the changes that they want to see in the world.[3]

Several categories of political and economic activities can thus be understood as direct actions: 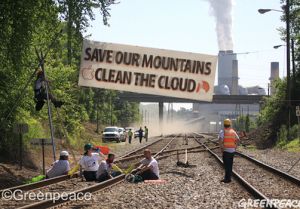 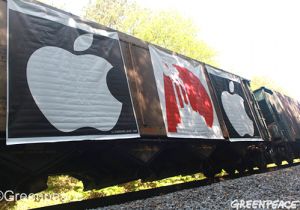 On May 3, activists protested mountaintop removal mining by locking themselves to train tracks, preventing coal train loads from entering Duke Energy's Marshall Steam Station in North Carolina. The activists, affiliated with RAMPS, Katuah Earth First!, Greenpeace and Mountain Keepers said they would not leave until Duke agreed to end its use of mountaintop removal coal operations. The power burned in Marshall is used to power Apple's iCloud data center.[4] Four activists handcuffed themselves to tracks, while others draped banners with Apple's logo on freight cars.[5]

On May 5, 012 thirteen protesters, along with one of Canada's leading energy-environment economists Mark Jaccard, a professor of sustainable energy at Simon Fraser University and a Nobel Peace Prize winner, were arrested after they set up a blockade on train tracks in White Rock, B.C., aimed at halting U.S. coal trains from reaching local ports.[6]

It was reported on July 28, 2012 that 20 protesters associated with the Radical Action for Mountain People's Survival (RAMPS) Campaign, managed to shut down Patriot Coal's Hobet Mine in the US state of West Virginia for approximately three hours on Saturday, July 28, 2012. Most of the activists were charged with trespassing. Bail was set at $25,000 each.[8]

The RAMPS Campaign is calling for an end to strip mining in the Appalachian region because of its health and environmental consequences.[9]

On August 13, 2012 protesters opposed to coal development in Montana occupied the state Capitol in Helena, the first day of a week-long protest aimed at elected officials to push them to block future development leases.

The protesters, led by a Missoula based group called the Blue Skies Campaign, billed the "Coal Export Action sit-in" as a non-violent protest. The group hopes to convince the Montana Land Board to reject development of coal in eastern Montana's Otter Creek, or at a minimum delay action on the issue while more studies are undertaken. Seven activists were initially arrested but others vowed to continue their actions. However, by the end of the first week of protest a total of 23 activists were arrested.[10][11][12]

Retrieved from "https://www.gem.wiki/w/index.php?title=Nonviolent_direct_actions_against_coal:_2012&oldid=235318"
Categories:
This page was last edited on 30 April 2021, at 11:02.
Content is available under Creative Commons Attribution-NonCommercial-ShareAlike unless otherwise noted.
Privacy policy
About Global Energy Monitor
Disclaimers