Opposition to coal in New Zealand

July 5, 2010: largest protest in country's history against coal mine

Organized by Greenpeace, a protest against an open-pit coal mine in an area described as "prime conservation land". In an effort to stop the mine, Lucy Lawless, known for her role as Xena the Warrior Princess, teamed up with Robyn Malcolm, a popular television and theater actress in New Zealand, to call the decision to open the mine “19th century thinking in a carbon-constrained world”. The duo, along with Greenpace, created a video of tourist reactions to the proposal in one of New Zealand’s parks, mocking prime minister John Key who called coal “sexy”.

Greenpeace estimated that on July 5, 2010, 50,000 people marched in opposition in the city of Auckland. Robyn Malcolm on the day of the protest said, "For nearly 50,000 Kiwis to turn out and be prepared to speak with one voice, must tell the Government something. And that something is this: we, the people of New Zealand get it; we get the argument, we see what you’re up to and we won’t have it. Our land will always be more important to our identity than some extra dollars in the pockets of mining companies.”[1]

Citizen power in New Zealand forced the government to scrap a controversial mining resolution in July 2010 that would have allowed coal prospecting in pristine areas of the country, most notably on Great Barrier Island, the Coromandel Peninsula and in Paparoa National Park, including an open pit mine that would have been the largest in the country. Thousands of people protested the plan that was seen as widely unpopular throughout New Zealand. 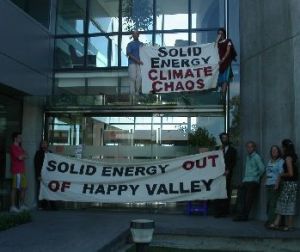 Three Save Happy Valley Coalition activists blockade coal train tracks in New Zealand - two are attached to the tracks, while the third is hanging from a tree 100 feet in the air, attached to a support rope that is tied to the tracks.

On August 13, 2005, a group of 25 Save Happy Valley Coalition activists and allies blockaded train tracks leading from Solid Energy's coal mines to the port of Lyttelton, New Zealand, in protest of Solid Energy's plans to build a coal mine in Happy Valley. Two people locked themselves to the tracks, while a third suspended himself from a tree 100 feet in the air, attached to a support rope that was tied to the tracks. Four Solid Energy trains stood on the tracks for five hours, while police cleared the blockade; the company claimed in court that the blockade cost them $150,000. The three blockaders were arrested.[4][5]

Retrieved from "https://www.gem.wiki/w/index.php?title=Opposition_to_coal_in_New_Zealand&oldid=240923"
Categories:
This page was last edited on 30 April 2021, at 11:24.
Content is available under Creative Commons Attribution-NonCommercial-ShareAlike unless otherwise noted.
Privacy policy
About Global Energy Monitor
Disclaimers