Opposition to coal in China

On December 20, 2011, tens of thousands of residents in "a key economic area" of China’s southern Guandong Province gathered in the streets, occupying a highway to demonstrate against an existing coal plant and the development of a new coal plant near Shantou city -- Huaneng Shantou Haimen Power Plant Phase II Unit 4. The residents say existing coal plants in the area are already fouling local air and water, making people sick and damaging their livelihoods. Police moved in with tear gas, according to CNN, who also said the protest was initially censored on Twitter by the Chinese government.

According to Climate Progress: "Each year, protests spring up to counter the construction of dirty coal plants. But this appears to be the biggest yet. Officials now say they will abandon plans to build a new coal plant in the area. Two people were reportedly killed in clashes with police, but the government is denying those reports."[1] 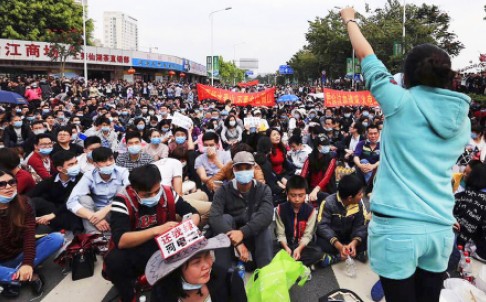 Heyuan power station is a 1,200-megawatt (MW) coal-fired power station in Guangdong Province, China. An additional 2,000 MW has been proposed. In response to the proposed expansion, an estimated 10,000 people demonstrated on April 12, 2015 against the project, saying the air and water in the region was already heavily polluted.[2][3]

On March 11, 2012, an estimated ten thousand residents of the southern Chinese island province of Hainan took to the streets of Ledong county in protest of plans to build a 1.9 billion yuan (U.S. $301 million) Yinggehai coal-fired power plant in their hometown. Protesters arrived at the venue for the March 12 opening ceremony kick-starting construction work on the plant, and closed their businesses as a strike against the plant. Local sources said some protesters also attacked local government buildings, clashing with riot police who were deployed to restore order. Online news reports related to the protest appeared on microblogs and chatrooms, but were quickly deleted. A Ledong county resident surnamed Mao said the villagers were afraid that the sea pollution caused by a coal-fired power plant would wipe out their fishing businesses and farmland.

Plans for the plant began in 2007, but did not receive approval from the National Resources Bureau in Beijing until November 2011. The plans were opposed by more than 8,000 local residents during a consultation exercise carried out by China Power's Hainan division in January 2012. An official at the Yinggehai township government offices said the government was trying to persuade the villagers to accept the project, and that it was "not likely" that the project would be stalled by the protests: "This is a project which has been ordered by the government at national level, so we will implement it regardless of how much resistance we meet."

A Yinggehai resident surnamed Hu told Radio Free Asia that the government had failed to take local people into account when making its plans: "They think they can implement any plans they like, but there is no benefit to us that will come from this at all.... This project is just 900 meters (2,952 feet) from our homes."[4]

In response, authorities moved the project to another Hainan town, but it also drew strong opposition there and officials returned to their original plan. When construction resumed on the Yinggehai plant in October 2012, over a thousand people launched several days of protests. Dozens were injured and many detained by police, who put the town under strict surveillance, residents said. A Hong Kong-based rights group, the Information Center for Human Rights and Democracy, said 50 people had been arrested and almost 100 injured in the protests over the now 3.9 billion renminbi ($620 million) plant. Police and local officials have declined to comment.[5]

In September 2014, according to the the US-based Boxun news portal and the Hong Kong-based Information Center for Human Rights and Democracy, thousands of people conducted a sit-in and hunger strike to protest the expansion of the Huaneng Yueyang power station. About 2,000 people protested at the government office of Pingjiang County in Yueyang City, holding banners that read: "Rather starved than poisoned to death." In the evening, the crowd swelled to about 20,000. The following day, hundreds rallied near the county government building. High school students joined the hunger strike, boycotting classes. Boxun quoted protesters who said that more than 10,000 people had joined the rally. The Center said that thousands of paramilitary police had been deployed in the county. At issue was the concentration of pollution acid rain and fog due to the Pingjiang's valley layout and the large size of the project, with four 1,000 MW units already operating.[6]

In recent years, Inner Mongolia has become China's leading producer of coal and rare earth elements, squeezing out the indigenous Mongolian community from their homelands. Many locals are from herding families who have been moved into cities as the wide-open pastures are fenced off. The Chinese government says such measures are necessary to promote "development" and protect the fragile grasslands, much of which have turned to desert in recent years. Locals say herders' rights have been violated and the fencing and mining have created bigger environmental problems, including water and land pollution, noise, traffic and coal dust storms that blow across much of north-east Asia.[7]

Chinese authorities also face unrest in Tibet and Xinjiang between herders and mining settlers. Inner Mongolia is usually considered less of a security threat because its overseas supporters are less vocal in calling for independence, it does not have a charismatic leader such as the Dalai Lama and its indigenous community has already been numerically overwhelmed by an influx of Han migrants who comprise 79% of the population. But there is a heavy security presence, and police are showing willingness to quash dissent.[7]

Tensions increased after May 10, 2011, when a Han Chinese coal-truck driver ran over a 35-year-old Mongolian herder, known as Mergen, as Mergen tried to stop a convoy driving across fenced prairies in Xiwu. Allegations that the killing was deliberate inflamed passions in the indigenous Mongolian community, and protests erupted in at least three places.[7]

Five days later, a forklift operator named Yan Wenlong was killed at a coal mine near Xilinhot after he and other locals clashed with company employees in a protest over pollution from the mine.[8]

A peaceful gathering by Mongolian herders and students on May 23 at the banner capital in protest over the killing of Mergen reportedly led to violence and arrests as local authorities ended the demonstration by sending in police and "plain-clothes thugs." Two days later, about two thousand Mongolian herders, high school students and others mounted another demonstration and rally in Shilin Hot city.[9]

Video clips posted online by overseas supporters show herders being arrested after the face-off with military police in Ujumchin the previous week. According to overseas groups, crowds also took to the streets in Huveet Shar on May 26 and Shuluun Huh on May 27 with banners declaring: "Defend the rights of Mongols" and "Defend the homeland". The biggest protest was in Xilinhot, where 1,000 students in yellow and blue uniforms marched through the broad streets to the government headquarters on May 26.

Locals said 35-year-old Mergen was leading about 40 herders who tried to block a convoy of coal trucks from the Tongcheng No 2 colliery. The drivers had reportedly run down fences and intruded on nomads' land to avoid a bumpy road. After a protracted stand-off, the drivers are said to have crashed through the herders, killing Mergen. One widely cited but unverifiable claim is that the driver boasted he was sufficiently insured to cover the death of a "smelly Mongolian herder". The author of this report – a Mongolian blogger named Zorigt – wrote: "In order to take a shortcut, these coal-hauling trucks have randomly run over local herders' grazing lands, not only killing numerous heads of livestock but also further damaging the already weakened fragile grassland."[7]

Mongolian activists called for rolling protests through the region, culminating in a rally in Genghis Khan Square in Hulunbuir on May 23. The authorities have tried to placate protesters by arresting four men for the killing and damage to grasslands, with a promise of a full investigation and compensation for the bereaved. The media outlet The Guardian reported being blocked from entering the road into West Ujimchin where Mergen was killed, told by an officer that it was "Special circumstances. You're not allowed in. It's not safe." At 4.30 the next morning, two plainclothes police entered the Guardian's hotel room, woke the correspondent, and tried to conduct an interrogation.[7]

Locals called for a worldwide demonstration against China for May 29, to demand the rights of Mongolians and the release of detainees. In response, Chinese authorities declared martial law in major cities of the Mongolian region including Hohhot, Tongliao, Ulaanhad (Chifing in Chinese), and Dongsheng in the face of mass protests by students and herders. Tight Security was imposed as the authorities attempted to quash any protest and unrest.[10]

On May 30, 2011, despite the Chinese authorities’ declaration of martial law and deployment of riot police and paramilitary forces in major cities of Southern (Inner) Mongolia, hundreds of Mongolians took to the streets of Hohhot, regional capital. An unconfirmed report from Duowei News, an overseas Chinese news agency, said a government official told its correspondent in Hohhot that "less than 10 protesters were killed" as authorities dispersed the crowd in front of the Government building.[11]

On June 8, 2011, coal truck driver Li Lindong was sentenced to death for killing the Mongolian herder Mergen, who was dragged under Li's vehicle. The verdict of the Intermediate People's Court of the Xilin Gol League in Inner Mongolia was announced immediately after the six-hour trial ended.

Lu Xiangdong, who was sitting beside Li in the truck when Mergen was dragged to his death under the vehicle, was sentenced to life imprisonment. Two others, Wu Xiaowei and Li Minggang, were both given jail terms of three years for obstructing justice. The four men said they would appeal.

Mergen and 20 other herders attempted to block Li Lindong's vehicle on May 10 to protest against noise and dust created by coal trucks going through Mergen's village, which is located in the Xi Ujimqin Banner in the Xilin Gol League. According to police, Li Lindong dragged Mergen under his truck for 145 meters before he died. Wu and Li Minggang later blocked the way as police tried to stop the truck, allowing Li Lindong and Lu to escape.[13]

It was reported that on August 25, 2011 that the truck driver who killed Mergen was executed by the Chinese government.[14]

On June 21, 2011, a court in China's vast northern region of Inner Mongolia sentenced to death a coal mine worker, Sun Shuning, for killing a resident, Yan Wenlong, who had complained about pollution from a coal mine. Sun killed Wen with his forklift.[15]

An investigative report released in December 2008 said that public security officials in the city of Xintai in Shandong Province had been institutionalizing residents who persisted in efforts to expose corruption or the unfair seizure of their property. In one case, a 57-year-old farmer seeking compensation for land ruined by a coal-mining operation, was seized by authorities in October on his way to petition the central government in Beijing. He was taken to the Xintai Mental Health Center in October. He was detained for 20 days, during which time he said he was lashed to a bed, forced to take pills, and given injections that made him dizzy and numb.[16]

Retrieved from "https://www.gem.wiki/w/index.php?title=Opposition_to_coal_in_China&oldid=240922"
Categories:
This page was last edited on 30 April 2021, at 11:24.
Content is available under Creative Commons Attribution-NonCommercial-ShareAlike unless otherwise noted.
Privacy policy
About Global Energy Monitor
Disclaimers