With little or no coal reserves, California has no history of coal mining.[7] The coal power industry is also very weak in the state, which is dominated by natural gas-fired and hydroelectric power production. The largest coal-fired power plant in the state has a capacity of 109 MW.

In October 2010, the California Public Utilities Commission signaled that it would end investments will be allowed at Four Corners Steam Plant after 2012 to be in compliance with SB 1368, the Emissions Performance Standard. The law, passed in 2006, prohibited new ownership investment in power plants that fail to meet minimum performance standard for carbon emissions. This law effectively prohibited investment in coal burning plants. Southern California Edison owns 48% of two of the generating units at Four Corners.[9]

On Valentine's Day, more than 25 activists in San Francisco called on Bank of America to stop funding mountaintop removal mining. The Rising Tide Bay Area protesters served the bank a foreclosure notice for "failing to pay its social and environmental debts" and closed accounts with the bank, pulling out over $10k in San Francisco alone. The action was part of a nationwide campaign against Bank of America organized by Rising Tide North America.[11]

More than fifty people marched through downtown Palm Springs to call attention to the need for a moratorium on the construction of new coal-fired power plants. Protesters carried signs reading, "Quit Coal Now!" The march was part of the Power Past Coal campaign, a 100-day national action that began January 21 runs through April 30.[12] 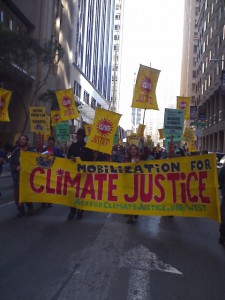 Activists march against Bank of America on November 30, 2009.

More than 200 activists from Rainforest Action Network and other environmental groups marched to the Bank of America skyscraper in San Francisco to protest the bank's coal financing and interference in climate legislation. Dozens of protesters blockaded the building, some of whom locked themselves inside the building's revolving doors to disrupt business. 22 activists were arrested.[13]

In January and May of 2007, the California Energy Commission banned municipal and investor-owned utilities within the state from signing new contracts with out-of-state coal-fired power plants. This move had an immense impact on the coal power industry, as California is a chronic power importer.[14]

The Global Warming Solutions Act of 2006 requires that the state reduce its greenhouse gas emissions by 25 percent by 2020.[15] The state is currently negotiating legislation that would mandate an 80 percent reduction in CO2 emissions by 2050.[16]

SB 1368 and the "Schwarzenegger clause"

California enacted SB 1368 to send a strong signal to the western energy markets. Our energy must be clean – we won’t buy power from coal plants spewing greenhouse gases by the ton. To be clear, California has not said "no" to coal; rather, we’ve said that we want cleaner coal plants that can provide us energy without producing massive global warming pollution.

To be clear, California has not said "no" to coal; rather, we’ve said that we want cleaner coal plants that can provide us energy without producing massive global warming pollution.

As a result of SB 1368, California regulators limited new coal-fired power plants to an output of 1,100 lbs of CO2 per megawatt hour (MWh). Expressed in metric measures, this is 500 kg CO2/MWh (i.e. 500 kilograms of carbon dioxide per Megawatt hour).[17]

Governor Schwarzenegger has threatened to veto the bills and instead issue an executive order bypassing the legislature. Under these provisions, renewable energy goals can be repealed when a new governor is elected in 16 months. In addition, the executive order would effectively create a loophole for the 2010 mandate of 20 percent renewable requirements. According to a press release by the group Renewable Energy Accountability Project, ConocoPhillips and Occidental Petroleum made donations totaling $50,000 to the Governor's ballot measure committee account on September 10, 2009, just one day before the legislature approved the bills. In addition, major utility companies PG&E, Sempra, and Southern California Edison dropped their opposition to SB 14 and AB 64 at the last minute, suggesting that they may have known of the governor's intention to veto the bills. Since 2003, PG&E, SCE, and Sempra have contributed a total of over $770,000 to Gov. Schwarzenegger's campaign and administration. REAP is calling for an investigation into the influence of the utility industry on the governor's office.[21]

On April 12, 2011, Gov. Jerry Brown signed legislation that will require California utilities to get one-third of their electrical power from renewable sources, giving the state the most aggressive alternative energy mandate in the entire U.S.

California utilities and other electricity providers have until the end of 2020 to draw 33 percent of their power from solar panels, windmills and other renewable sources.[22]

The California Air Resources Board on October 20, 2011 unanimously adopted the nation's first state-administered cap-and-trade regulations. The market system for the puts a price on heat-trapping pollution by allowing California's energy industry to trade carbon credits. Cap-and-trade is the centerpiece of Bill (AB 32), California's climate change law that mandates a reduction in carbon pollution to 1990 levels by 2020. By 2013 the state's largest carbon emitters will be required to meet the caps or buy credits if they are not able to meet standards.[23]

California is the country's most energy-efficient state and was one of the first states to enact energy-efficiency standards for new homes, buildings, and household appliances. A study released in October 2008 by the University of California at Berkeley estimated that Californians use about 40 percent less electicity than the average American. The study also found that energy efficiency saved California $56 billion in electricity costs and created 1.5 million jobs over 35 years. The state's plan to reduce greenhouse gas emissions over the next twelve years, which also includes emission caps and increased energy efficiency standards, could create 400,000 new jobs and increase household incomes by up to $48 billion annually by 2020.[24]

On November 5, 2008, the city of Berkeley launched a new program called Berkeley FIRST (Financing Initiative for Renewable and Solar Technology.) Under the new program, homeowners can apply for loans to install solar panels and other energy efficiency improvements. The loans are backed by city bonds and will be repayed over 20 years via assessments added to individual property bills. If a property owner moves, the loan transfers to the new owner via the same assessment. The FIRST program will initially fund 40 installations distributed throughout the city, providing up to $37,500 per installation for either residential or commercial properties.[25][26]

Coal-fired power plants provide Los Angeles with 44 percent of its energy. In March 2010, the L.A. Department of Water and Power (DWP) Board of Commissioners unanimously approved Los Angeles Mayor Antonio Villaraigosa's initiative that will create green jobs and harness the area's ample sunlight. The solar power generation will wean the city off of coal. The City Council approved the measure in March 2010 and will work to eliminate electricity produced by coal by 2020.[27] However, it was reported in December 2010 that DWP may not reach its renewable energy goals set by Mayor Villaraigosa due to a lack of funding. DWP executives warned that they would not be able to sustain that achievement, let alone reach future goals, without guaranteed funding from taxpayers.[28]

In early October 2012 the Los Angeles City Council approved the L.A. Department of Water and Power's plan to invest in clean energy and wean the city off of coal. In 2011 L.A. shipped $500 million out of state to purchase coal produced energy. The vote is estimated that it will create 5,000 jobs in energy efficiency and rooftop solar in the L.A. metro area.[29]

On March 30, 2010, Southern California Edison (SCE) informed Arizona Public Service (APS) of the company's intentions to divest its 48 percent stake of Four Corners Power Plant by 2016. According to APS, Southern California Edison announced it did not plan to sell its shares on the open market. SCE, which supplies power to greater Southern California, does not believe that Four Corners' coal burning is the energy wave of the future. Other issues that may have prompted SCE to divest its interests include proposed legislative initiatives to regulate carbon from power plants, Best Available Retrofit Technology requirements for the plant by fall 2010, and the possible regulation of coal fly ash as a hazardous waste.[30]

California had 10 coal-fired generating units at eight locations in 2005, with 439 megawatts (MW) of capacity - representing 0.7% of the state's total electric generating capacity.[1][31][32] None of these units is larger than 50MW.[33][34]Click on the locations shown on the map for plant details. (To see a map of existing coal plants in the U.S., click here.)

In total, California's coal-fired electric generating stations produce 1.0% of the state's total CO2 emissions and 2.4% of its total SO2 emissions.[3]

LADWP derives 44 percent of its power from coal[37]

In 2005, it was reported that California utilities owned 4,582 MW of capacity in six coal plants located in nearby states. Since that report, the Mohave plant has shut down. The average generation of those coal plants in the 2002-2003 period was 60 TerraWatt hours (TWh).[38]

There are no coal mines in California.[39]

Retrieved from "https://www.gem.wiki/w/index.php?title=California_and_coal&oldid=229378"
Categories:
This page was last edited on 29 April 2021, at 20:34.
Content is available under Creative Commons Attribution-NonCommercial-ShareAlike unless otherwise noted.
Privacy policy
About Global Energy Monitor
Disclaimers