The following table shows coal production and productive capacity by state in 2013.

The U.S. is estimated to contain more coal reserves than any other country in the world, or 27% of the 2006 recoverable coal reserve estimates of around 800 or 900 gigatons. While data quality varies widely, the countries with the greatest estimated recoverable reserves of coal are:[2]

However, coal reserves are difficult to measure due to differences between the amount of coal in the ground and the amount of coal that will ultimately be mined, assuming constraints ranging from physical barriers to technological limitations to environmental regulations. As Table 2 shows, even in the comparatively well-studied United States, the exact definition of reserves and resources results in a 200-fold difference between U.S. estimates of "total resources" (4,000 billion short tons) and "recoverable reserves at active mines" (19 billion short tons).

Table 3: Major Holders of U.S. Coal Reserves (Billion short tons). Note: Figure for U.S. Government is based on a National Mining Association calculation based on federal ownership of about one-third of the United States' coal reserves of 264 billion short tons.[4] 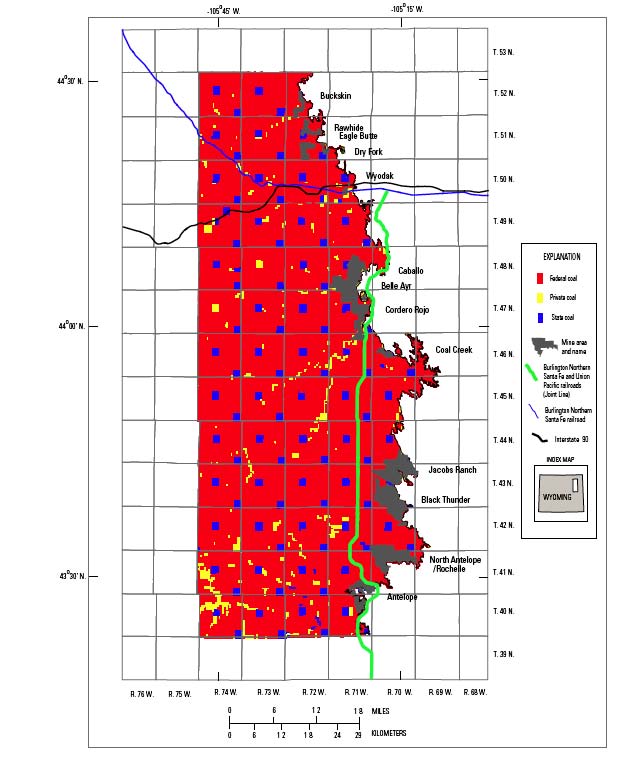 The following table lists the 52 coal mines in the United States that produced at least 4,000,000 short tons of coal in 2007. Data have been compiled by the Energy Information Administration of the United States Department of Energy.

Mountaintop removal mining (MTR) is a form of surface mining increasingly being used to replace underground mining to extract coal from the Appalachian Mountain regions of eastern Kentucky, southwest West Virgina, southwest Virginia and eastern Tennessee[39]. The process involves using explosives to remove up to 1,000 vertical feet of rock to reach the coal seams. The resulting debris is often scraped into the adjacent valleys in what is called a valley fill. [40][41][42]

Because of the physically destructive nature of the practice, MTR is controversial and has received national and international media attention prompted by a groundswell of grassroots activism and resistance by local residents, environmentalists, social justice activists and others[43][44].

Coal mining, especially mountaintop removal, has a number of adverse effects on the environment:

Coal sludge, also known as slurry, is the liquid coal waste produced by mining activities. After mining, coal is crushed and washed to remove the surrounding soil and rock. The washing process generates huge amounts of liquid waste, and the mining process itself produces millions of tons of solid waste. Coal companies usually dispose of this waste by constructing dams from the solid mining refuse to store the liquid waste. These impoundments are usually located in valleys near their coal processing plants, and have broken apart and flooded and polluted residential areas, such as the Martin County sludge spill.[47]

Coal sludge is filled with toxins. Each year coal preparation creates waste water containing an estimated 13 tons of mercury, 3236 tons of arsenic, 189 tons of beryllium, 251 tons of cadmium, and 2754 tons of nickel, and 1098 tons of selenium.[48]

The term coal sludge is also sometimes used to refer to coal waste as a whole.

Most climate policy recommendations having to do with coal and climate change have focused on measures to limit the yearly output of greenhouse gases; for example placing a moratorium on new coal-fired power plants that do not sequester their carbon dioxide emissions and then phasing out existing plants. Such recommendations generally assume that coal reserves are too massive to not pose a potential limitation to climate change. If anything, coal usage would rise if other sources, particularly oil, were to run short. For example, in 2004, the Intergovernmental Panel on Climate Change (IPCC) concluded:[50]

Absolute fossil fuel scarcity at the global level is not a significant factor in considering climate change mitigation. Conventional oil production will eventually peak, but it is uncertain exactly when and what the repercussions will be. The energy in conventional natural gas is more abundant than in conventional oil but, like oil, is not distributed evenly around the globe. In the future, lack of security of oil and gas supplies for consuming nations may drive a shift to coal, nuclear power and/or renewable energy.[4.3.1].

There are arguments that world coal reserves are overstated by the IPCC, and that depletion of coal reserves, or "peak coal," might limit the extent of potential warming caused by coal, especially if those reserves could be reduced yet further by policies to move some coal into off-limits status. Noting that the a third of U.S. coal reserves are located on federal lands, Dave Rutledge suggests that a government program aimed at sidetracking a portion of those reserves would be more effective in limiting ultimate global warming than attempting to limit annual usage of coal.[51]

There are a number of national, regional, state, and local groups working on coal issues.

For a list of organizations, see Citizen groups working on coal issues. 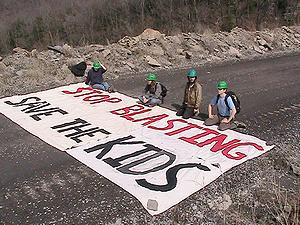 On August 15, 2005, Earth First! and Mountain Justice Summer activists blockaded a road leading to National Coal's mountaintop removal coal mine in Campbell County, Tennessee. Activists stopped a car on the road, removed its tires, locked themselves to the vehicle, and erected a tripod with a person perched on top of it. National Coal workers arrived and threatened the protestors; one tried to ram the tripod with his car. Eleven people were arrested.[52][53]

Since that time anti-coal protesters in West Virginia have been facing escalated legal struggles as a result of their non-violent actions against mountaintop removal. Protests in 2008 were often met with arrests for trespassing, where the individuals involved in the actions were ticketed and released.[54]

In February 2009, 100 were arrested in connection with the non-violent direct actions taken by the group Climate Ground Zero against Massey Energy, in protest of its mountaintop removal practices. Federal U.S. District Judge Irene Berger barred protesters from "trespassing" on Massey Energy property. [55]

After Climate Ground Zero's actions against Massey, bails have increased as well as charges. Protesters have been denied the right to a bail bondsman in some cases. Critics note that this has been done in an attempt to keep the activists in jail longer. Massey Energy, which has been the target of many of the most recent protests in West Virginia, has filed multiple civil lawsuits against these activists arrested on their property.[54]

On March 2, 2010 environmentalists took their efforts to the West Virginia Supreme Court in an attempt to overturn what they called "overly broad and unconstitutional" restraining orders that were designed to keep protesters away from Massey Energy operations.[54]

Actions in the Powder River Basin

The Powder River Basin accounts for about 37 percent of U.S. coal production.[56] Almost all of the coal in the Powder River Basin is federally owned and further mine expansions will require a series of federal and state approvals,[57] as well as large investments in additional mine equipment to begin the excavations.

On September 21, 2009 Chuck Kerr with Houston-based Great Northern Properties, which owns lands next to Montana coal properties, urged the state to begin leasing and mining the land. Both private and state coal holdings in Montana must be developed together.

On February 2, 2010 the Montana Land Board faced vocal opposition from the Northern Plains Resource Council who wants the Land Board to reconsider leasing Otter Creek for mining rights. Former Resource Council President Beth Kaeding claimed that mining in the area would hurt local farmers.[58] In mid-February 2010, students spoke in Helena at the public Land Board meeting to oppose lowering the State's bid on Otter Creek coal. In Missoula, students from Hellgate High School protested in the streets in opposition to the Land Board's decision to sell off public lands to coal development, chanting "Hell no to dirty coal!".[59]

Native American lands of the United States are home to large coal reserves and coal mining, making its indigenous residents disproportionately effected by the environmental hazards of the coal industry. The common challenges of land and resource development are exacerbated by the poor economic situation of many of the tribes, which raises questions of environmental justice and indigenous sovereignty.[61]

According to the Department of the Interior, twenty-five Native American reservations have coal reserves. Navajo, Hopi, and Crow lands all have coal mines. The Southern Ute, Uintah, Ouray, Fort Berthold, Northern Cheyenne, and Zuni have coal reserves with potential for development.[62]

Retrieved from "https://www.gem.wiki/w/index.php?title=Existing_U.S._Coal_Mines&oldid=242826"
Categories:
This page was last edited on 5 May 2021, at 18:54.
Content is available under Creative Commons Attribution-NonCommercial-ShareAlike unless otherwise noted.
Privacy policy
About Global Energy Monitor
Disclaimers