Port of Coos Bay is located on the Oregon coast. It is the largest deep-draft coastal harbor between San Francisco Bay and Puget Sound, and is Oregon's second busiest maritime commerce center after the Port of Portland. The port was the site of a proposed coal export terminal that was abandoned after public pressure.

In July 2011, it was reported that the port in Coos Bay, Oregon was considering coal exports. "We are in discussions with coal developers and have entered into nondisclosure agreements with those companies," Port of Coos Bay CEO Jeff Bishop. "We don't want anyone to be surprised." 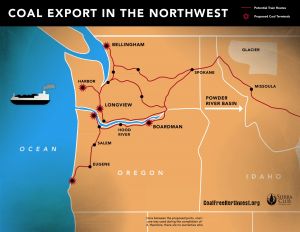 Bishop stated the arrival of one coal train per day would create 100 ship calls per year. However, coal exports would bring too many ships for the cargo terminal to handle, stated Bishop. "If any coal terminal is developed in Coos Bay, it would have to be a stand-alone terminal."[1]

In October 2011 the Port of Coos Bay signed an exclusive negotiating agreement with an unnamed company interested in shipping coal from Coos Bay, Oregon.[2]

In April 2012 Oregon Governor John Kitzhaber stated that he wants an extensive federal government review of exporting coal to Asia through Northwest ports. The Governor said that coal exports could clog barge and train routes, increase diesel and coal dust pollution and boost amounts of toxic mercury drifting back to Oregon when Asian countries burn the coal.

However, Kitzhaber didn't take a stand for or against exporting coal, which supporters say would increase rural jobs and tax revenues in Oregon and Washington. Instead, his letter asked the federal government to address how increasing exports to Asia will "fit with the larger strategy of moving to a lower carbon future."[3]

In August 2012 Democratic Rep. Peter DeFazio said he has few qualms about shipping coal to Asia through the Port of Coos Bay.

Rep. Peter DeFazio said that trying to block plans to ship coal to Asia won't stop countries like South Korea from burning coal to produce electricity. He added that free trade agreements make it illegal for the U.S. to block coal exports to South Korea.[4]

In April 2013, the Port of Coos Bay announced that it had ended its agreement with Metro Ports of California. Earlier, two other participants in the deal -- Mitsui and Korean Electric Power Corporation -- ended their participation. According to activists, the reported developments had reduced but not eliminated the likelihood of coal exports from the port.[5] According to the group Coos Waterkeeper, the port may still pursue coal export, but expensive rail improvements needed to accommodate coal trains make the prospects "highly unlikely."[6]

In early October 2012 dozens of coal-train protesters on Monday evening marched to the downtown library, where the City Council heard testimony on a resolution against shipping coal through a Port of Coos Bay terminal to Asia. During the meeting a number of people spoke in favor of the measure, expressing concerns about coal dust and climate change. But the council also heard from supporters, others spoke in favor of job creation from the terminal. The council is set to vote by the end of October 2012 on the measure. On October 22, 2012 the city council of Eugene passed a resolution 5-3 opposing the coal trains.[7][8]

The port was damaged on March 11, 2011 by a tsunami caused by the 2011 Tōhoku earthquake and tsunami off the coast of Japan.[9]

Wikipedia also has an article on Port of Coos Bay. This article may use content from the Wikipedia article under the terms of the GFDL.

Retrieved from "https://www.gem.wiki/w/index.php?title=Port_of_Coos_Bay&oldid=236057"
Categories:
This page was last edited on 30 April 2021, at 11:03.
Content is available under Creative Commons Attribution-NonCommercial-ShareAlike unless otherwise noted.
Privacy policy
About Global Energy Monitor
Disclaimers