The Port of Quintero is a port located in Puchuncaví, Valparaíso, Chile.

The Port of Quintero is a small port and their LOCODE is CLQTV.[1] It is a subsection of the Port of Ventanas.[2]

According to 2020 data from Ember, the Quintero port received 1.4 megatonnes of coal (primarily thermal coal).[3] Between 2017 and 2020, the largest source of coal has been from Puerto Bolivar, Colombia.[3] The port also received coal during this time period from Cienaga (Colombia), Prince Rupert (Canada), Newcastle (Australia), Roberts Bank (Canada), Cam Pha (Vietnam), Santa Marta (Colombia), Abbot Point (Australia), as well as small amounts from the United States.[3] 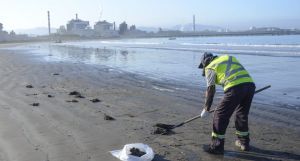 The Quintero Port is located within a Sacrifice Zone of Chile and it's role in providing coal to local power stations which are being phased out due to controversial issues (such as coal washing up on beaches, pollution, and toxic air quality) will lead to a decline of coal imports in coming years.[4] Air quality and toxic gases released from power plants and smelters surrounding the Quintero Port have been a source of contention for local residents who have suffered from dizziness, headaches, and vomiting.[5][6] Academic reports are being used to study the negative health outcomes of locals in Quintero.

In June 2021, the Chilean appellate court ordered the suspension of the arrival of ships with coal to the Bay of Quintero.[7] The transport and unloading of coal at the port was suspended due to the negative health outcomes and inequality it the coal brought to the residents of Quintero.[7]

Between January-July 2021, there were more than 60 coal strandings along the coast of Quintero adding up to a total of more than 830 strandings between January 2009 and July 2021.[8] A study by the Chilean Navy found that underneath pipelines serving the larger Port of Ventanas as well as the AES Gener company there is a build up of coal waste.[8] In late July 2021, the Captaincy of the Port of Quintero established new measures for the unloading of coal via an official letter which the port claims will avoid stranding of coal along the shoreline.[9] A required measure before coal can begin to be imported again is the installation of a containment device between ships and the dock, which must be white and waterproof.[9]

Retrieved from "https://www.gem.wiki/w/index.php?title=Port_of_Quintero&oldid=259355"
Categories:
This page was last edited on 4 August 2021, at 20:33.
Content is available under Creative Commons Attribution-NonCommercial-ShareAlike unless otherwise noted.
Privacy policy
About Global Energy Monitor
Disclaimers