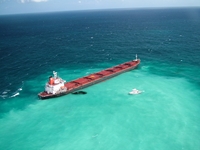 On April 3 2010, a bulk carrier, the Shen Neng 1, was transporting approximately 65,000 tonnes of coal from Gladstone, Australia to China when it ran aground on the Great Barrier Reef. [1]

The accident and immediate aftermath

The bulk carrier sailed outside the shipping lane and ran aground on Douglas Shoal at around 5.10pm on 3 April, 120 km from Rockhampton and 70 km east of Great Keppel Island. In its first media statement on the accident, Maritime Safety Queensland stated that "the ship’s captain has told Maritime Safety Queensland that there is one hole in the ship’s lower hull. The captain has said no oil leak has been detected and the hole is around 40m away from the nearest oil storage area."[2][1][3]

In a subsequent statement, MSQ stated that the ship had "950 tonnes of oil on board. Advice as at 2am is that an unknown amount of oil is in the water.[4] The morning after the grounding, MSQ stated that aerial inspections revealed that there were "a small number of oil patches about two nautical miles south-east from the ship. To date there has been no major loss of oil from the ship." It also stated that "the carrier is aground on a shoal and is not expected to be moved without salvage assistance. A salvage assessment is expected to be made today."[5]

Later that day MSQ stated that spraying of dispersants would be undertaken to "manage a 'ribbon' of oil measuring approximately three kilometres by 100 metres." They also noted that, depending on weather conditions, the oil could "possibly wash up around the Shoalwater Bay military area within the next two days."[6]

The MSQ also later stated that "the initial damage report was that the main engine room was breached, the main engine damaged and the rudder seriously damaged."[7] Svitzer, a salvage company hired by the ship owner, undertook a preliminary damage assessment on the ship. However, MSQ provided little additional detail on the state of the ship other han that the salvage company "are flying in specialist equipment from around the country."[8]

One of the vessel's fuel tanks was damaged: it was initially assumed that up to 150 tonnes of heavy fuel oil had leaked from the ship in a narrow oil slick was extending 2 nautical miles from Shen Neng One, but on investigation, it was found that only 3 to 4 tonnes had been lost.[1][9]

Maritime Safety Queensland (MSQ) is considering the possibility that the ship may break up, releasing another 800 tonnes of fuel oil.[3] Two tugboats were sent out to help secure and stabililse the Shen Neng 1, and a Queensland Maritime Police launch was placed on standby to rescue the 23 crew if necessary.[10]

A preliminary investigation by Maritime Safety Queensland (MSQ) revealed that the Shen Neng 1 was 15 nautical miles off course.[11] MSQ spokesman Adam Nicholson called it "outrageous" that a ship would be that far off course, especially considering that it ended up in an area subject to highly stringent environmental restrictions.[11] According to Nicholson, there is a channel that would have taken the ship well away from the Great Barrier Reef.[11] He likened the situation to a car veering off a two-mile road.[11]

The location of the grounding means that the fuel may contaminate the Great Barrier Reef, specifically the area around Great Keppel Island and Shoalwater Bay.[1] Conservationists, including the Australian Greens political party and the Capricorn Conservation Council, have questioned the lack of requirement to have pilots stationed aboard ships transiting the Barrier Reef.[3]

Queensland Premier Anna Bligh has demanded that Commonwealth authorities "throw the book" at the ship's owner, COSCO (a state-owned Chinese company). According to Bligh, the Shen Neng 1 broke Australian law by being inside the restricted Great Barrier Reef Marine Park, and COSCO could face fines of up to AU$1 million if it is determined that it broke the law.[12] The area is in a section of the Great Barrier Reef Marine Park which is closed to all commercial shipping.

The Federal Minister for Environment Protection, Peter Garrett, stated that an Australian Maritime Safety Authority (AMSA) investigator had been sent to the site and "is working with GBRMPA to explore what breaches or possible offences may have occurred under Commonwealth law. Last year the Australian Government increased the Great Barrier Reef Marine Park Authority's legislative powers to the national standard set by the Environment Protection and Biodiversity Conservation Act."[13]

Wikipedia also has an article on Shen Neng 1 coal carrier collision with the Great Barrier Reef, Australia. This article may use content from the Wikipedia article under the terms of the GFDL.

Retrieved from "https://www.gem.wiki/w/index.php?title=Shen_Neng_1_coal_carrier_collision_with_the_Great_Barrier_Reef,_Australia&oldid=237199"
Categories:
This page was last edited on 30 April 2021, at 11:05.
Content is available under Creative Commons Attribution-NonCommercial-ShareAlike unless otherwise noted.
Privacy policy
About Global Energy Monitor
Disclaimers