The port was designed to provide increased handling capacity to Mukho Hang or the Mukho Port, located North of the Donghae Port.

The Donghae Regional Office of Oceans and Fisheries's website summarized the following about the Donghae Port: [2]

"The area in the vicinity of Songjeong Beach had been developed since 1975, and was developed to the port as cement supply base thanks to its abundant limestone resources, thereby contributing to nation's economic development. In the wake of phase 2 development project finished in November 1999, its logistics handling environment has been significantly improved on the back of expanded harbor facility with Yeongdong and Donghae expressway. With geological advantages in trading with China, Russia and Japan, its function as base port for trading with the nations in the north will be further expanded. At the mouth of a river running along the port, a ferry for small boats with many anglers is available."

According to a 2019 publication, Donghae Port is divided into six piers: Coal Wharf, Southern Dock, Northern Dock, Central Dock, West Dock, and Oil Dock. Coal was listed as the most handled commodity, with 5.2 million "RT" in 2016 (RT is not clearly defined but is assumed to mean tons), followed by cement and ores & metals. The publication noted that the Donghae district was undergoing a three-stage development process with the aim of nurturing a logistics port hub in Youngdong to improve loading capacity, cargo handling capacity, and the industrial complex in the Yeongdong area.[3]

The port is also the site of the Donghae power station.

The Ministry of Oceans and Fisheries has been attempting to improve dangerous environmental conditions at the port related to the port's bulk cargo handling, including by building new warehouses.[7]

GS Global Consortium planned to build a new coal wharf in parallel with the third phase expansion of the Donghae Port:

The existing Donghae Port was built as a 'retractable port': it was dug into the land and lies close to residential areas. The new proposed terminals (on the right in the photo below) would form an 'outer port' that protrudes into the sea:[6] 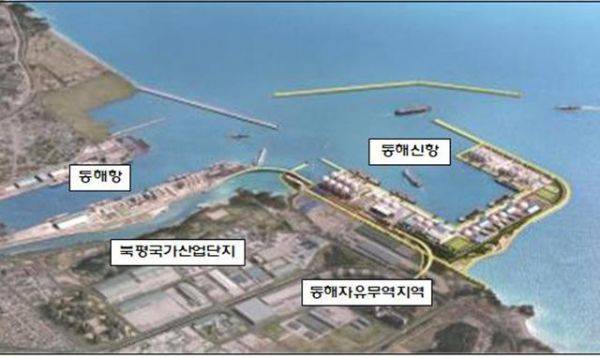 However, in August 2021, GS Global Consortium appeared to abandon plans, blaming decarbonization and coal-free government policies for having made it difficult to raise funds. Only two of the seven berths in the third phase of the Donghae Port project are allegedly being implemented as a state-funded project.[5][8]

As of summer 2021, a 1.8-kilometre-long breakwater had been built off the coast of the Donghae Port, with the 7 piers scheduled to be built by 2030. GS Global had been selected as a private operator for the largest coal terminal, which would have a 100,000 tons storage capacity.[5]

The villages around Donghae Port, which have suffered from dust damage for a long time due to the import of bituminous coal, have been impatiently waiting for the new port to improve environmental conditions. The community hopes to see the coal operations relocated as soon as possible. In August 2021, a banner was hung on the outer wall of the Donghae Port after the project was reportedly abandoned, stating: ‘GS전력 석탄반입 저지한다! 3단계 화물터미널 찾아내자!’ (Google translation: 'Stop importing coal from GS Power! Step 3 Let's find the cargo terminal!'). The community has been experiencing noise, dust, and other pollution for more than 40 years.[8]

North Korean Coal has been illegally Imported through the Donghae Port. For example, South Korea’s Customs Service said about 35,000 metric tons of coal, worth $6.6 billion won ($5.8 million U.S. dollars), was brought into South Korea from North Korea between April and October in 2017, violating United Nations Sanctions. North Korean coal was allegedly transported to the Port of of Kholmsk in Russia, then disguised as Russian coal, and lastly transferred to the South Korean port city.[9][10]

Retrieved from "https://www.gem.wiki/w/index.php?title=Donghae_Port&oldid=279130"
Categories:
This page was last edited on 13 December 2021, at 22:18.
Content is available under Creative Commons Attribution-NonCommercial-ShareAlike unless otherwise noted.
Privacy policy
About Global Energy Monitor
Disclaimers