France no longer has any operating coal mines with the La Houve Mine closing in 2004.[1] However, 23.5 million tonnes of coal were imported in 2005[2], originating from South Africa, Australia, and the United States. The U.S. Energy Information Administration states that approximately half of the coal is used for power generation and the remainder by the steel industry.[3]

The French power generation industry is dominated by the government-owned Electricite de France, which is most commonly referred to as EDF. EDF, the U.S. Energy Information Administration states, "controls almost the entire market for electricity generation and distribution in the country".[4] EDF is noted for its reliance on nuclear power, which generates 79% of the country's electricity. Nuclear power production grew rapidly in the 1970's in response to the OPEC oil shocks and dovetailed in with the French government's emphasis on developing nuclear weapons. 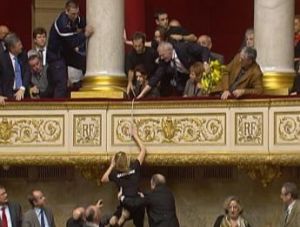 Greenpeace activists interrupted a debate on the CCopenhagen climate summit in the French National Assembly. Protesters waved banners, chanted from the guest galleries, rappelled into the area where parliament members sit. The protesters were evicted, with Green Party members applauding their efforts and other officials decrying the invasion as "counter-productive" and "a violation of democracy."[10]

Retrieved from "https://www.gem.wiki/w/index.php?title=France_and_coal&oldid=231484"
Categories:
This page was last edited on 30 April 2021, at 10:46.
Content is available under Creative Commons Attribution-NonCommercial-ShareAlike unless otherwise noted.
Privacy policy
About Global Energy Monitor
Disclaimers