The National Ambient Air Quality Standards (NAAQS) are standards established by the U.S. Environmental Protection Agency under authority of the Clean Air Act (42 U.S.C. 7401 et seq.) that apply for outdoor air throughout the country. Primary standards are designed to protect human health, with an adequate margin of safety, including sensitive populations such as children, the elderly, and individuals suffering from respiratory disease. Secondary standards are designed to protect public welfare from any known or anticipated adverse effects of a pollutant (e.g. building facades, visibility, agricultural crops, and domestic animals). After the EPA sets or revises each standard and a timeline for implementation, the responsibility for meeting the standard falls to the states. Each state must submit an EPA-approved plan that shows how it will meet the standards and deadlines. These state plans are known as State Implementation Plans (SIPs)." [1] 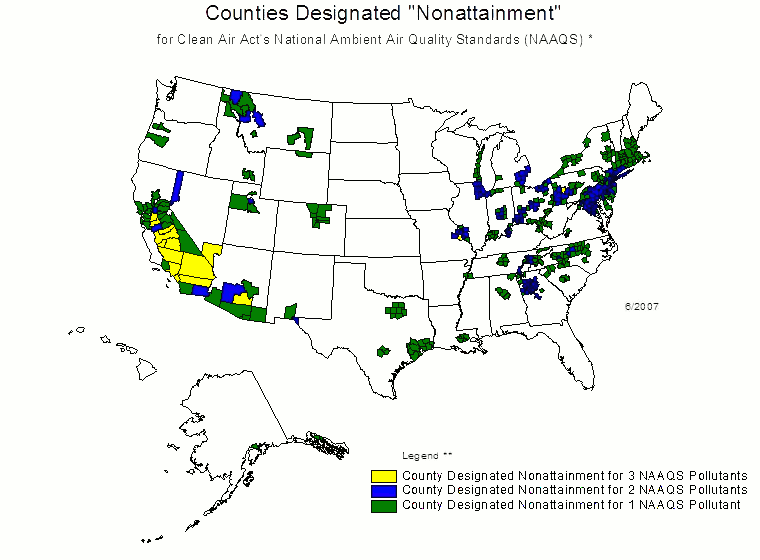 The standards are listed in Title 40 of the Code of Federal Regulations Part 50.

In November 2009, the EPA proposed new National Ambient Air Quality Standards for sulfur dioxide, the first time since 1971 that the agency has recommended tightening controls on SO2 to protect public health. The old limits measured sulfur dioxide averages over 24-hour and one-year periods. The new rule would require one-hour measurements, such that a spike of emissions above a new limit — between 50 and 100 parts per billion in one hour — would no longer be acceptable. The EPA estimates that if the rule is enacted with the strongest limits the agency is recommending, the benefits by 2020 would include 4,700 to 12,000 fewer premature deaths per year and 3.6 million fewer cases of worsened asthma. The agency also calculated that the health benefits of the new regulations would greatly outweigh the $1.8 billion to $6.8 billion costs of the new rules. A public hearing is scheduled in Atlanta in January 2010, with the new rules scheduled to become final by June 2010.[3]

The Ozone National Ambient Air Quality Standards (NAAQS) refers to proposed EPA regulations on ground-level ozone, a primary ingredient in smog linked to respiratory illnesses. In January 2010, EPA Administrator Lisa Jackson said tightening the nation's air-quality standard for ozone was "long overdue," and would save an estimated 12,000 lives a year and yield health benefits up to $100 billion annually in 2020. The EPA proposed setting the standard at between 60 and 70 parts per billion, down from the current 75 ppb, by the end of 2010.[4]

The EPA's proposal has the support of the American Lung Association and the American Medical Association, and is consistent with the recommendation of a 23-member panel of clean-air experts who advised the agency on the issue after reviewing more than 1,700 studies.[4]

In December 2010, the EPA said that it will not decide until July 2011 whether to tighten the national air-quality standard for ozone. In a Dec. 8 written statement, the EPA said it would ask the panel of clean-air experts for "further interpretation" of the studies they relied upon in making their recommendation, so as to ensure the agency's final decision "is grounded in the best science."[4]

In a written statement after the EPA delay, the American Lung Associations said it was "exploring legal options" aimed at requiring the EPA to make a decision on the issue. Based on EPA's own estimates, the group added, a six-month delay means an estimated 2,000 to 6,000 people "will lose their lives because they must breathe air pollution that would have been cleaned up if the EPA had met its most recent deadline of December 31, 2010."[4]

A 2009 court ruling concluded that the EPA standards for the amount of soot permissible in the air on an annual average ignored the advice of scientific advisers by maintaining the standard established in 1997 and must be rewritten. That limit was 15 micrograms per cubic meter of air.[5]

In December 2012 the EPA issued its final NAAQS PM rules, tightening the federal soot standards by 20 percent - the most protective measure laid out in its June 2012 draft rule (12 micrograms per cubic meter of air). The agency will determine which areas are out of attainment in 2014, and the communities will then have six years to comply. The EPA estimates that 66 of the nation’s 3,033 counties will be found in violation of the new standard. It projects seven — all in California — will still be out of compliance by 2020.[6]

Retrieved from "https://www.gem.wiki/w/index.php?title=National_Ambient_Air_Quality_Standards&oldid=235089"
Categories:
This page was last edited on 30 April 2021, at 11:02.
Content is available under Creative Commons Attribution-NonCommercial-ShareAlike unless otherwise noted.
Privacy policy
About Global Energy Monitor
Disclaimers