Port Qasim (Urdu: بندر گاہ محمد بن قاسم Bandara gāh muham'mad ban qāsim), also known as Port Muhammad Bin Qasim, is a seaport in Karachi, Pakistan, on the coastline of the Arabian Sea. It is one of Pakistan's busiest ports.

It is different from the Karachi Port, which is located approximately 58 kilometers (38 miles) west of Port Qasim.

Port Qasim is adjacent to Bin Qasim town, in the southern part of Malir district, Karachi division, in Sindh. It is located in an old channel of the Indus River at a distance of 35 kilometers east of Karachi city center.

Port Qasim and Karachi Port, the busiest port of the country, together handle more than 90% of all external trade of Pakistan.

The Port Qasim Iron Ore and Coal Berth (IOCB) was commissioned in 1980. It has a specialized berth for handling iron ore, coal, and manganese for Pakistan Steel Mills exclusively. The design capacity of the berth stands at 3.03 million tonnes per annum.[3]

PIBT was Pakistan's first terminal for handling coal, clinker, and cement at Port Qasim. The company signed a Build Operate Transfer (BOT) contract with Port Qasim Authority in November 2010 for the construction and development of a coal and clinker terminal for the next 30 years. The terminal started commercially operating in July 2017. As of 2020, PIBT had a built capacity for handling up to 12 million tons of coal, 4 million tons of cement, and 4 million tons of clinker per year. Pakistan Railways was likely to construct a railway track to tie PIBT's terminal with the railway network, subject to the Planning Commission's approval.[4]

The Port Qasim EPC power station has a coal terminal near Port Qasim. The implementation agreement was signed in April 2015 and the terminal became operational in August 2017.[5][6]

Sinohydro Harbour was awarded the engineering, procurement, and construction (EPC) contract for the coal unloading jetty and channel. Consultant and Construction Supervision, a subsidiary of CCCC Second Harbor Consultants, was awarded the management consulting (supervision) services contract for the coal unloading jetty. Coal unloaded at the plant's jetty is sent to the coal yard in the plant by a belt conveyor. A bucket-wheel stacker-reclaimer is used at the coal yard for coal settling. The coal is then screened and crushed before being fed into the boiler coal bunker.[7]

The Huaneng Fuyun Coal Terminal involved conversion of berths 3 and 4 into a specialized coal wharf to unload, stack, and supply imported coal for the 2 x 660 MW Sahiwal power station.[8][9] 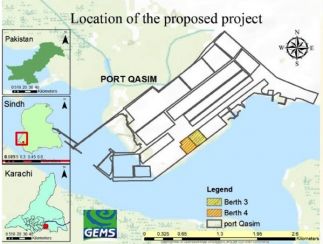 Wikipedia also has an article on Port Qasim. This article may use content from the Wikipedia article under the terms of the GFDL.

Retrieved from "https://www.gem.wiki/w/index.php?title=Port_Qasim&oldid=264792"
Categories:
This page was last edited on 4 October 2021, at 20:25.
Content is available under Creative Commons Attribution-NonCommercial-ShareAlike unless otherwise noted.
Privacy policy
About Global Energy Monitor
Disclaimers