Shortly after 10 p.m. on Monday, July 14th 2014 the Japanese-owned coal 228-metre Amakusa Island ship ran aground in the outer harbour of Prince Rupert in British Columbia, ripping a 2 metre long hole in the outer hull. At the time of the accident the ship was loaded with approximately 80,000 tonnes of coal.[1] (It was later reported that the gash in the hull was 30 metres in length.[2]) The Transportation Safety Board of Canada states on its website that the accident happened "south of Gull Rocks when the vessel departed Prince Rupert."[3]

The ship departed for Japan on September 9 after the completion of repair work.[2]

In a media release the Prince Rupert Port Authority stated that the "vessel ran aground some 15 kilometres from Ridley Island while shifting its position from berth at the Ridley Terminals coal terminal to its assigned anchorage ... Although the Amakusa Island listed visibly, no injuries or environmental contamination have been reported or observed. The vessel was freed with the assistance of tugs from SMIT Marine Canada at approximately 2:30 a.m. It proceeded to an anchorage under its own power, escorted by two tugs and the Port Authority’s harbour patrol boat."[4]

It was initially reported by the Vancouver Sun that at the time of the accident the ship had a pilot on board and was being moved in good weather from a berth at the Ridley Terminal’s coal terminal to an anchorage. It was also reported that the rip in the ships outer hull had resulted in two forward ballast compartments being flooded.[5]

Coastal First Nations executive director Art Sterritt told the Vancouver Sun that at the time of the accident that weather conditions were “very, very, very, very good.” Sterritt said that "mistakes happen, and no matter what kind of technology you have or how good your pilots are or anything else — all the stuff that Northern Gateway [which is proposing to export oil through Prince Rupert] has been throwing at us — at the end of the day, people are fallible and accidents happen."[5]

"When they claim that 99.6-per-cent success rate, they’re doing thousands of movements a year, so that’s three or four incidents per year. It’s inevitable. If you’re going to have this kind of traffic you’re going to have these incidents involving big ships,” said Brian Falconer, marine operations coordinator for Raincoast Conservation Society.[5] 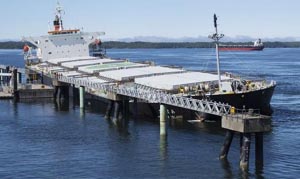 On July 23, after nine days at anchor, the Prince Rupert Port Authority announced that the Amakusa Island would be moved from the outer harbour to the Northland Cruise Terminal berth in Prince Rupert’s inner harbour where repairs would be undertaken. "Dive teams will use metal plates to seal a tear in the outer hull, which allowed seawater to enter three of the double-bottomed ship’s ballast compartments after the grounding. Repairs are anticipated to take approximately two weeks," the authority stated.[1]

On August 7 it was reported that the repair work - comprising the underwater welding of steel plates over the hole in the hull - would take a further week to complete. "After it's received these repairs, it will head over to Asia where it will discharge its 80,000 tons of coal and then it will be repaired fully. This is really just a patch job so they can pump out the water from the ballast compartments and then deliver its cargo," said Prince Rupert Port Authority's Michael Gurney.[6]

The Transportation Safety Board of Canada (TSB) has primary responsibility for the investigation of the grounding. The day after the grounding the TSB dispatched investigators to Prince Rupert.[7]

Retrieved from "https://www.gem.wiki/w/index.php?title=The_grounding_of_the_Amakusa_Island_ship_in_Prince_Rupert_harbour,_British_Columbia,_Canada&oldid=238097"
Categories:
This page was last edited on 30 April 2021, at 11:06.
Content is available under Creative Commons Attribution-NonCommercial-ShareAlike unless otherwise noted.
Privacy policy
About Global Energy Monitor
Disclaimers