The sinking of the MV Rak off Mumbai, India

On August 4 2011 the Panamanian-registered MV Rak, which was carrying 60,000 tonnes of Indonesian coal, sank approximately 20 nautical miles off the coast of Mumbai.[1]

It was reported that the ship was owned and managed by a Qatar based company and carrying approximately 290 tonnes of fuel oil and 50 tonnes of diesel oil. The ship's cargo originated from Lubuk Tutung in Indonesia and was to be delivered to to Dahej in Gujarat. The cargo belonged to Adani Enterprise Limited (AEL). A spokesman for Adani stated that the cargo was fully insured and that the accident would not affect the company's finances.[2]

The inspector general of the Coast Guard, Mr SPS Basra, stated that the suspected cause was leaks in the hull allowing water into the ship's holds.[1]

The ships crew of 30 was rescued by the Coast Guard.[2] 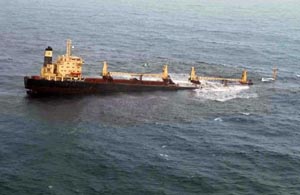 After the ship sank on August 4, an oil slick was reported as having been sighted on August 6 and spread near the coast. "Since last night, oil has been observed leaking from the sunken vessel Rak Carrier at an approximate rate of 1.5 to tonnes per hour. The oil has spread about 7 nautical miles around the vessel," a Defence press release said.[3]

The local fishing community was concerned about the possible impacts of an oil spill. “We suspect that the coal and the oil from the sunken ship will reach shores within a couple of days,” said Damodar Tandel, president of Akhil Maharashtra Machhimar Kriti Samiti.[4]

While the Indian Coast Guard had two ships spraying the slick with dispersants, the slick came in close to the coast. "It is quite close to the shoreline and there is not much distance separating the oil from the beaches and mangroves. Since this is the breeding season, this is the most vulnerable time of the year," said Debi Goenka, an environmentalist.[5]

Several days after the oil slick was first noticed, the Coast Guard estimated that due to winds and heavier seas the volume of oil leaking into the sea had increased to between eight and ten tonnes a day. A Director General of Shipping official stated that “expert divers would identify the source of leak and plug the leaks to decrease the flow of crude oil into the ocean if possible."[6]

After the sinking the owner, captain and the chief engineer of ship were arrested and charged with "endangering life or personal safety of others", the Deputy Police Commissioner (Port Zone) Tanaji Ghadge said.[7]

The captain, Arkan Abdul Khalil Yunus (36), a Jordanian, and chief engineer Ioneseu Ion (54), a Romanian, were later released on bail. After oil began to leak from the sunken vessel, they were also charged with offences under environmental legislation. "As the Rak started spilling oil, causing water pollution and environmental problems, today, we added relevant sections of Environment (Protection) Act and Water (Prevention And Control Of Pollution) Act as well against them," said Bharat Bhoite, Inspector at Yellow Gate police station.[8]

Retrieved from "https://www.gem.wiki/w/index.php?title=The_sinking_of_the_MV_Rak_off_Mumbai,_India&oldid=238103"
Categories:
This page was last edited on 30 April 2021, at 11:06.
Content is available under Creative Commons Attribution-NonCommercial-ShareAlike unless otherwise noted.
Privacy policy
About Global Energy Monitor
Disclaimers