Welspun Energy is a power generation subsidiary of the Indian textiles, oil and gas and pipe manufacturing company, the Welspun Group.[1]

(Note: The Ministry of Coal lists the Welspun Urja Power Plant as a separate 1320MW project at Naila in Chhattisgarh on one page and then in a separate listing on the same page lists "Welspun Energy Chhattisgarh Limited" as the proponent of a 1960MW project also at Naila in Chhattisgarh. A few pages later the document separately lists a 1960MW proposal from Welspun Energy Madhya Pradesh Limited "(earlier known as Welspun Urja Power Plant)" for "Amla/Betul/Madhya Pradesh". Assuming the Ministry document is compiled chronologically, the confusing listing may best be interpreted, at least pending further research, as the Welspun Urja Power Plant initially being proposed as a 1320MW project, then upgraded to 1960MW at the same location and then dropped and proposed instead at Amla in Madhya Pradesh.)

Other projects which have been attributed to Wespun are:

In October 2015, Adani Group signed an initial agreement to buy the Katni power station and Welspun Energy Mirzapur power station in Uttar Pradesh.[5] However, there were no subsequent reports that the deal had actually been finalized.

In June 2016, Tata Power Company purchased the renewable energy portfolio of Welspun Energy Pvt Ltd for an estimate Rs 10,000 crore (US$1.4 billion). As of December 2016, none of the annual reports of any companies affiliated with Welspun Group make any mention of involvement in coal plants. It appears that in the wake of its apparently unsuccessful attempt to sell its coal power projects in Madhya Pradesh and Uttar Pradesh, and its transition into a builder of renewable power, followed by its sale of its renewable portfolio to Tata, the company has abandoned further plans to develop new coal power in India, including Mirzapur power station. [6] Both projects were the site of intense protest, including the self-immolation of a woman protesting land acquisition practices at the Katni power station.

November 2012: Woman immolates herself in protest 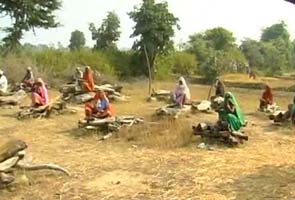 In November 2012, NDTV reported that twenty farmers in Bujbuja village sit every day on funeral pyres with kerosene and match sticks at arm's reach to protest acquisition of land for the plant.[7] On Diwali, Katni district villager Sunia Bai died one day after she set herself on fire on Diwali day, in protest over land acquisition for the plant. Following the self-immolation, police responded to a protest by residents of Bujbuja and Dakaria villages with a lathicharge, seizing the body. According to villagers, the police had threatened to bulldoze the home of Sunia Bai and her husband Chhaka Gadari. In addition, police arrested 12 villagers as well as former Janata Dal (United) MLA Saroj Bachchan Nayak. Protesters demanded that land acquired for the project be returned to farmers. Farmers also built funeral pyres on their land and warmed that they would immolate themselves if forcibly evicted. A second villager threatened with eviction, Pyare Lai Choudhary, was admitted to the hospital after drinking poison in a suicide attempt.[8][9][10]

In a January 2011 media release Welspun stated that it "has also acquired a stake in Leighton India, part of the Australian conglomerate Leighton Holdings".[11] On its website Leighton states that "Leighton Contractors (India) Pvt. Ltd. entered into a strategic partnership with Welspun Infra Projects Pvt Ltd (WIPPL) a part of the US $3 billion Welspun Group, leading to the formation of Leighton Welspun Pvt Ltd."[12]

Retrieved from "https://www.gem.wiki/w/index.php?title=Welspun_Energy&oldid=238881"
Categories:
This page was last edited on 30 April 2021, at 11:07.
Content is available under Creative Commons Attribution-NonCommercial-ShareAlike unless otherwise noted.
Privacy policy
About Global Energy Monitor
Disclaimers