Venezuela is a small coal producer, ranked 55th in the world, producing 0.3 million tonnes in 2019.

Venezuela has an abundance of coal reserves - with the third largest in Latin America- on which it has begun to rely more heavily due to US oil sanctions.[1] Increasing coal production is the State strategy to mitigate the economic damaged caused by lost oil revenues.[1] 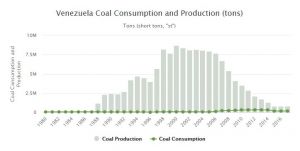 Venezuela currently produces 0.2 million tonnes per annum, a dramatic decline from earlier in the century. In 2006 Venezuela produced approximately 7.4 million tonnes of bituminous coal, according to the U.S. Geological Survey (USGS).[4] The sole operating coal mine in 2006 was the CoalCarbones del Guasare, S.A operation. The joint venture partners were listed as being Carbozulia S.A. with a 49% stake and Peabody Energy and Anglo Coal with a 25.5% stake each. The mine is located near Paso Diablo in Zulia State in the Guasare coal basin and has a rated production capacity of 8 million tonnes a year.[5]

Peabody Energy, which refers to the mine as the Paso Diablo Mine, states on its website that the mine "is a 6.6 to 8.0 million ton-per-year surface operation that exports coal for electricity generators and steelmakers in North America and Europe. Paso Diablo utilizes the truck-shovel method to access approximately 175 million tonnes of reserves (in the current coal concession) in the Guasare coal basin ... Most coal travels approximately 90 kilometers to the port at Santa Cruz de Mara on Lake Maracaibo ... Peabody markets a proportional amount of the mine's output to customers of seaborne coal seeking high-Btu, low sulfur thermal coal for electricity generation and PCI coal for use in steel production."[6][7]

Venezuela does not import notable amounts of coal, particularly since the economic crisis began.[8]

Retrieved from "https://www.gem.wiki/w/index.php?title=Venezuela_and_coal&oldid=257842"
Categories:
This page was last edited on 16 July 2021, at 15:48.
Content is available under Creative Commons Attribution-NonCommercial-ShareAlike unless otherwise noted.
Privacy policy
About Global Energy Monitor
Disclaimers