Coal is the world's most abundant fossil fuel, but its mining and use are associated with significant environmental impacts.[1]

The local environmental hazards of coal vary from place to place. While some communities are most affected by air pollution from coal-fired power plants, others endure toxic groundwater from mining.[2]

This article outlines how coal mining, preparation, and combustion releases major contaminants into the environment--from the pollution of the air, water, and land, to the emission of greenhouse gases like carbon dioxide and methane.

For 1999, the U.S. Energy Information Agency estimated that coal plants produced 2.095 pounds of carbon dioxide per kilowatt hour. This represented a 4% improvement from the 2.117 pounds per kilowatt hour in 1998.[35]

NASA scientist James Hansen, who reported to the U.S. Congress that climate change was underway in 1988, has been particularly critical of the coal industry, stating that coal contributes the largest percentage of anthropogenic carbon dioxide into the atmosphere.[36] He acknowledges that a molecule of carbon dioxide emitted from burning coal has the same effect as a molecule emitted from burning oil, but that the difference is where the fuel originally resides. He says that most oil comes from Russia and Saudi Arabia, and that no matter how fuel-efficient automobiles become, the oil will eventually be burned and the carbon dioxide emitted, but that a phase-out of coal is entirely possible. In a 2007 testimony before the Iowa Utilities Board, he stated that the United States has a large reservoir of coal, which makes it a resource that can be controlled through action by U.S. politicians, unlike oil which is controlled by other countries.[36] He and other climate scientists have called for coal phase out completely by the year 2030.[37]

Hansen has said that phasing out coal “is 80% of the solution to the global warming crisis.”[38] As pointed out in Ted Nace's Climate Hope, Hansen’s reasons for emphasizing coal were fourfold:

According to the Union of Concerned Scientists, in an average year, a typical coal plant (500 megawatts) generates the following amounts of air pollutants:[41]

According to a New York Times analysis of EPA data, power plants are the nation’s biggest producer of toxic waste, surpassing industries like plastic, paint manufacturing, and chemical plants.[46]

Solid waste from a typical 500MW coal plant contains 120,000 tons of ash and 193,000 tons of coal sludge from the smokestack scrubber. In the U.S. more than 75 percent of this waste is disposed of in unlined, unmonitored landfills and surface impoundments, and can leach into and contaminate drinking water. Toxic substances in ash and sludge include arsenic, mercury, chromium, and cadmium.[47]

There is no federal regulation for the disposal of fly ash. A 2007 EPA report cited 67 cases in the United States of damage to ground or surface water from coal-combustion products.[48]

The Oak Ridge National Laboratory estimates that in an average year, a typical 1000 MW coal plant releases significant amounts of radioactive material, including 5.2 tons of uranium and 12.8 tons of thorium.[49] 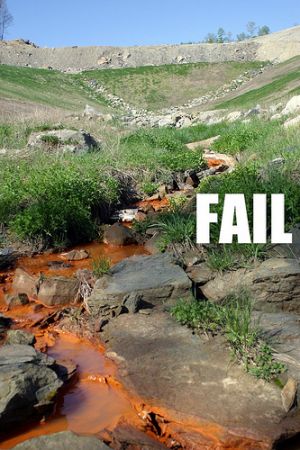 Acid mine drainage (AMD) refers to the outflow of acidic water from coal or metal mines, often abandoned ones where ore- or coal mining activities have exposed rocks containing the sulphur-bearing mineral pyrite. Pyrite reacts with air and water to form sulphuric acid and dissolved iron, and as water washes through mines, this compound forms a dilute acid, which can wash into nearby rivers and streams.[3] AMD discharges elevated concentrations of acidity, iron, manganese, aluminum, and sulfate into receiving streams and rivers, depleting the buffering ability of water by neutralizing carbonate and bicarbonate ions that form carbonic acid. Streams and rivers with low buffer capacity are not able to neutralize the acid load and consequently become acidic. An estimated 2,390 miles of streams in the Allegheny and Monongahela River Basins have been degraded by AMD to the point of not being able to support fish communities.[50]

The use of bagpipes and scrubbers to trap pollutants and toxins from power plant emissions - such as arsenic, aluminum, boron, chromium, manganese, nickel, or chemicals that have been linked to health risks - can leach into groundwater and waterways, contaminating drinking water supplies.[46]

As of January 2010, no federal regulations specifically govern the disposal of power plant discharges into waterways or landfills. Some regulators have used the Clean Water Act to try and limit pollution, but the law does not mandate limits on many dangerous chemicals in power plant waste, like arsenic and lead.[46]

According to a New York Times analysis of EPA records, 21 power plants in 10 states have dumped arsenic into rivers or other waters at concentrations as much as 18 times the federal drinking water standard. State officials sometimes place no limits on water discharges of arsenic, aluminum, boron, chromium, manganese, nickel or other chemicals that have been linked to health risks. Only one in 43 U.S. power plants must limit how much barium is dumped into nearby waterways, despite being commonly found in power plant waste and scrubber wastewater and linked to heart problems and disease. EPA records indicate power plant landfills and other disposal practices have polluted groundwater in more than a dozen states, while a 2007 EPA report suggested that people living near some power plant landfills faced a cancer risk 2,000 times higher than federal health standards.[46]

According to the New York Times, after five states — including New York and New Jersey — sued Allegheny Energy to install scrubbers at one of its coal plants, the company began dumping tens of thousands of gallons of wastewater containing chemicals from the scrubbing process into the Monongahela River. The River provides drinking water to 350,000 people and flows into Pittsburgh.[46]

Power generation has been estimated to be second only to agriculture in being the largest domestic user of water.[31] Water is used by thermoelectric generating facilities (coal, natural gas, and nuclear) to make electricity through converting the water into high-pressure steam to drive turbines. Once through this cycle, the steam is cooled and condensed back into water, with some technologies using water to cool the steam, increasing a plant's water usage. In coal plants, water is also used to clean and process the fuel itself. The U.S. Geological Survey estimates that thermoelectric plants withdrew 195 billion gallons of water per day in 2000, of which 136 billion gallons was fresh water.[31]

When a power plant first opens or shuts down for repair or other causes, fish and other organisms adapted to particular temperature range can be killed by the abrupt rise in water temperature known as 'thermal shock': most aquatic organisms have developed enzyme systems that operate in only narrow ranges of temperature, and can be killed by sudden temperature changes that are beyond the tolerance limits of their metabolic systems.[29]

Coal mining also has a number of adverse effects on the environment:

As of June 2010, no national limits exist on air pollution from coal mines. On June 17, 2010, in a petition presented to Environmental Protection Agency Administrator Lisa Jackson, a coalition of environmental groups called for new controls over coal mine air pollution. The petition states that coal mines should be held to the Clean Air Act standards in force for gravel mines, coal-fired power plants, coal processing plants, and other sources. The petition also calls on Jackson to adopt strict limits on other dangerous air pollutants released from coal mines, including methane, as well as particulate matter, nitrogen oxide gases, and volatile organic compounds — all toxic air pollutants under the Clean Air Act.[53]

The long-distance transport of coal can also result in occasional but significant environmental impacts. In April 2010, a bulk carrier transporting approximately 65,000 tonnes of coal from Gladstone Australia to China ran aground on the Great Barrier Reef. See Shen Neng 1 coal carrier collision with the Great Barrier Reef, Australia.

A 2009 National Academy of Sciences report, Hidden Cost of Energy: Unpriced Consequences of Energy Production and Use, found that the external costs of coal from US coal-fired power plants add up to over $62 billion in environmental damages a year. These include damage done to crop and timber yields, to buildings and materials, and the toll coal takes on human health--including the cost of illness and premature deaths. The study examined 406 coal plants that collectively create about 95% of the nation's coal-burned electricity. As Bloomberg notes, the "aggregate damages associated with sulfur dioxide, nitrogen oxides and particulate matter emitted by the facilities amounted to $156 million on average per plant." These are costs not borne by coal and power companies. The study did not consider any potential damages done by greenhouse gas emissions.[54]

2011 Harvard report: external costs of coal up to $500 billion annually

A Feb. 2011 report, "Mining Coal, Mounting Costs: the Life Cycle Consequences of Coal," led by associate director of the Center for Health and the Global Environment at Harvard Medical School Dr. Paul Epstein, found that accounting for the full costs of coal would double or triple its price. The study, which was released in the Annals of the New York Academy of Sciences, tallied the economic, health and environmental costs associated with each stage in the life cycle of coal – extraction, transportation, processing, and combustion - and estimated those costs, which are borne by the public at large, to be between $175 billion and $500 billion dollars annually.[55]

In terms of human health, the report estimated $74.6 billion a year in public health burdens in Appalachian communities, with a majority of the impact resulting from increased healthcare costs, injury and death. Air pollutants from combustion accounted for $187.5 billion, mercury impacts as much as $29.3 billion, and climate contributions from combustion between $61.7 and $205.8 billion. The study discussed a number of other impacts that are not easily quantified, including effects of heavy metal toxins and carcinogens released into water supplies as part of coal mining and processing; the death and injury of workers mining coal; and the social impacts in mining communities.[55]

"Our comprehensive review finds that the best estimate for the total economically quantifiable costs, based on a conservative weighting of many of the study findings, amount to some $345.3 billion, adding close to 17.8¢/kWh of electricity generated from coal. The low estimate is $175 billion, or over 9¢/kWh, while the true monetizable costs could be as much as the upper bounds of $523.3 billion, adding close to 26.89¢/kWh. These and the more difficult to quantify externalities are borne by the general public." The average residential price of electricity at the time of the report is 12¢/kWh.[55]

Skeptical Science notes that when the coal externalities of the study are included in coal's price, it increases the levalized costs to approximately 28 cents per kWh, which is more than the 2009 U.S. Energy Information Administration cost of hydroelectric, wind (onshore and offshore), geothermal, biomass, nuclear, natural gas, and solar photovoltaics, and is on par with solar thermal, although the costs of solar thermal are falling.[57]

The study noted that its estimates did not include the full cost of coal:[55]

"Still these figures do not represent the full societal and environmental burden of coal. In quantifying the damages, we have omitted the impacts of toxic chemicals and heavy metals on ecological systems and diverse plants and animals; some ill-health endpoints (morbidity) aside from mortality related to air pollutants released through coal combustion that are still not captured; the direct risks and hazards posed by coal sludge, coal slurry, and coal waste impoundments; the full contributions of nitrogen deposition to eutrophication of fresh and coastal sea water; the prolonged impacts of acid rain and acid mine drainage; many of the long-term impacts on the physical and mental health of those living in coal-field regions and nearby MTR sites; some of the health impacts and climate forcing due to increased tropospheric ozone formation; and the full assessment of impacts due to an increasingly unstable climate."[55]

Retrieved from "https://www.gem.wiki/w/index.php?title=Environmental_impacts_of_coal&oldid=351869"
Category:
This page was last edited on 22 July 2022, at 19:45.
Content is available under Creative Commons Attribution-NonCommercial-ShareAlike unless otherwise noted.
Privacy policy
About Global Energy Monitor
Disclaimers