North Dakota's Fort Union Formation holds major amounts of coal in the center and southwestern parts of the state. To date, coal development has concentrated in central North Dakota along the Missouri River. 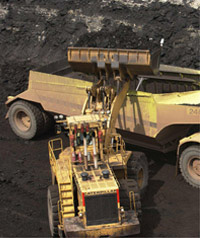 Coal mine in central North Dakota

On November 10, 2009, Montana Governor Brian Schweitzer spoke in Bismark, North Dakota at an energy seminar and said that clean coal technology will help to generate billions in revenue for Montana and North Dakota. Schweitzer also stated that the new coal plants to be built in the states will be "mine to mouth plants", which are different than the older facilities built decades ago throughout the country.[1]

Citizen activism on coal issues in North Dakota dates to 1972, with the formation of the United Plainsmen organization. In 1977, citizens in southwest North Dakota organized the Dakota Resource Council, which continues to be active in advocating on behalf of agriculture and the environment in the state. Current coal issues revolve around three areas:

In 1995, the North Dakota lignite industry succeeded in convincing the North Dakota legislature to pass a law forbidding the Public Service Commission from considering the cost of “externalities” (including a possible tax on carbon dioxide) in power plant permitting decisions.[7]

In 2007 Minnesota announced that it would add a "carbon fee" to electricity imports from North Dakota (similar to a tax or tariff) of between $4 to $32 per ton of carbon dioxide emitted by the state's coal-fired power plants, to begin in 2012. In early January 2010 North Dakota announced it was in the process of taking legal action against Minnesota, arguing that the law would unfairly tax electricity imports from North Dakota's coal-fired power plants. .[8]

On September 30, 2011 a federal judge approved a deal requiring the Environmental Protection Agency to finalize by plans to reduce haze-causing pollution from coal-fired power plants and other sources in four Western states by 2012. The Environmental Defense Fund, WildEarth Guardians and National Parks and Conservation Assocation sued the EPA for failing to address haze-causing emissions, which are required under the Clean Air Act in Montana, Wyoming, Colorado and North Dakota.[9]

It was reported in December 2011 that North Dakota utilities as well as coal interests agreed to pay up to $500,000 of the state's cost in challenging a Minnesota law that restricts imports of coal-generated electricity. However, the state of North Dakota will carry most expense.

North Dakota sued Minnesota in federal court, saying that a law enacted in 2007, which bars utilities from buying power from new plants that would raise carbon dioxide emissions, illegally restricts business between states. They also claim that the law encroaches on Congress' power to regulate interstate power sales and CO2 emissions.[10]

In January 2009, the U.S. Department of Agriculture announced a loan of up to $300 million to Basin Electric Power Cooperative for the development of a demonstration project to capture carbon dioxide emissions at its Antelope Valley Station in Mercer County. Basin Electric is partnering with Powerspan Corp. and Burns & McDonnell to demonstrate CO2 removal from the flue gas of a lignite-based boiler. The project would capture about a million tons of CO2 per year from part of the plant's exhaust stream and send it to oil fields along the pipeline used by the plant.[11]

In July 2009, the project received up to $100 million from the Department of Energy's Clean Coal Power Initiative.[12]

On December 17, 2010, Basin Electric Cooperative and its board of directors decided to postpone the Antelope Valley Station CO2 Capture Project due to the results of a FEED (front end engineering and design) study coupled with the necessary additions that would have to be made to the power plant in order to implement the CCS technologies.[13]

Energy representatives announced in March 2009 that Montana and North Dakota would come together to discuss the potential for future energy development between the two states. Known as the Mon-Dak Energy Alliance, which is made up of oil, gas and mining operators in the two states, have proposed to build a topping plant that would develop up to 22,000 barrels of crude oil per day. In addition, once completed, the facility will include an oil refinery, ethanol plant, bio-diesel, wind farm and a coal-to-liquids conversation center.[14]

On December 8, 2009 fundraising for the project began. Initial costs to build the facility are $180-200 million dollars. Construction of the plant, to be built between Williston, North Dakota and Sidney, Montana, may begin as early as summer 2010.[15]

In March, 2009, Great Northern Power Development withdrew its application for a new coal mine near South Heart, North Dakota. The company said it acted in response to a complaint filed at the North Dakota Public Service Commission by Plains Justice on behalf of Dakota Resource Council and local landowners. The complaint challenged the construction of a new coal preparation plant.[16]

The complaint was filed against GTL Energy for failing to obtain a coal mining permit before starting to build a coal preparation plant near South Heart. State and federal law define coal preparations plants as “surface mining operations” when they are associated with a mine. The proposed plant, which has been under construction since October 2008, would be adjacent to the proposed South Heart coal mine, which has a mining permit pending, and is expected to treat coal from the mine.[16]

A new drying plant in southwestern North Dakota operated by GTL Energy USA Ltd will remove water from over 1 million pounds of coal transported from New Zealand. The plant will remove water from the low-quality but abundant lignite coal and then ship it back to its country of origin. The plant is designed to process 240,000 tons of lignite annually. It is the first commercial coal-drying facility in the world.[17]

The mine would produce approximately 2.4 million tons of coal each year for 30 years. The North Dakota's Public Service Commission is reviewing the company's second application.[19]

On November 30th, the ND Public Service Commission deemed that South Heart Coal LLC's most recent mining permit had 10 deficiencies. The company is expected to address these deficiencies by the start of 2011. [20]

Drinking water contaminated with hexavalent chromium from coal may cause cancer

As a press release about the report read:

Hexavalent chromium first made headlines after Erin Brockovich sued Pacific Gas & Electric because of poisoned drinking water from hexavalent chromium. Now new information indicates that the chemical has readily leaked from coal ash sites across the U.S. This is likely the tip of the iceberg because most coal ash dump sites are not adequately monitored.[27]

As of 2010 there were approximately 4 active coal mines in North Dakota with production of approximately 28,949 short tons per year.[28]

Retrieved from "https://www.gem.wiki/w/index.php?title=North_Dakota_and_coal&oldid=235346"
Categories:
This page was last edited on 30 April 2021, at 11:03.
Content is available under Creative Commons Attribution-NonCommercial-ShareAlike unless otherwise noted.
Privacy policy
About Global Energy Monitor
Disclaimers