Natural gas was first imported into Singapore to replace oil in the power generation sector. By 2013, natural gas had almost entirely replaced oil.[2] As of 2019, Singapore generates about 95% of its electricity from natural gas.[3] As pipeline import contracts are set to expire in the early 2020s, Singapore is shifting towards more LNG imports to meet its gas demand.[4] 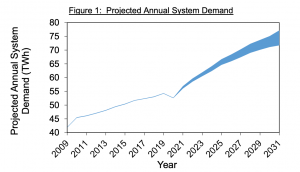 The Energy Market Authority oversees the Singapore gas industry and serves as an independent regulator of the gas and electricity industries.[2] 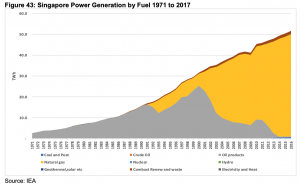 Natural gas is the dominant fuel in the power generation sector. Natural gas use in the industrial sector started in 2003.[2] 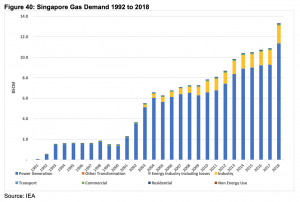 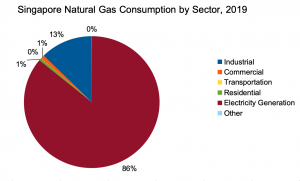 The industrial sector is one of the key areas of gas demand. Power demand growth from data centers are a key driver of natural gas growth.[7] 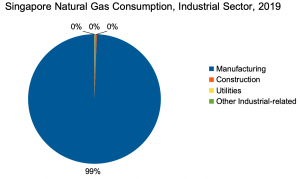 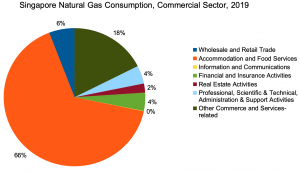 In a 2020 Oxford Institute for Energy Studies report, natural gas demand is forecasted to grow slightly to 14 bcm by 2040. The rise in gas demand effectively reflects a rising demand for electricity since gas demand is primarily in the power sector. LNG is expected to supply nearly all of this demand with some supply via pipeline from Indonesia or Malaysia. Industrial demand for gas is forecasted to be 1.44 bcm in 2030 in a base case scenario.[2]

Singapore has no domestic gas production. LNG imports began in 2013 and previously all natural gas was imported via pipeline from Indonesia and Malaysia.[2]

In November 2019, Indonesia's Minister of Energy and Mineral Resources announced that in order to meet their own domestic gas demand they will stop natural gas supply to Singapore from the Sumatra pipeline once the contract expires in 2023. The Indonesian government has not yet indicated whether the Natuna pipeline contract, set to expire in 2022, will be renewed. [11]

Until 2023, Singapore has about 8.1 bcm of contracted pipeline LNG. After the contracts expire in 2023, more LNG will need to be contracted or bought on the spot market in order to meet demand.[2]

There is no domestic gas production in Singapore. 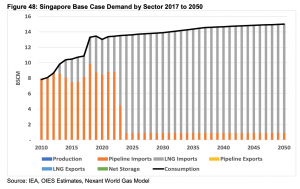 Retrieved from "https://www.gem.wiki/w/index.php?title=Singapore_and_fossil_gas&oldid=222897"
Categories:
This page was last edited on 18 February 2021, at 18:51.
Content is available under Creative Commons Attribution-NonCommercial-ShareAlike unless otherwise noted.
Privacy policy
About Global Energy Monitor
Disclaimers