The use and mining of coal in Victoria is dominated by the power generation sector due to the low-quality brown coal resources located in the state. The Australian Bureau of Agricultural and Resource Economics estimated that in 2010 approximately 68.7 million tonnes of brown coal was produced in the state.[1]

There are also a number of other coal projects which have been mooted, including coal export projects and associated port infrastructure, coal-to-liquids and gas-to fuel projects. There are also several Carbon Capture and Storage research projects currently underway or which have been proposed. In August 2012 the Victorian and federal governments announced the creation of a $90 million Advanced Lignite Demonstration Program "to develop and deploy emerging technology to reduce the greenhouse gas emissions intensity of lignite."[2]

The politics of coal

During the 2010 Victorian election campaign the Ted Baillieu led Liberal Party devoted little attention to addressing climate policy. A search of its Victorian election website at the time yielded no results on the Hazelwood power station, climate change or coal mining. Its most specific commitment on renewable energy was a pledge to impose planning restrictions on the siting of wind farms[3] and the promise of a minor grant to investigate the generation of electricity from green waste in the Ballarat area.[4]

Ahead of the election, Baillieu was asked if he supported the Labor government's target of reducing greenhouse gases by 20 per cent. He said "Well we'd like to think that it was achievable. I'm not sure that it will be achieved. It's a target."[5] He was also cited as telling MTR radio that that the Hazelwood powerstation would only be replaced is the federal government put a price on carbon.[6]

Following the election Baillieu stated that his government would abandon Labor's plan to shutter one-quarter of the Hazelwood power station if International Power could agree on a compensation package.[7]

In the run up to the 2010 election the then Brumby Labor government sought to blunt the rising voter support for the Greens by proposing the shut down of part of the Hazelwood power station and released Taking Action for Victoria's Future, a Climate Change White Paper. In its White Paper, Brumby's government committed to cut greenhouse gas emissions by 20% by 2020. "The most cost-effective way to clean up our environment and achieve this reduction in greenhouse gas over the next four years is to close two of the eight units at Hazelwood Power Station," Premier Brumby stated.[8] However, the government's attempts to burnish its green credentials were undermined by the ongoing assessment of the proposal by Dual Gas Pty Ltd, a special purpose subsidiary of HRL, to build the 600 megawatt Dual Gas power station. Environmental groups objected to the proposal. In late July 2012 the Federal Minister for Resources and Energy, Martin Ferguson, announced that, after four extensions granted to HRL to comply with conditions of a $100 million funding agreement, the government had decided to withdraw funding as the company "did not meet the required conditions set out in the funding deed."[9] 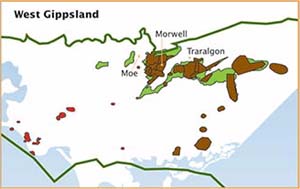 With most of the brown coal deposits are within 10 to 20 metres of the surface and up to 100 metres thick, the current mines are large-scale open-cut operations. Victorian brown coal - while occurring in large volumes -- has moisture content in the range of 48-70%, which has precluded it from being exported. However, the Victorian government and various private companies agencies have invested considerable effort in researching technologies which would enable the commercial export of dried coal products or the conversion of the state's unallocated coal into fuel or other products.[10]

According to the Victorian government, the stationery energy sector -- which includes power stations and fuels burned in manufacturing, construction, commercial sectors and domestic heating -- contributed just over two-thirds of the states net greenhouse gas emissions in 2006. 79% of the stationery energy sector emissions in Victoria that year were from power stations.[14]

In October 2001 the Victorian Government held a "brown coal tender" to allocate 15 billion tonnes of coal from four sites in the Latrobe Valley for so-called "clean coal" projects. These projects were supposed to demonstrate more sustainable ways to utilise brown coal in exchange for receiving billions of tonnes of coal.[15] Three companies received coal allocations from the Victorian government in 2002 -- Australian Power and Energy Limited (APEL) and its later incarnation Monash Energy, HRL Developments Pty Ltd and Loy Yang Power.[16] However, none of the projects have since been developed. In some cases the developers have sold their projects to others, making million of dollars out of coal allocations granted by the state government. Following the decision of the federal government to withdraw support for HRL's Dual Gas power station proposal, the company have made no public comment. The Victorian government have also cancelled the 2002 coal allocation to Monash Energy.[17] (See 2002 Victorian coal allocation for further details.)

In 2006 the Victorian Government committed to a 60% reduction in greenhouse gas emissions by 2050 compared to 2000 levels.[14] However, it has also signalled that it intends to rely heavily on “clean coal” and carbon capture and storage (CCS) (geo-sequestration) as the solution to reduce carbon emissions. According to the Victorian Department of Primary Industries:

”Clean coal technologies, in particular carbon capture and storage, are seen by the Government as the means to reduce greenhouse gas emissions and Government has actively funded there (sic) development through the Energy Technology Innovation Strategy”.[18]

However, there are substantial doubts about CCS as it is not yet a commercially viable technology and may not be until 2030 or even later in the century.[19] Confidential Victorian cabinet documents acknowledge that the ‘clean coal’ strategy may not work.[20]

Since 2002 State Government assistance to the coal industry’s ‘clean coal’ projects has amounted to more than $244 million.[21] plus a coal allocation of between 15 and 25 billion tonne.[12] The money alone is near seven times the $36.1 million spent by the Australian Coal Association's Coal21 fund, the industries main vehicle for funding clean coal technologies.[22]

Despite the failure of the 2002 coal allocation to translate into any real projects, in late 2009 the Victorian government was once again considering offering billions more tonnes of coal to industry through a tender process in 2010. It is however anticipated that this tender process with be preceded by an allocation to the company Exergen to mine, dry and export 12 million tonnes of brown coal a year to India[23], for forty years.[24] At least another 2 companies are seeking access to coal , one in the hands of Allan Blood.[23], ex chairman of APEL, who profited significantly from the 2002 allocation.

The consideration of a further coal allocation appears to be in contradiction with advice provided to the Brumby government by a consultant, which stated "a further allocation of coal should only be considered if there is evidence of credible, well resourced new investors who face difficulty in agreeing reasonable terms to access the coal resource that has already been allocated."[12]

The then Brumby government aimed to "vigorously pursue" the wider exploitation of coal, opening it up to export for overseas power stations. The Government’s newly established organization, Clean Coal Victoria, is working on "identifying future coal resources" and "planning for long-term brown coal use".[25] Since the 2002 coal allocation, with its conditional emissions targets, the Government has indicated in cabinet documents that it intends to not impose emissions limits on individual coal-fired plants.[25][23]

The coal-fired power stations in the Latrobe Valley are currently major water consumers which is likely to increase if CCS projects did proceed. Conservative estimates project a reduction in the average annual volume of water available through Melbourne’s water system of 8% in 2020 rising to 20% by 2050.[26] Currently, the existing five power stations in Latrobe Valley use 125 billion litres of water, equivalent to a third of Melbourne’s water annually.[27] The application of CCS technology to the existing plants, or the addition of any new CCS coal plants will greatly increase the volume of water used - because of the energy penalty, CCS uses up to one third more water than conventional coal-fired power. It is highly likely that this water consumption will be unsustainable. (See The Victorian coal-fired electricity industry and water).

In December 2011 it was reported that Exergen was lobbying the state government for a billion tonne allocation of brown coal. Exergen's chief executive Jack Hamilton told the Latrobe Valley Express that the company, with support from Tata Power, could proceed with a demonstration plant but only if it gained secure access to a coal resource. "When we talk coal access, we’re talking commercial quantities that would support a project over a 30 year life span, through plant expansions and upgrades ... we need a billion tonnes of coal,” Mr Hamilton said.[30]

Environment Victoria’s Mark Wakeham said Exergen's bid should be rejected. "Exergen has been spruiking this project for years; there’s been nothing to stop them from doing an agreement with someone commercial to get their project off the ground," Mr Wakeman said. "If they’ve got this product which they think is fantastic, then why aren’t they commercially developing it privately already? This would suggest it is economically unviable." Hamilton acknowledged that Loy Yang Power would have sufficient reserves but that negotiations on that front had stalled. "We’ve been in discussions on and off with Loy Yang, but haven’t been able to find a way to move forward; that doesn’t close the door as things progress,” he said.[30] For further details see Proposed new brown coal allocations by the Victorian government.

The brown coal fired power stations in Victoria are:

The operating brown coal mines in Victoria are:

Proposed Carbon Capture and Storage (CCS) projects in Victoria are:

In addition the Victorian government is funding the Victorian Geological Carbon Storage project to research the potential carbon dioxide storage capacity of the Gippsland Basin. The four-year, $5.2 million project is being undertaken by GeoScience Victoria, a part of the Victorian Department of Primary Industries. The project is scheduled to be completed in June 2012.[56]

The high water content of brown coal limits its use to domestic power stations. However, there are a number of proposals for the drying and other treatment of brown coal to expand its domestic market and open the door to potential export markets. These include:

Retrieved from "https://www.gem.wiki/w/index.php?title=Victoria_and_coal&oldid=238676"
Categories:
This page was last edited on 30 April 2021, at 11:07.
Content is available under Creative Commons Attribution-NonCommercial-ShareAlike unless otherwise noted.
Privacy policy
About Global Energy Monitor
Disclaimers