Since 2014, Costa Rica has been generating more than 98% of its electricity from renewable sources, but has yet to turn fully to renewables in other sectors such as transportation.[1] In 2020, renewables accounted for more than 99% of the country's electrical generation, with hydro, wind, and geothermal being the three key sources.[1][2]

Costa Rica was the first country in Latin America and the Caribbean to adopt a coordinated plan to achieve a zero-emission economy by 2050.[4] As of 2019 more than half of greenhouse gas emissions came from the transportation sector.[5] Costa Rica is creating policy based on the National Decarbonization Plan 2018-2050.[6]

MINAE (Ministerio de Ambiente y Energía) is the national body responsible for the conservation and sustainable development of energy and natural resources in Costa Rica.[7]

Costa Rica's numerous laws regulating the environment are almost all enforced by MINAE.[9]

The green energy sector has created approximately 3,000 jobs in Costa Rica in areas such as biofuels, solar energy, and bus reconversion.[12]

As of 2020 Costa Rica's installed electrical capacity was 3537 MW, with renewables accounting for nearly 87% and fossil fuels making up the remainder.[2] ICE owned nearly 70% of the market installed capacity as of 2019.[6] 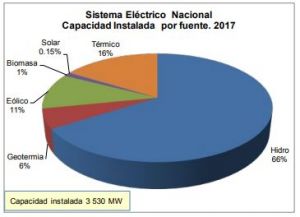 Costa Rican access to electricity is universal and the country is able to meet demand through renewable resources.[14]

During 2018, 10.16 TWh of electricity was consumed in Costa Rica.[15] Costa Rica produces enough electricity to cover 110% of its annual consumption needs.[16]

Costa Rica does not use coal for electricity production.[18] In 2016, Costa Rica consumed 110 short tons of coal- approximately 22 cubic feet of coal per capita - ranking 127th in the world.[17]

Costa Rica imports all of the coal it uses, much of it from the United States.[19]

Oil and gas exploration policies have been under threat of ban since 2002, with activists pushing for the ban to continue until 2050.[20] In December 2020, Costa Rica joined Denmark in taking the first steps to establishing an official end date on fossil fuel production.[21] Groups such as ADELA (Acción de Lucha Anti-Petrola) actively oppose offshore oil exploration.

Due to the small population and economy which is not focused on manufacturing, Costa Rica does not burn much oil or gas; the majority that is consumed is by the transportation sector.[22] Fuel theft from the Recope Pipeline has been a concern for Costa Rican officials, with 279 oil theft incidents in 2019.[23]

As Costa Rica continues to diminish the use of oil and natural gas, there are no new projects in the foreseeable future.[21]

The Recope pipeline moves oil throughout Costa Rica, from Moín on the Caribbean coast to Barranca on the Pacific coast.[24]

The 2018-2034 energy plan does not include additional hydropower projects although the existing hydropower will continue to be an important part of the country's energy matrix.[3][25]

Open pit mining is prohibited in Costa Rica due to the negative environmental, visual, human, and cultural impacts.[30] The Costa Rican Air Surveillance Service helps to monitor for illegal mining operations in the country.[31]

Retrieved from "https://www.gem.wiki/w/index.php?title=Energy_profile:_Costa_Rica&oldid=280095"
Categories:
This page was last edited on 31 December 2021, at 13:05.
Content is available under Creative Commons Attribution-NonCommercial-ShareAlike unless otherwise noted.
Privacy policy
About Global Energy Monitor
Disclaimers