Oil and natural gas continue to supply most of Jamaica's energy, supplemented by significantly smaller contributions from renewables.[1][2] As of 2020, nearly 89% of electricity was still generated by fossil fuels.[1][3]

In response to the Paris Agreement, Jamaica pledged that renewables would comprise 20% of the national energy mix by 2030.[4] In 2018, Prime Minister Andrew Holness increased the country's 2030 target for renewable electricity generation from 30% to 50%.[5] Jamaica is currently following the National Energy Policy 2009-2030.

Jamaica's December 2020 update to its NDC (Nationally Determined Contribution) aims to reduce greenhouse gas emissions by more than 25% relative to business as usual levels by 2030, with the majority of reductions coming from the energy sector.[6][7] This represents a significant upwards revision from the 7.8% to 10% GHG reduction called for in Jamaica's original NDC.[4]

MSET (Ministry of Science, Energy, and Technology) is the government institution responsible for energy.

NEPA (National Environment and Planning Agency) is responsible for permitting and tracking all environmental impact assessments.[8]

The PCJ (Petroleum Corporation of Jamaica) is the state-owned company responsible for exploration, development, and management of Jamaica's oil and petroleum resources.

As of 2020, 16.23% of Jamaicans worked in the industrial sector, which includes mining, quarrying, manufacturing, construction, electricity, gas, and water.[9] MSET aims to train young Jamaicans to work in the energy sector, particularly with renewables.[10] 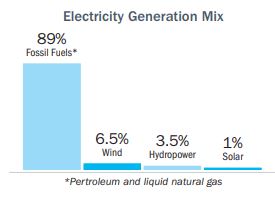 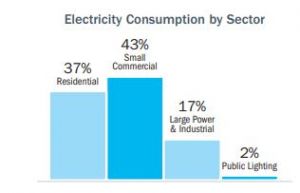 Jamaica has no coal reserves and does not produce coal. Historically it has imported coal,[12] but other fuels such as natural gas are gaining ground, and proposed coal plants, such as Jamalco Power Station, have been repurposed due to concerns over coal usage.[13]

Jamaica does not produce crude oil.[14] The state-owned Petrojam refinery produced 24,250 barrels per day of refined petroleum products in 2017.[14] Jamaica was not producing natural gas as of 2017.[14]

Offshore oil explorations have opened up a new market in Jamaica as evaluations have revealed the potential for more than 2.4 billion barrels of oil.[17] The United Kingdom's United Oil & Gas held a license for 11 prospects and leads for offshore gas in Jamaica's territorial waters as of 2020.[17] The exploration license states that United Oil & Gas must make a decision to drill by January 2022 or lose their license.[18] 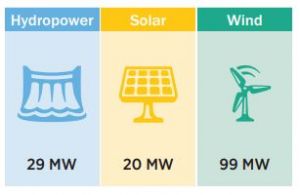 JPS is diversifying its electrical generation into solar and wind projects.[19] MSET is focusing on energy diversification and has authorized individual residences and businesses to generate electricity for their own use.[20] Government officials who support renewable energy cite its potential to protect Jamaica from external economic shocks.[20]

Jamaica has small deposits of iron ore, but the mining industry is much more focused on other minerals.[22]

Environmental activists raised concerns in 2020 about the adequacy of the Jamaican government's climate plan, notably with how it does not address forest protection and deforestation.[7] Younger Jamaicans tend to be involved in environmental activism, particularly those who understand the impacts of climate change on agriculture and rural youth.[23] Activists are pushing for large solar farms, electric vehicles, and mangrove restoration.[7] The Jamaican government continues to approve controversial mining permits despite rejection by state conservation authorities.[7][24]

Retrieved from "https://www.gem.wiki/w/index.php?title=Energy_profile:_Jamaica&oldid=280847"
Category:
This page was last edited on 2 January 2022, at 22:34.
Content is available under Creative Commons Attribution-NonCommercial-ShareAlike unless otherwise noted.
Privacy policy
About Global Energy Monitor
Disclaimers