The Uruguayan government states they are focused on reducing emissions from the energy sector so as not to disrupt the agricultural systems which make up 76% of their emissions and 70% of national exports.[4] As of 2017, Uruguay had reduced its greenhouse gas emissions by 88% compared to the 2009-2013 period average.[5] Uruguay aims to be carbon neutral by 2030.[6] 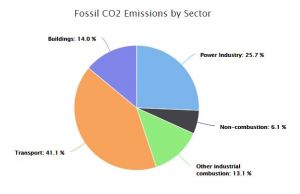 DINAMA (Dirección Nacional de Medio Ambiente) issues permits for any project that would be potentially disruptive to the environment.

URSEA (Unidad Reguladora de Servicios de Energía y Agua) is responsible for the regulation of the electrical and water sector.

As of November 2018, the renewable energy sector employed more than 11,000 workers in Uruguay.[7]

As of 2016, Uruguay had 4.808 million kW of installed electrical generating capacity.[2]

Uruguay does not produce, consume, or import coal.[9]

As of May 2021, there are no new projects proposed for oil and gas in Uruguay.

Gas is transported into Uruguay from Argentina via the Gasoducto Cruz del Sur.

Uruguay's rates of electricity generation from renewables (98%) and wind power (26%) are among the highest in the world.[10] Since the signing of the Kyoto Protocol in 1997, Uruguay has grown aggregate renewable energy by 93%.[11] In 2006, Uruguay became one of the first countries in Latin America to hold national energy auctions focused on the commissioning of renewable energy projects.[10] Following a period of stagnation around 2007, the renewable energy sector began to rise in prevalence again around 2010 with an emphasis on wind and hydroelectricity.[6] As Uruguay has embraced renewable energy, the country has moved away from a dependency on energy imports from neighboring Argentina. As of 2020, Uruguay ranked fourth globally in use of wind and solar energy.[5] The diversification of the renewable energy sector has been very beneficial for Uruguay to lower costs of electricity and to reduce greenhouse gas emissions.[5]

Uruguay primarily imports iron and steel from Brazil.[12] Following estimates by the British mining company, Zamin Ferrous, of 2.5 billion tons of iron reserves in Uruguay the country has undergone legal battles and environmental protests against the negative effects of open pit mining.[13] As of 2020, the Uruguayan court system continues to hear cases by iron ore mining investors seeking to tap into Uruguay's reserves.[14]

The diversification of Uruguay's renewable energy sector has allowed the country to first use wind and solar energy to preserve water in the dams to better mitigate droughts.[5] Protests against iron ore mining are likely to be an important environmental and social issue for Uruguay throughout the 2020s.[15]

Retrieved from "https://www.gem.wiki/w/index.php?title=Energy_profile:_Uruguay&oldid=252327"
Category:
This page was last edited on 22 June 2021, at 22:21.
Content is available under Creative Commons Attribution-NonCommercial-ShareAlike unless otherwise noted.
Privacy policy
About Global Energy Monitor
Disclaimers