As of 2020, Brazil was the world's sixth largest emitter of greenhouse gases.[5] CO2 emissions from deforestation of the Amazon rose nearly 10% in 2019 under the environmental policies of Brazilian president Jair Bolsonaro[6], and by 2020 more than 25,000 kilometers of Brazilian rainforest had been destroyed during the first two years of Bolsonaro's tenure.[7] Brazil's NDC (Nationally Determined Contribution) targets for 2025 and 2030 call for reductions in GHG emissions of 37% and 43%, respectively, from 2005 levels; these targets have remained unchanged since 2015.[8][9] Brazil's ongoing commitment to coal power (reaffirmed by the government in August 2021)[10][11] and increasing dependence on petroleum derivatives in the transport sector pose challenges to meeting these goals.[4]

Majority state-owned Petrobras is Latin America's largest and most profitable oil producer[13][14], and a leader in deep water exploration and production.[15] Petrobras is involved in oil and gas exploration, production, and distribution, and operates refineries, power plants, and LNG terminals throughout the country. 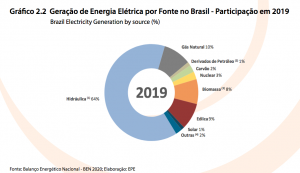 Brazil has Latin America's largest proved reserves of coal, estimated at 6.6 billion tonnes in 2019. However, it is only the region's third largest producer, lagging far behind Colombia and Mexico.[20] Coal development in Brazil is heavily concentrated in southern Brazil, which holds 99.97% of national coal reserves.[21] The southern state of Rio Grande do Sul is home to all of Brazil's significant coal mines, 88% of national coal reserves, and the majority of its operating and proposed coal-fired power plants.[22]

Brazil's proposed Guaíba Mine project, which has been seeking environmental approval since 2014, would be the largest open pit coal operation in Latin America, with the potential to produce more than 6 million tonnes per year. However, the mine has encountered ongoing legal challenges and fierce opposition from concerned citizens and environmental groups.[22][25]

While the Brazilian development bank BNDES has discontinued funding for coal projects in favor of renewables and gas-fired projects[11], Brazil's federal government continues to promote coal, calling for a R$ 20 billion investment in the country's coal sector between 2021 and 2031.[4][10][21]

In 2020, Brazil was Latin America's leading producer of petroleum and other liquids and ranked 7th globally, with domestic production totaling 3.79 million barrels per day.[23] In 2019, Brazil ranked eighth worldwide in crude oil production, ninth in oil products production, and 22nd in natural gas production.[16] Recent development has focused on the the pre-salt layer off Brazil's southeastern coast, which accounts for more than half of the country's oil and natural gas reserves.[26]

Brazil was Latin America's largest consumer of petroleum and other liquids in 2018, consuming more than 3 million barrels per day.[27] In 2019, Brazilians consumed 35.8 billion cubic meters of natural gas, ranking third in Latin America behind Mexico and Argentina.[28]

Brazil is Latin America's third largest crude oil exporter (after Venezuela and Mexico), ranking 15th globally in 2018 with shipments totaling 832,000 barrels per day.[23] Brazil supplements its own natural gas production with a smaller volume of international LNG shipments from Asia and imports via pipeline from Bolivia. Pipeilne imports have decreased following the expiration of Brazil's 20-year contract to purchase gas from Bolivia at the end of 2019, and demand for imported gas has waned as Brazil develops its own substantial gas fields in the pre-salt layer.[29][30][31]

Brazil imports natural gas from Bolivia via the 3150 km Gasbol gas pipeline and the 645 km Cuiabá pipeline. The country's other major gas pipeline system, operated by TAG, runs up the east coast from Rio de Janeiro state to Ceará state. The centerpiece of this network is TAG's 1387 km Gasene Gas Pipeline. Brazil has three long-established LNG import terminals in Guanabara Bay, Bahia, and Pecém and a newer one that opened in 2020 in the northeastern state of Sergipe.

Wind energy is steadily growing in importance and has become Brazil's second leading source of renewable energy[36], with the largest wind farms concentrated in the northeastern Brazilian states of Rio Grande do Norte, Bahia, Ceará and Piauí.[37][38][39] According to recent reports, the Northeast is home to 82% of Brazil's wind farms[36], representing 96% of the nation's installed wind capacity and 85% of national wind generation.[40] As of 2021, Brazil ranked 7th globally in wind power generation, with roughly 19 GW of installed capacity.[41] Wind is the most rapidly growing segment of Brazil's electricity market, accounting for 83% of new generating capacity added during the first six months of 2021.[42] Interest in offshore wind is rising dramatically; as of June 2021, companies were seeking licenses for 42 GW of new offshore wind projects.[43]

Solar energy is also on the rise, spearheaded by states in southern and southeastern Brazil[44]; in 2020, installed photovoltaic capacity grew to 5.6 GW, surpassing the combined capacity of coal and nuclear power.[45] In 2005, Brazil became one of the first countries in Latin America to hold national energy auctions focused on the commissioning of renewable energy projects.[46]

Brazil's Amazon basin is especially vulnerable to the impacts of extractive industries and large-scale energy infrastructure, due to the region's unparalleled biodiversity and the deep interconnections between indigenous communities and the natural environment. Among Brazil's most environmentally destructive developments is the 11.2 GW Belo Monte hydroelectric plant, the fourth largest hydro project on earth. Construction of the Belo Monte dam displaced over 20,000 people and caused irreversible damage to endemic species, flooding more than 260 square miles along the Xingu River in 2015. Brazil's plans for additional hydro mega-projects in the Amazon were scaled back in 2018, but other threats, most notably deforestation, have subsequently intensified.[6][48][49]

Retrieved from "https://www.gem.wiki/w/index.php?title=Energy_profile:_Brazil&oldid=280074"
Category:
This page was last edited on 30 December 2021, at 19:17.
Content is available under Creative Commons Attribution-NonCommercial-ShareAlike unless otherwise noted.
Privacy policy
About Global Energy Monitor
Disclaimers