As of 2020, Barbados derived 93% of its electricity from fossil fuels, with the remaining 7% generated by solar energy.[1] Barbados aims to become the first 100% renewable energy and carbon neutral island nation by 2030 as the country moves away from a petroleum based economy via the Barbados National Energy Policy (BNEP) 2019-2030.[2]

According to the Barbados government website, "The Natural Resources Department within the Ministry of Energy, Small Business and Entrepreneurship promotes and provides policy, legislative and regulatory oversight with respect to the exploration, development and production of Barbados’ onshore and offshore hydrocarbon resources."[4] Established in 1978, the Ministry of Energy is presently responsible for oil and gas, renewable energy, and energy conservation as well as monitoring the Barbados National Oil Company, Barbados National Terminal Company, and the National Petroleum Corporation.[5]

MEWR (Ministry of Energy and Water Resources) is responsible for energy generation in Barbados.

The Ministry of Environment and National Beautification oversees environmental protection through permitting.

The Project Monitoring & Coordination Team ensures energy projects align with the BNEP 2019-2030.[2] The Ministry of Environment and National Beautification regulates the energy industry by ensuring environmental protections. The Barbados Fair Trading Commission is another regulatory entity. Mining regulation is overseen by the Geology and Mining Department.

The BNOCL (Barbados National Oil Company Limited) is responsible for the exploration and production of hydrocarbons in Barbados.

As of 2020, 18.93% of Barbadians worked in the industry sector which is comprised of mining, quarrying, manufacturing, construction, electricity, gas, and water.[6]

Barbados does not produce, consume, import or export coal.

Barbados has no onshore reserves of oil or gas.[9] As of 2018, Barbados was producing 1,000 barrels per day of crude oil from offshore sites[8] most of which was shipped to Petrotrin in Trinidad and Tobago.[10] Barbados was producing 14.16 million cu m of natural gas in 2017 and had 141.6 million cu m of proven natural gas reserves as of January 2018.[8]

Barbados imports no crude oil. Barbados imports 10,630 barrels per day of refined petroleum products as of 2016.[8] As of 2021, the NPC website acknowledged the growing demand for natural gas which has prompted research into the importation of natural gas into Barbados.[11]

In 2020, MEWR issued offshore exploration licenses to BHP Petroleum.[12] In March 2021, the Ministry of Energy announced that Barbados was restarting fossil fuel exploration after a pause due to COVID-19.[13]

The Inter-Caribbean Natural Gas Pipeline was a proposed natural gas pipeline passing through Trinidad and Tobago, Barbados, Martinique, and Guadeloupe that was cancelled.

The BNEP 2019-2030 calls for Barbados to become the first 100% renewable energy and carbon neutral island nation by 2030.[3] Ocean energy projects, including fixed and floating wind farms, are a key area for renewable energy expansion.[14] By 2023, the BNEP aims to have between a 52% increase in renewable energy.[3] The BNEP anticipates solar PV, solar thermal, wind, biofuels, and biogas will all make up the renewable energy mix by 2030.[3]

Speech: Mia Mottley, Prime Minister of Barbados at the Opening of the #COP26 World Leaders Summit

As of December 2021, Prime Minister Mottley projected every household on the island would have a solar paneled roof and electric car.[15] 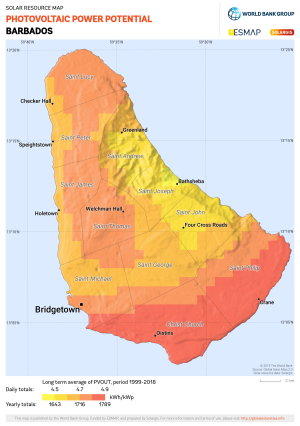 There is no iron and steel industry in Barbados.[16]

The island of Barbados is greatly affected by many aspects of climate change including sea level rise and increased power of storms. Accordingly, the move towards renewable energy for the island is an attempt to mitigate some of the effects of climate change which the country is experiencing.[17] Tourism accounts for 40% of the GDP and adverse effects brought to the island by climate change severely damage the livelihoods of many. New off shore oil drilling operations are a threat to marine life and tourism.[18]

Retrieved from "https://www.gem.wiki/w/index.php?title=Energy_profile:_Barbados&oldid=294624"
Category:
This page was last edited on 2 May 2022, at 15:28.
Content is available under Creative Commons Attribution-NonCommercial-ShareAlike unless otherwise noted.
Privacy policy
About Global Energy Monitor
Disclaimers