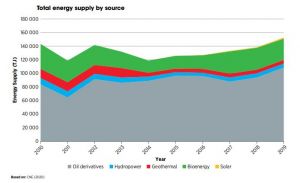 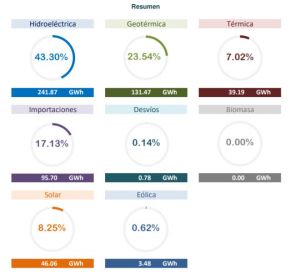 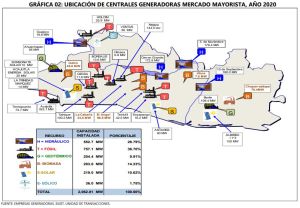 Between 2015 and 2017, El Salvador's per capita greenhouse gas emissions from fossil fuels increased from 1.17 to 1.23 metric tons.[3] El Salvador is one of the most vulnerable countries in the world to the effects of climate change, which has influenced its contributions to the Paris Climate Agreement.[4][5]

El Salvador submitted an updated Nationally Determined Contributions document in January 2022 in which they set a 640 Kt CO2eq yearly reduction from fossil fuel burning activities by 2030 (compared to the 2019 business as usual scenario).[6]

El Salvador does not have a national oil company.

In 2020, 22.06% of total employment in El Salvador was in the industry sector which includes mining, quarrying, electricity, gas, water, and construction.[7] 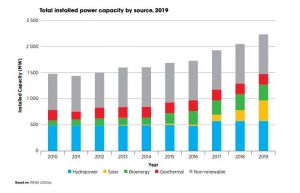 Demand for electricity in El Salvador has grown in conjunction with the introduction of cryptocurrency as legal tender; notably geothermal power close to volcanoes will power Bitcoin mining.[8] 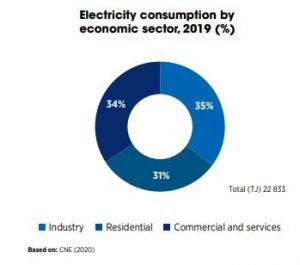 El Salvador does not produce or consume coal; accordingly it neither imports nor exports coal.[1][9]

El Salvador does not produce any oil or natural gas.[1]

In 2019, El Salvador imported US$1.14 billion of refined petroleum and US$218 million of petroleum gas, primarily from the United States.[11] 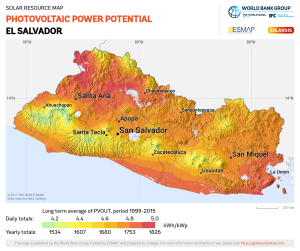 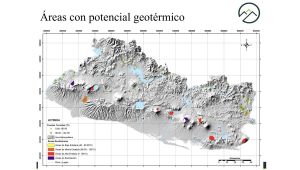 Bioenergy (19.6%), hydropower (3.5%), geothermal (3.4%), and solar (1.1%) were El Salvador's top renewable sources as of 2019.[1] Electrical generation from sugar cane residue accounts for a large share of the bioenergy component.[13] Since adopting the Paris agreement, El Salvador has prioritized clean energy sources and system-wide improvements in energy efficiency.[1] Bioenergy, geothermal, hydropower, solar, wind, and ocean energy are the key renewable sectors receiving funding.[1] As of December 2020, El Salvador had adopted an action plan to increase the presence of renewable energy in the country.[14]

In 2022, El Salvador began a partnership with IRENA to move forward with renewable energy plans as part of national decarbonization efforts.[15] Geothermal development is a key aspect of El Salvador's plan.[16]

In November 2021, President Nayib Bukele announced the official plans for a Bitcoin City in El Salvador. The city plan renderings are for a circular (a nod to the shape of a coin) city next to the Conchagua volcano in the department of La Unión. Th geothermal plant in development will power the civil energy needs of the city in addition to providing the power for bitcoin mining.[17] The announcement was made by the President in English leading critics of the geothermally powered Bitcoin City to speculate on whether the city is for foreigners and not for Salvadorans.

Retrieved from "https://www.gem.wiki/w/index.php?title=Energy_profile:_El_Salvador&oldid=358654"
Category:
This page was last edited on 21 September 2022, at 07:54.
Content is available under Creative Commons Attribution-NonCommercial-ShareAlike unless otherwise noted.
Privacy policy
About Global Energy Monitor
Disclaimers