As of 2020, 59.6% of Suriname's electricity was generated by hydropower, 40% from fossil fuels and 0.4% from solar energy.[1] Suriname aims to keep its share of electricity from renewable sources above 35% by 2030, according to the country's updated NDC (Nationally Determined Contribution) plan.[2]

Suriname pledged to not exceed 1.5 degrees Celsius above pre-industrial levels while also following a "cost-effective pathway to decarbonization of sustainable economic development."[3] Suriname plans to meet these goals by focusing on forests, electricity, agriculture, and transportation.[3]

The Ministry of Natural Resources is responsible for the government's energy programs and initiatives.

Suriname's permitting process is detailed in a report by the Inter-American Development Bank, ESIA (Environmental and Social Impact Assessment for Energy Infrastructure Projects).

Staatsolie is the national oil company of Suriname.

EBS and Staatsolie are responsible for their own regulatory processes.[5]

In 2020, 23.49% of those employed in Suriname worked in the industry sector, which includes mining, quarrying, manufacturing, construction, electricity, gas, and water.[6] 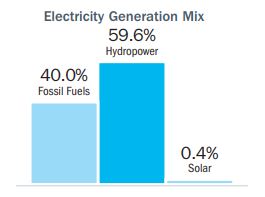 Suriname does not produce, consume, import, or export coal.[7]

Suriname consumed 13,000 barrels per day of refined petroleum products during 2016. As of 2017, the country consumed no natural gas.[8]

Suriname was importing neither crude oil nor associated petroleum products as of 2021.[9]

Throughout 2020, five offshore oil and gas discoveries were made off the coast of Suriname, one of which is expected to start producing oil by 2025.[10] It is likely that Suriname will use oil and gas investment to jump-start its troubled economy.[11]

As of September 2020, hydro power (180 MW), solar (7 MW), and biomass (2 MW) were the main forms of renewable energy.[1] The Development of Renewable Energy, Energy Efficiency, and Electrification of Suriname program is being followed to promote renewable energy integration. Solar power will likely become an essential energy source as prices drop and Suriname attempts to move away from fossil fuels.[14]

Suriname has suffered from extensive soil erosion, heavy rainfall, flooding, higher temperatures, high winds, and more intense storms as a result of climate change.[3] Other environmental challenges facing Suriname include deforestation, water pollution from mining, and salinization of potable water.[15] In 2020, Suriname pledged to expand its protected forests and wetlands to cover 17% of national territory by 2030, up from the current 14%.[2][16]

Retrieved from "https://www.gem.wiki/w/index.php?title=Energy_profile:_Suriname&oldid=258762"
Categories:
This page was last edited on 28 July 2021, at 19:03.
Content is available under Creative Commons Attribution-NonCommercial-ShareAlike unless otherwise noted.
Privacy policy
About Global Energy Monitor
Disclaimers