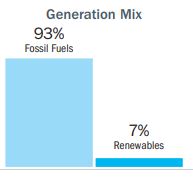 Haiti relies on a mix of imported oil and domestic biofuels such as wood and sugar cane for its total energy supply.[1][2] As of 2020, more than 90% of electrical generation in Haiti was derived from fossil fuels and less than 10% from renewables.[1][3] Haiti's nationally determined contribution under the Paris Agreement aims for 47% renewable energy generation by 2030, with individual targets for hydro (24.5%), wind (9.4%), solar (7.5%), and biomass (5.6%).[4] Political turmoil represents a barrier on the path to energy self sufficiency, particularly in the clean energy sector.[5]

Haiti has set an unconditional goal of reducing greenhouse gas emissions 5% by 2030 from 2015 levels, with a conditional target of 26% contingent on international support. The country currently accounts for less than 0.03% of global carbon emissions.[4][6]

The MTPTC (Ministry of Public Works, Transport, Communication, and Energies) is responsible for energy projects in Haiti. Additionally, the BME (Bureau of Mines and Energy) is the body operating under MTPTC's supervision to research and exploit mineral and energy resources of Haiti.

The BME is responsible for permitting and maintains specific information on how to apply for permits on their website.[7]

ANADIPP (National Association of Petroleum Distributors) represents the gas stations in Haiti and advocates for affordable, consistent access to fuel.[9]

As of 2020, 6.642% of Haitians worked in the industrial sector which includes mining, quarrying, manufacturing, construction, electricity, gas, and water.[10]

Less than half of Haiti's population has access to electricity; service is concentrated in urban areas and reaches a much smaller minority of rural households.[1][3][11]

As of 2020, Haiti's installed electrical capacity was 471 MW, derived from a mix of fossil fuels (82.90%), hydro power (16.54%) and solar energy (0.56%).[1] Electricite d'Haiti publicized in 2020 that they were only able to supply the Port-au-Prince metropolitan area with electricity 6-10 hours a day due to grid instability and lack of available electricity; only 60 percent of total installed capacity was deemed reliable in 2020.[12]

Haiti produced 1059 GWh of electricity in 2020; 91.59% of the total was generated by fossil fuels, supplemented by smaller contributions from hydro (8.34%) and solar energy.[1] Haiti experienced a 60% loss during transmission and distribution due to faulty infrastructure.[3] Blackouts are a frequent occurrence due to the instability of Haiti's electrical grid.[13]

During 2016, Haiti consumed 406.2 million kWh of electricity.[11] As of 2020, 43% of electricity in Haiti was consumed by the industrial sector, 32% by residential, and the remaining 25% by commercial and public services.[3] Many in Haiti are connected to the electricity grid illegally which complicated billings and collections to cover costs associated with generation, transmission, and distribution of electricity.[14]

While Haiti does not produce, consume, or import coal,[15] the country uses extensive amounts of charcoal (often referred to as coal) for household activities.[16]

Haiti does not produce, export, import, or have proven reserves of crude oil or natural gas, nor does it produce refined petroleum products.[11] During 2016, Haiti imported 20,030 barrels per day of refined petroleum products.[11] Haiti is largely dependent on cheap imports from Venezuela, which have been affected by the Venezuelan economic crisis.[17] 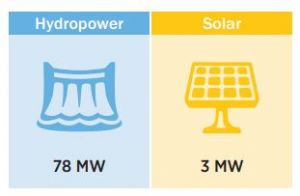 Renewable energy is seen as a path towards a more secure energy system, particularly in remote areas which could utilize solar on a smaller scale.[13] As of 2020, Haiti has tax reductions and exemptions in place for renewable energy projects.[3] Solar microgrids are a top priority for those interested in enhancing clean energy potential in Haiti, with more than 20 planned between 2020 and 2024 to replace diesel generators.[13]

A 12 MW solar plant being funded by the IDB and USAID was slated to be completed in 2023, as of September 2021, and would be the largest solar plant in Haiti.[12]

Haiti suffers immensely from climate change, particularly from hurricanes, flooding, droughts, and shoreline erosion.[6] Deforestation due to charcoal production is a devastating problem for environmental and human health in Haiti.[16] Since the 1980s, Haiti has lost approximately 70% of its forests, and reforestation projects are critical for flood reduction, erosion mitigation, preventing mudslides, and fighting against water pollution.[18] The voices of local residents and officials are often not considered when donors are funding disaster relief, resulting in inadequate attention to environmental concerns and sustainable construction.[18]

Retrieved from "https://www.gem.wiki/w/index.php?title=Energy_profile:_Haiti&oldid=289241"
Categories:
This page was last edited on 4 March 2022, at 10:31.
Content is available under Creative Commons Attribution-NonCommercial-ShareAlike unless otherwise noted.
Privacy policy
About Global Energy Monitor
Disclaimers