As of 2020, renewables - including wind, solar, biofuels, geothermal, and hydro power - comprise roughly 77% of Nicaragua's total energy supply, with oil providing the remaining 23%.[1] 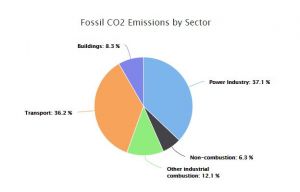 Nicaragua has one of the lowest CO2 emissions rates in Latin America, with 0.8 metric tons per capita in 2018.[5] Nicaragua refused to sign the Paris climate agreement until October 2017 on the grounds that the accord did not go far enough to tackle the problem of climate change.[6] Nicaragua has pledged to keep their change of per capita emissions between 2010 and 2030 to +1%.[7]

INE (Instituto Nicaragüense de Energía) is responsible for the regulation of the power and hydropower sectors.

In early 2020, Nicaragua began to plan for the creation of four state companies (Enigas, Eniplanh, Enicom, and Enih) to coordinate the importation, storage, distribution, and sales of oil and gas in Nicaragua.[9] 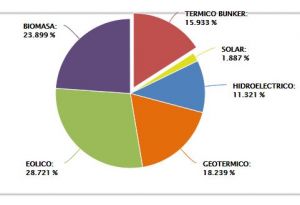 Electrical generation by type of resource in May 2021, Source: CNDC

Nicaragua generated 3797 GWh of electricity in 2020, with nearly 70% coming from renewable sources.[1]

For 2021 and 2022, the maximum electrical demand on the national system is projected at 710 MW, with April being the most demanding month on the electrical system historically.[12]

Nicaragua does not produce, consume, import, or export coal.[14]

Nicaragua does not produce oil.[6] The country ranks 115th for oil consumption globally, consuming 37,000 barrels daily during 2016 (approximately 0.25 gallons per capita).[15] In 2019, Nicaragua imported US$506 million worth of refined petroleum and US$254 million of crude petroleum, primarily from the United States and El Salvador.[16] The state-run company ENIH (Empresa Nacional de Exploración y Explotación de Hidrocarburos) was established in 2020 to focus on exploration and exploitation of hydrocarbons in Nicaragua.[9] 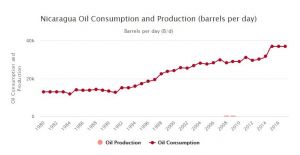 Key elements of Nicaragua's diversified renewables mix include geothermal heat from volcanoes, and biofuels such as sugar cane residue.[17] As the cost of solar energy continues to fall it will likely grow quickly, particularly in rural, impoverished areas.[17] Preliminary figures announced by Nicaragua's Minister of Energy and Mines show that renewables were responsible for 75.2% of energy generation in 2020, with geothermal (21%), wind (16%), hydro (15%) and biomass (14%) contributing the biggest share.[18] 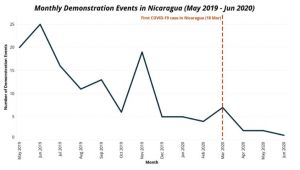 Nicaragua is considered one of the most climate vulnerable countries in the world.[19] Upon signing the Paris accord in 2017, the Nicaraguan government stated it was focused on green energy policies due to the environmental impacts the country was already experiencing from climate change, such as more frequent and more intense hurricanes.[6] Residents of rural areas are faced with both droughts and flooding, wreaking havoc on social stability.[19] The United Nations' World Food Program reports child malnutrition rates as high as 30%, in part brought on by climate change-related emergencies.[20]

Retrieved from "https://www.gem.wiki/w/index.php?title=Energy_profile:_Nicaragua&oldid=289270"
Category:
This page was last edited on 4 March 2022, at 13:40.
Content is available under Creative Commons Attribution-NonCommercial-ShareAlike unless otherwise noted.
Privacy policy
About Global Energy Monitor
Disclaimers