Ecuador's population growth rate has been declining since the 1970s and as of 2021 the population is approximately 18 million.[3] More than 60% of Ecuadorians live in urban centers.[3]

Ecuador is in the midst of it's Plan Nacional de Eficiencia Energética 2016-2035 which aims to promote energy efficiency within various sectors: transport, industry, residence, production, generation and all energy consumption sectors.[4] In October 2020, Ecuador joined the EITI (Extractive Industries Transparency Initiative) to promote accountability and be more transparent regarding their natural resources and earned revenue.[5]

Ecuador's greenhouse gas emission target for 2030 is a reduction of more than 20% from their Business As Usual emissions.[6] Ecuador has made great strides in reducing greenhouse gases as of 2021, such as their nearly 50% reduction in emissions from deforestation since 2000.[7]

MERNNR (Ministerio de Energía y Recursos Naturales No Renovables) is responsible for the non-renewable energy resources and mines in Ecuador.

Mining permits in Ecuador are assigned by the MERNNR, but have mining registry has been temporarily closed since 2018, accordingly, new companies can only gain access through the transfer of an existing permit which must be approved by the MERNNR.[8]

Prior to the start of activity on a mining concession, an environmental license must be obtained from the Ecuadorian Ministry of Environment and Water.[8] If any water sources could potentially be impacted, a second license must be granted. Likewise, community consultation with local indigenous groups is also required.[8] This permitting process is managed by the Unified Environmental Information System (SUIA).[8]

MEER (Ministerio de Electricidad y Energía Renovable) is responsible for the development and dispersal of electricity throughout Ecuador with an emphasis on renewable resources.[9]

).[8] EP Petroecuador is the prominent oil company in Ecuador.

As of 2017, 18.4% of Ecuadorians worked in the industry sector (defined as mining, manufacturing, energy production, and construction).[11] Employment in capital-intensive sectors in Ecuador- such as oil and energy- are reliable careers as they continue to see economic growth.[12] 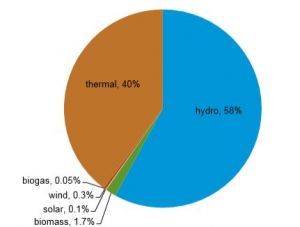 Electricity generation by fuel type during 2016 in Ecuador, source: EIA

Ecuador's Plan Maestro de Electricidad 2016-2025 aims to optimize the use of power generation resources -notably those from renewable sources- by encouraging efficient use, energy saving, reliable and high quality service, as well as by extending the national interconnected system and the Galapagos electrical sector.[14]

Ecuador has the potential to provide the entire country with completely self-produced energy- Ecuador currently produced 117% of it's own usage yet continues to trade energy resources with other countries.[15]

Ecuador produces no coal and accordingly must import all the coal it uses. In 2018, Ecuador imported 17 thousand short tons of coal.[17]

Ecuador has no new proposed coal sources or projects.

Almost all of Ecuador's 8.3 billion barrels of crude oil reserves are located in the Oriente Basin within the Amazon.[18] Nearly 85% of Ecuador's total energy supply comes from oil and natural gas.[4] In 2018, Ecuador was producing 517,000 bbl/day.[13] Natural gas continues to be important for maintaining a reliable and flexible power grid and is set to grow despite Ecuador's lack of infrastructure needed for capture and marketing of their own natural gas.[19] 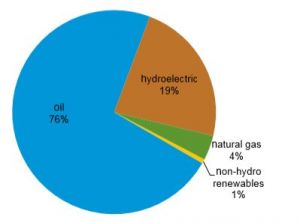 Petroecuador is largely responsible for importation of oil and natural gas, it imports small amounts of LNG.[20] In September 2020, the Ecuadorian government began to allow private companies to import some fuels for industrial and commercial use.[21]

New oil and natural gas projects in Ecuador are met with extensive amounts of resistance from local communities, especially indigenous groups.[22] Additionally, the Ecuadorian court system has even administered court orders to end projects found to be a violation of a healthy environment and human rights.[23] 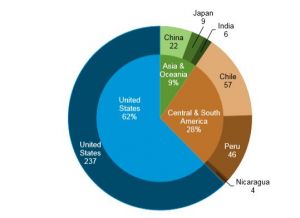 SOTE (Sistema Oleducto Trans-Ecuatoriano) and OCP (Oleducto de Crudos Pesados) are the two major crude oil pipeline systems which are both old and not used to their full capacity.[18] Ecuador was a member of OPEC (Organization of the Petroleum Exporting Countries) until January 2020.[24] Ecuador exports approximately 70% of it's crude oil.[18] The United States, Chile, Peru, and China are the primary importers of Ecuadorian oil.[18]

As of 2021, wind and solar development in Ecuador is still largely in planning phases, however, the Ecuadorian government intend to move forward with wind and solar projects in the coming years.[19] By 2030, hydropower is still intended to be the largest form of renewable energy in Ecuador despite backlash about the status of water resources such as the erosion of freshwater riverbeds.[19]

Ecuador is responsible for approximately 1% of the Latin American steel market.[25] Ecuador's iron ore deposits are estimated to be sizeable, but their copper, gold, and silver mines garner more attention.[26] The major steel manufacturer in Ecuador is Adelca who is noted for their metal recycling in order to make products for the construction sector as opposed to importing them. The sustainable nature of using an electric arc furnace (EAF) has saved on water, energy, waste, air emissions, and water pollution.[25] 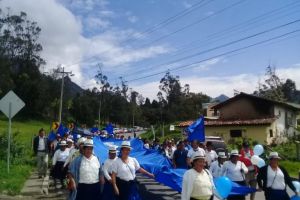 Protest to the opposition of mining in Quimsacocha held in the canton on Girón, source: Mongabay

Mining projects in Ecuador are frequently met with strife and protests from indigenous communities regarding the environmental impact and relatively small amount of jobs created for locals.[27] Human rights violations, forced evictions, property destruction, arrests, harassments, and murder as some of the threats environmental activists in Ecuador face.[28] The Coca River has suffered from supplying the Coca Codo Sinclair Hydroelectric Plant with an erosion of it's riverbed leading to many speaking out about the negative impacts of hydropower.[19] Relative to it's size, Ecuador has the highest annual deforestation rate in the Western Hemisphere.[29] In February 2021, more than 80% of the population of Cuenca in southern Ecuador voted not to allow industrial mining in the watersheds of five local rivers- mining activities will continue to be effected be votes as citizens organize against threats to their watersheds and livelihoods.[30]

Retrieved from "https://www.gem.wiki/w/index.php?title=Energy_Profile-Ecuador&oldid=227842"
Categories:
This page was last edited on 28 April 2021, at 15:05.
Content is available under Creative Commons Attribution-NonCommercial-ShareAlike unless otherwise noted.
Privacy policy
About Global Energy Monitor
Disclaimers