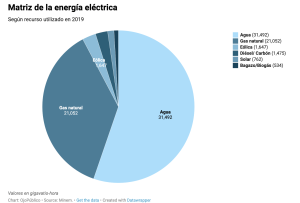 Renewable energies represent less than 6% of the total energy matrix in the country.[3] Hydropower is the most prominent form of renewable energy[1][2], representing 35.64% of installed electrical capacity and 57.85% of electrical generation in 2020.[1] 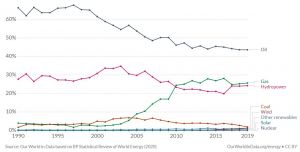 Peruvian energy consumption by source, 1990-2019. Source: Our World in Data

Although Peru only emits 0.4% of greenhouse gases globally, it is the third most vulnerable country to climate risks.[5] Most of the country's greenhouse gas emissions come from deforestation.[6]

Due to the impacts of the COVID-19 pandemic and political turmoil, Peru has made multiple adjustments to its original Paris Agreement 2030 target.[7] Former President Martin Vizcarra created a commission to address climate change before his impeachment and removal from office in November 2020.[8] In December 2020, the High Level Commission on Climate Change (CANCC), with the support of interim President Francisco Sagasti, presented a plan to increase Peru's emissions reduction target from 30% to 40% by 2030 if there was adequate financial support from the international community.[9][10] Peru aims to be carbon neutral by 2050.[7] 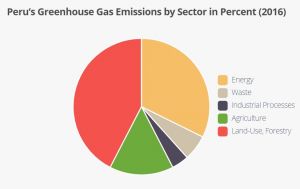 All large energy projects in Peru are required to undergo a detailed environmental impact study (EIA-d), which must receive final approval from MINEM before construction can begin.[12]

Mining permits in Peru are acquired through various agencies depending on the scale of the project. Generally, INGEMMET grants the mining concession titles for medium to large mining projects, while any small scale or artisanal projects receive permits through the DREM (Regional Directorate of Energy and Mines).[13] In 2021, efforts were made to streamline the mining permitting process.[14]

DGE (Dirección General de la Electricidad), a sub-agency of MINEM, has administrative responsibility for all aspects of Peru's electricity sector, including policies, regulations, expansion plans, distribution, and commercialization of electricity.

Perupetro, Peru's national oil company, is responsible for exploration and development of the country's hydrocarbon resources.[17]

Enel Generación Perú S.A.A., formerly Edegel, is the leading private electric power generation company in Peru, with approximately half of its energy coming from renewable sources.[19]

As of 2017, 12% of the Peruvian workforce was employed in the mining sector.[21] The Arequipa region has the highest level of mining employment.[22] 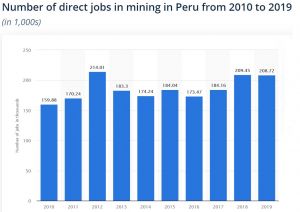 In 2018, 46% of Peruvian electricity was used by the transport sector, with an additional 27% used by the mining & industrial sectors.[24] Residential, commercial, and public use account for 25% of electric usage. Due to mining activity, Moquegua consumes more than seven times the national average of electricity (as of 2018).[24]

The MINEM issued a bid request in 2021 for the execution of 21 rural electrification projects that will assist over 91,000 individuals in 977 localities around the country.[29] 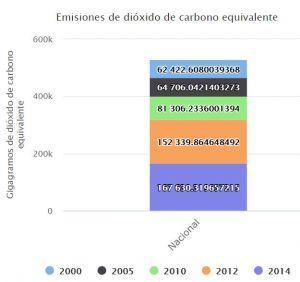 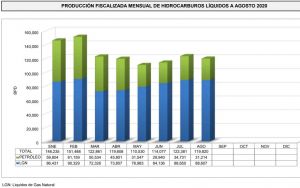 Monthly fiscal production of petroleum and LNG in Peru between January-August 2020, Source: Perupetro

Peru has enough natural gas to meet its own needs, and despite having close to 2,300 TWh in oil reserves, it must import for economic convenience from nearby nations like Brazil and Ecuador.[39]

The majority of Peru's crude oil imports come from Ecuador.[40]

Gas in Peru is primarily used for export.[38] Peru became the first LNG exporter in South America in 2010 after the opening of the Peru LNG terminal in Pampa Melchorita. The gas that is exported is extracted from Block 56, operated by Pluspetrol and Repsol's Block 57, both located in the southern Peruvian Amazon.[37] According to the Supervisory Agency for Investment in Energy and Mining (Osinergmin), in December 2021, there were 678.91 million cubic feet per day of hydrocarbons transported for export compared to 597.21 million cubic feet for domestic consumption.[37]

Peru has held talks with Bolivia regarding possible importation of Bolivian natural gas via the proposed Bolivia Peru Gas Pipeline.[41] Companies are consistently proposing other new projects, which must go through an exploratory phase before they can move forward.[35] Even though there are potential areas for gas exploration in the southern Amazon, companies would have a difficult time getting approval from the MINAM or MINCUL as most are close to protected areas. As a result, there are no new gas exploration projects in Peru.[37]

Peru's two most important operating pipelines are the 714-kilometer Camisea Gas Pipeline and the 1106-kilometer Norperuano Oil Pipeline. A third, long-stalled project, the Gasoducto del Sur, has been proposed to transport gas from the Amazon basin to power plants and population centers in southern Peru. Transportadora de Gas del Peru (TGP) is responsible for the transport of oil and natural gas within and out of Peru. Its system is formed by two sets of ducts: one for natural gas and the other for natural gas liquids.[42]

Renewable resources are abundant in Peru with more than 1,000 GW of installed capacity that could be achieved by using these technologies, mostly focused on solar and hydropower.[43] Peru's national energy policy aims to diversify the country's energy mix, with an emphasis on renewables and energy efficiency to meet the country's long term needs. The Peruvian government acknowledges the volatile prices of fossil fuels as another reason why there needs to be a shift towards renewables that are both high quality and reasonably priced.[4]

As of May 2019, renewable energy produced within Peru came from the following sources: hydroelectric (43%), wind (40%), biomass (12%), and solar (5%).[44] Peru aims to triple renewable energy production between 2019 and 2030; in 2019 the country maintained approximately 15,000 MW of energy generation capacity from renewables alone.[44] Peru was one of the first countries in Latin America to encourage the entry of solar and wind generation companies, however in 2022, only 5.9% of Peru's overall energy matrix was made up of non-conventional renewable sources.[3] According to data from MINEM and Osinergmin, Peru has seven wind power plants, seven solar plants, eight biomass plants and 30 mini-hydraulics.[3]

Solar energy is captured in the regions of Tacna, Moquegua, and Arequipa. Its production contributes to the nation's energy grid and aids the Photovoltaic Massive Program, which has brought electricity to 205,138 rural homes since the Peruvian government began implementing it in 2017. The regions of Piura, Lambayeque, Ica, and Arequipa are among those with the highest wind potential, with estimates placing it at around 20,000 MW. Peru's geothermal potential is currently estimated to be 3,000 MW, with the majority of this energy coming from the Southern Volcanic Axis (Ayacucho, Apurmac, Arequipa, Moquegua, and Tacna). The estimated range for biomass potential is 450–900 MW.[45]

Renewable energy in Peru is slated to grow by approximately 6% between 2021 and 2026.[46] By 2030, the MINEM expects non-conventional renewable energies to reach 15% of the total energy matrix in the country,[47] a contradictory fact considering that the Peruvian government has not promoted new auctions to allow these investments since 2015.[3]

SIDERPERU, Peru's oldest and largest iron & steel producer, is owned by the Brazilian company Gerdau. Key purchasers of Peruvian iron and steel include the United States, Colombia and Belgium.[48] Investment in new iron ore mines is planned for the Arequipa region.[49]

The Peruvian National Energy Plan created in 2014 is not overly enthusiastic regarding the country's goals of massification for renewable and clean energy. On the contrary, the report predicts that liquid and gaseous hydrocarbons (petroleum, gasoline, and gas) will account for 76% of the country's energy matrix by 2025.[3] In October 2021, the Peruvian government created a temporary multisectoral commission in charge of "evaluating the scope and actions to expand natural gas reserves and strengthen the hydrocarbon industry that allows its massification at the national level," according to Supreme Resolution No. 108-2021-PCM.[50]

The Law for the Promotion of Investment in Electricity Generation with the Use of Renewable Energies was established in 2008 by Legislative Decree 1002, with the goal of encouraging the bidding of clean energy projects. Since then, the Executive has only conducted four award auctions to producing companies. Despite the fact that the norm indicates that every two years the MINEM must evaluate the necessity for new projects, no new contracts have been signed since 2015.[3]

In April 2021, the then Minister of Energy and Mines, Jaime Gálvez Delgado, went to Congress to present the country's investment policy in renewable energy sources and pledged that the state's objective was to incorporate non-conventional energies (solar, air, and biomass) as 15% of the energy matrix by 2030. This proposal, however, lacks any real course of action and is not a part of a current government strategy.[3] There is no certainty about what the policy will be to promote electricity generation technologies with renewable energy resources.[51]

Oil spills put Peru's marine biodiversity at risk. On January 15, 2022, what is considered the worst ecological disaster in Peru's recent history occurred: A spill of more than 11,900 barrels of oil[52] affected 112 square kilometers of sea and coastline, including two protected natural areas.[53] The oil spill had devastating effects on three levels: 1) a direct impact on seabirds and aquatic mammals 2) in the intertidal zone such as beaches 3) and in the seabed, since over time the oil captures within its mass a large number of plankton and grains of sand.[52]

Deforestation in Peru hit a record high in 2020, the highest level in 20 years. This puts Peru at odds with its international commitments, such as the COP 26 Declaration on Forests and Land Use, which intends to cease deforestation by 2030.[54]

Oil and gas exploration contributes to deforestation, displacement, and soil & water pollution in the Amazonian jungle.[55] Companies have dumped waste products from mining and hydrocarbon development directly into Peruvian rivers and forests.[56] Between 2000 and 2019 there were 474 oil spills in the Peruvian Amazon, 65% of which occurred due to corroded pipelines and operational failures.[57] Environmental monitors are usually the first to report spills to the regulatory agencies.[58] Oil spills along the Nor Peruano Pipeline and elsewhere in the Peruvian Amazon have been devastating indigenous communities principally because the spills contaminate food and water supplies as well as crops.[59] Additionally, negative health outcomes often occur in oil spill areas, prompting protests and calls for oil and gas companies to pay for healthcare costs.[60] Despite orders to stop production following a spill, some companies continue to pump oil and use faulty pipelines.[61] Indigenous groups have protested against oil and gas companies for years.[55] Pipelines in Peru are also at risk due to seismic activity, heavy rains, and mudslides.[57][62][63] Billions of dollars are needed in order to adequately clean up contamination from oil spills in Peru.[64] The Peruvian organization PUINAMUDT, which represents four indigenous federations on oil blocks 8 and 192, regularly documents oil spills and their impacts on its Youtube channel. 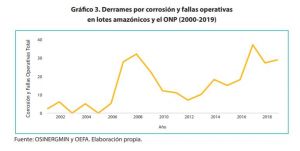 Spills due to corrosion and operating failures in Amazonian lots and the ONP (2000-2019) Source: [La Sombra del Petróleo]

Mining, particularly gold mining, has led to extensive water pollution in Peru.[65] Deglaciation due to climate change could limit Peru's ability to use renewable hydro powered plants in the future.[66]

17 environmental defenders have been killed in Peru since the beginning of the COVID-19 pandemic between 2020 - 2022.[67] The extractive sector accounts for 80% of all fatalities.[68] Environmental activists are killed in Peru for standing up to unlawful mining, logging, drug trafficking, and land smuggling. The majority of murders are committed by police, and they primarily take place when indigenous groups protest against projects in the extractive sector that could harm their lands.[68]

More than a thousand criminalization cases have been reported to the National Human Rights Coordinator (CNDDHH), at least 70% of which include environmentalists and indigenous leaders.[69] Criminalization, which takes the shape of complaints, tax investigations, and legal actions, is the predominant mechanism of aggression used against environmental activists in Peru.[69]