With high rainfall rates and a topography favorable for hydroelectric power projects, Colombia has developed hydro as its primary source of electricity, comprising two-thirds of installed capacity and electrical generation in 2020.[1][2] In times of normal rainfall, hydraulic generation is capable of supplying about 85% of the country's demand.[3] Fossil fuels provide most of Colombia's remaining electricity needs, with biomass, solar and wind making only minor contributions.[1]

Over the next decade, Colombia plans to expand its emphasis on renewables, raising installed capacity of other renewable sources from 2% in 2018 to 21% by 2030, with the largest growth in onshore wind energy.[4] The environmental permitting agency of Colombia, ANLA, approved the first permit for a large wind farm in 2018.[5] Simultaneously, Colombia anticipates growth in the coal sector to 2.4 GW of installed capacity by 2030.[4] 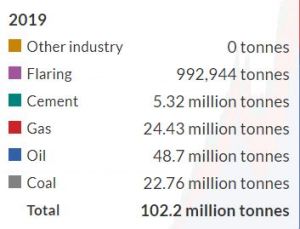 Land use change is the largest emitter of greenhouse gases in Colombia with approximately 58 %, followed by the energy sector that generates around 30 % of the country's emissions.[6] In December 2020, President Duque updated Colombia's NDC (Nationally Determined Contribution) to reflect a 51% reduction in greenhouse gas emissions (compared to their original reduction pledge).[7] In order to meet their greenhouse gas emissions targets by 2030, Colombia will need to enact policies to speed up the transition away from coal and fracking as well as preventing deforestation which accounts for 16.68% of total emissions in the country.[8] Long term, Colombia aims to be net-zero by 2050, making its CDN one of the most ambitious in Latin America and the Caribbean.[8] 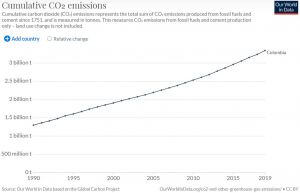 Source: Our World in Data

ANLA (Autoridad Nacional de Licencias Ambientales) is the national permitting agency for projects based on their environmental effects. An environmental permit must be obtained from both ANLA and the regional environmental agency.[9]

CREG (Comisión de Regulación de Energía y Gas), created in 1994, is responsible for promoting competition between the entities involved in the electricity sector and the regulation of electricity and gas utilities in accordance with laws 142 and 143.[10]

ANH (Agencia Nacional de Hidrocarburos) is the national agency in charge of administration and regulation of Colombia's domestic hydrocarbon resources.[11][12]

Majority state-owned Ecopetrol is Colombia's leading oil company and one of the four largest oil and gas companies in Latin America, alongside Mexico's Pemex, Brazil's Petrobras, and Venezuela's PDVSA; the Colombian government holds 88.49% of Ecopetrol's shares.[14][15][16]

Drummond Ltd. is the leading coal company in Colombia and creates approximately 10,000 jobs within Colombia.[12]

The Colombian electricity sector is comprised of both the National Interconnected System (SIN) and several isolated local systems in the Non-Interconnected Zones (ZNI),[10] where electrical services are provided by small-scale independent systems. The SIN includes generation plants, the interconnection network, regional transmission, interregional transmission and 27,916 kilometers of distribution networks.[19]

The three-year construction delay at the Hidroituango hydroelectric plant created concerns about near-term energy shortages in Colombia, leading CREG to establish incentives for projects which could bridge the gap until the opening of Hidroituango, which is expected to cover more than 15% of Colombia's energy needs.[10]

In November 2021, the CREG (La Comisión de Regulación de Energía, Gas, y Combustibles) announced Resolution 174 which will streamline the ability of distributed energy generators to give back to the SIN (Sistema Interconectada Nacional).[21]

IPSE (Instituto de Planificación y Promoción de Soluciones Energéticas) is an affiliate of the MME which focuses on meeting the electricity demands of rural, underserved areas in the non-interconnected zones of Colombia.

Colombia has the second largest reserves of coal in South America (after Brazil), and is the top producer of coal, mostly concentrated in the departments of Cesar and La Guajira.[23][24][25] Colombia produces more than 80% of the coal in Latin America[26] and is home to the region's three largest coal mines: Cerrejón, El Descanso and Pribbenow.[27] The federal government owns all hydrocarbon reserves while private companies are responsible for coal production.[28]

After the maximum historical production - 91 million tons in 2016 -,[29] the price and production of coal in Colombia fell in 2020 due to the reduction in global demand due to the COVID pandemic as well as the Cerrejón mine strike, but by November 2021 Colombian coal production had recovered significantly.[30]

After the fall in prices, Prodeco, a subsidiary of the multinational Glencore, responsible for producing approximately 21% of the national coal according to the Colombian Mining Association, renounced three mining titles: two in the Calenturitas project and one in the La Jagua, both in the department of Cesar.[31] Glencore, which had planned to close its mines and reduce coal extraction in Colombia in 2020, acquired 100% of the shares of Cerrejón - becoming its sole owner - in 2021.[32]

As of 2018, approximately 10% of Colombia's energy supply came from coal.[28] Colombia's five operating coal plants - the Gecelca, Termoguajira, Termopaipa, Termotasajero and Termozipa power stations - have a combined generating capacity of 1.6 GW (gigawatts).[27] Coal is the only fossil fuel in the country that does not have a carbon tax.[33]

Colombia is a notable coal exporter, shipping much of its coal abroad.[34] Coal comprises 13.7 % of exports and 83.8 % of mining royalties.[35] According to the Colombian Mining Information System (SIMCO), in 2020 Colombia exported 71,190 million tons of coal.[33] The country is the first exporter of thermal coal in Latin America and the fifth in the world,[35] only surpassed by Australia, Indonesia, Russia and the United States; Key markets for Colombian coal include the Netherlands, Turkey, the United States, Chile, Spain, Portugal, the United Kingdom, and Brazil.[36] In 2021, the country maintained 5.24% of the global coal market.[37]

Thermal coal is Colombia's second-largest export (after oil), but the country is seen as vulnerable to declining international demand, especially in key markets such as Turkey and Western Europe.[23] The MME has focused on increasing exports to Asian countries in the coming years, with China and India being the main anticipated markets for Colombian coal, as Europe invests more in renewable energy.[39] However, a veto of Russian coal as part of a package of sanctions against Moscow in 2022 allowed Colombia to expand its coal exports to the European Union - specifically with Germany.[40]

Colombia is the 19th largest oil producer in the world.[16] The departments of Meta and Casanare concentrate nearly 70 % of the oil reserves, while Ecopetrol maintains 66 % of the total proven oil reserves in the country.[41] Barrancabermeja refinery and the Reficar Cartagena refinery account for almost all domestic fuel processing.[24] 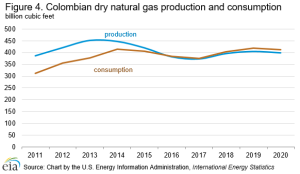 Demand for natural gas pushed Colombia to begin importing in 2016.[45] Declining natural gas reserves and production have triggered an uptick in LNG imports from the United States.[46]

Modernization projects for refineries and pipelines were the priority for Colombia between 2010-2020.[24]

Between 2018 and 2022, 69 new hydrocarbon exploration and production contracts were signed in Colombia.[41] In October 2021, the Colombian government announced that six natural gas pipeline projects were being prioritized in order to protect fossil fuel supply.[48]

Pipelines were targeted by guerrilla groups in Colombia during 2021, which has negatively affected both production and the environment; between January-September 2021 there were 28 recorded attacks on oil infrastructure (including pipelines).[50]

Policy support at the federal level and meeting the rising consumer demand for renewables in Colombia will contribute to a positive growth trend between 2020-2025.[51]

IRENA reported Colombia's total renewable energy as 13,552 MW in their August 2021 renewable energy statistics report, 93% of which came from hydropower from 33 plants in the country.[52][53] Due to Colombia's heavy reliance on hydroelectricity, the country is highly vulnerable to weather scenarios such as the El Niño phenomenon, necessitating the use of thermal energy as a backup. Accordingly, greenhouse gas emissions are particularly high during El Niño events.[54]

Wind energy is likely to see a significant trend in growth by 2025.[51] La Guajira is slated to attract wind investment due to class seven winds while Orinoco and San Andrés are attractive for solar development.[55] Biomass cogeneration plants could also gain traction in Colombia due to forestry and agricultural waste.[55]

The iron and steel sector is overseen by the Comité Colombiano de Productores de Acero, a member of the ANDI (La Asociación Nacional de Empresarios de Colombia). Ferronickel exportation from Colombia began in 1985, following the mining of the ore deposit Cerro Matoso.[56] In 2018 the gross production value of the iron and steel industry was 7.76 trillion Colombian pesos.[57] During 2020 exports of Colombian iron and steel fell by 17.1%.[58] Colombian steel producers focus on long steels (80% of which is rebar) and expect to see growth due to infrastructure projects.[59] The five main steel producers in Colombia are: Acerías Paz del Río, Gerdau Diaco, Sidenal, Sidoc, and Ternium Colombia.

In 2021, the MADS (Ministry of Environment and Sustainable Development) launched the Colombia Carbon Neutral Strategy (ECCN), an early action mechanism that forms part of the E2050 Long-Term Strategy. In March 2022, Iván Duque's administration approved the 4075 CONPES (National Council for Economic and Social Policy), a policy that establishes guidelines, strategies and actions for the energy transition and decarbonization for the next 6 years.[60]

The ecosystems and biodiversity of Colombia are directly threatened by extractive energy activities.[61] The reinjection of production water from the oil and gas industry has led to seismic activity in Colombia.[62] The wetlands in Colombia are at particularly high risk from energy related pollution.[63]

Water pollution by oil & gas operations negatively impacts indigenous communities.[62] In the municipalities of southern Guajira, grave violations of the right to water due to the extraction of coal in the area have been found including: 1) the contamination of drinking water 2) the ineffectiveness and lack of regulations regarding to the measurement of pollution indices by control agencies 3) the disappearance of water sources 4) irregular processes for the diversion of riverbeds and procedural failures by environmental authorities to protect the rights of the communities, that may be affected by a river or stream diversion project.[64]

Communities threatened by the environmental effects of energy are impoverished, lack adequate health services, and struggle to have their voices heard at the national policy level.[61] There have not been any independent studies determining to what degree mining activity can have negative effects on the health of communities subjected to the direct impact of it in Colombia.[65] A clear example of this can be found in the indigenous reservation of Provincial in the department of La Guajira, where the Wayúu community has presented serious respiratory, heart, skin, and stomach conditions, and some types of cancer.[66] Despite a court order - upheld by the Constitutional Court in 2020 - ordering Colombian authorities and the companies that own El Cerrejón to improve air quality and reduce mine damage to residents, not enough has been done to protect community members.[67]

The Colombian Constitutional Court has protected the rights of communities affected by mining on several occasions: the Afro-descendant community of Tabaco,[68] the indigenous reservations located in the 'Black Line' of the Sierra Nevada de Santa Marta,[69] and the Wayúu community.[70] Although the legislative branch has agreed with the communities many times, the extractive companies in many cases have not abided the rulings against them.

Lack of accountability in the Colombian energy sector allows for problematic outcomes.[71] The gaseous nature of coal deposits in Colombia has caused a large number of occupational accidents and deaths.[26] Poor ventilation, poor worker training, and inadequate regulation are all factors in methane-related accidents.[26] 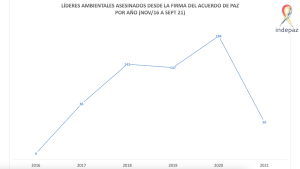 Environmental leaders assassinated since the signing of the peace agreement. Source: indepaz

In Colombia there are more than 152 socio-environmental conflicts due to mining, energy, agro-industrial and infrastructure megaprojects.[74] Colombian activists continue to advocate for the environment and to push bills prohibiting the exploration and exploitation of new reservoirs.[75]

Retrieved from "https://www.gem.wiki/w/index.php?title=Energy_profile:_Colombia&oldid=349430"
Category:
This page was last edited on 7 July 2022, at 15:41.
Content is available under Creative Commons Attribution-NonCommercial-ShareAlike unless otherwise noted.
Privacy policy
About Global Energy Monitor
Disclaimers